When I originally thought of what it would be like to write this, I envisioned Tim Duncan as being the subject. Looking back though, I think the fact that Shaq came into the league when I was just 8 years old, makes it a little more poignant, though that's no slight at how I view Duncan's own impact on my life. 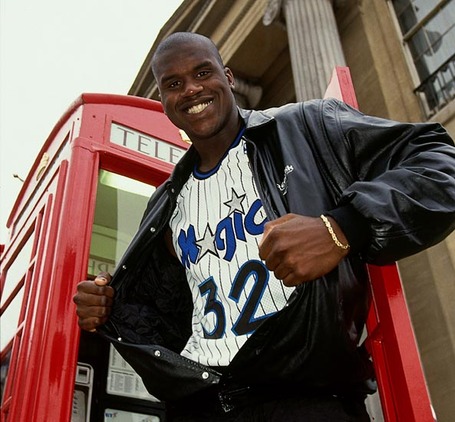 I was sitting at lunch with a friend I hadn't seen in several months when I received a text from another friend, informing me that Shaquille O'Neal had announced his retirement. Like most, I had expected this moment to arrive at some point over the summer, but given that the present company I was keeping wasn't so much of a sports fan, I was limited in precisely how I could elaborate on the announcement. I ended up playing it relatively safe and simply informing my friend across the table that Shaq had retired, a statement that elicited only an acknowledging "Really?" from him, though the manufactured inflection perched atop that single word was obviously not meant to glean any further information. Taking the hint, I quickly resumed our previous conversation and didn't mention another word.

Arriving back at home, I quickly sat down to hammer out a few of my thoughts on the matter. Though, like I said, I had toyed with the idea for long enough in my head that I had no fear of forgetting what message I wanted to get across, I wanted to do so in a timely manner, and not be any more of a latecomer to the party than I already was. I can't say for certain that I hold this opinion as part of a larger, universal group of people, but as I've said before, I've often approached things a little bit differently than those whom I would consider to be peers, etc. Bluntly, I am not writing this to accompany the hundreds of career retrospectives that are, as I type this, aligning themselves across the internet in a vain attempt to be the first, or the most widely read. To me, Shaq's career can be summed up, quite succinctly, as something of a modern marvel. Despite the various opinions people have of him throughout his career, he's as close to a force of nature as any athlete has ever managed to come, and to an 8 year old kid, as I was when I first got a glimpse of him, that's really all that needs to be said. To be fair, one could make the assertion that this really isn't even about Shaq, but about something quite larger. 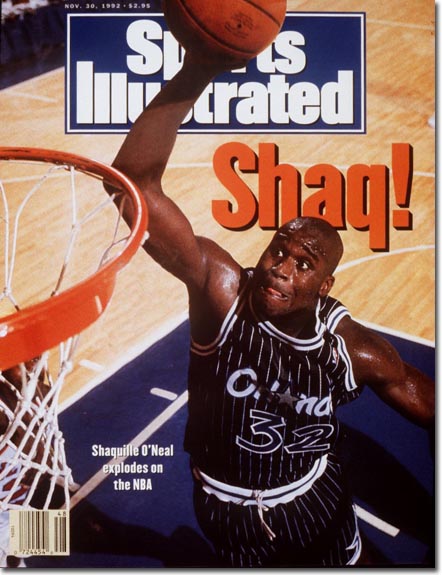 I feel that, though I admittedly haven't even touched the tip of the iceberg, in the years since I started college, things seem to have moved at such a pace that to say those moments are fleeting would imply that I was successfully able to grasp one for longer than the precious seconds they all seem to last. Though I won't fool anybody by telling them that I'm old, neither would I fool them by telling them I'm still a kid, despite my occasionally voracious attempts to remain so. In my efforts, one of the things I've always been able to cling to was the fact that many of the athletes to whom I looked up as a child, remained active. Much like spending time with your parents can make you feel a bit younger, turning on the TV and seeing those athletes can as well. Though throughout his career I viewed him with fluctuating affections, I can say with utter certainty that simply knowing he was there was enough to convince me that I hadn't aged all that much. Though the feeling isn't specific simply to him, it's fair to say that his presence, outside of mainly Michael Jordan, was something that managed to tie itself to your conscience, though perhaps that's just the impressionable mind of my 8 year old self talking. In any case, receiving that text, though nothing more at this point than a simple formality, finally brought to the stage the fact that I had aged twenty years, just like Shaquille had.

I've felt for some time now that athletes have a way of inspiring that childhood sense of awe in people of all ages. Though in these days it's easy to get lost in the finer nuances of their lives, those themselves having an impact on how much we choose to like them, the fact is that at their purest sense, seeing a spectacular athlete simply perform will inspire the same feelings in both the young and old alike. As kids though, we tend simply to look up to these athletes, not yet being able to grasp the things that might cause us to dislike them at later, more mature points in our lives. We also are unable to fully comprehend that a day will come at which these very same athletes will no longer be there. To see such a day come much later in life and to look back and acknowledge that roughly twenty years have passed in the meantime is somewhat humbling, and yet endearing as well. 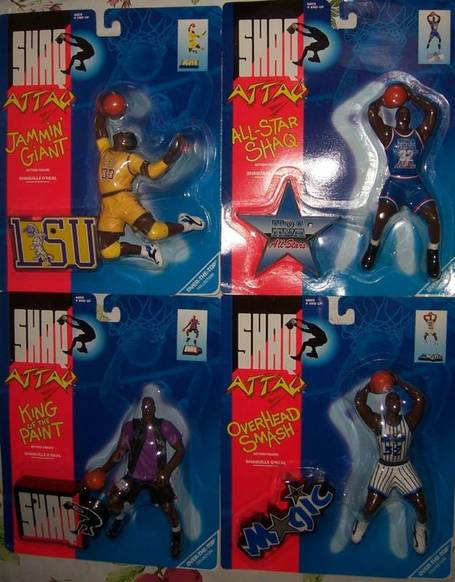 To me, Shaq represents a large part of my childhood. At one time, he was unquestionably my favorite player, though I admittedly knew a hell of a lot less players back then. I remember having Shaq posters, and Shaq Jerseys, as well as walking through the toy aisle in the grocery store near our old farmhouse and seeing Shaq action figures. For those of you who remember Starting Lineup figures, you'll probably remember that Shaq had his whole separate line of toys, not to mention the fact that you couldn't open a comic book without seeing an ad for the various movies Shaquille was cast in. In full effect, he was a marketing phenomenon that soared above all but MJ, who stayed ahead solely by virtue of his vaunted sneakers. To be fair, nobody else in the league had that, and to a kid, that meant something. I grew up viewing Shaq just a little differently than I did any other basketball player.

That having been said, I admitted to viewing him with varying degrees of affection over time. Though I've always liked him if asked the question directly, I'll also admit that he was a little beyond frustrating to play against, as my allegiance to the San Antonio Spurs grew. The fact that he was simply unstoppable wasn't amazing so much as it was teeth-grating. Despite effectively being one of my childhood heroes, knowing that my favorite team was relatively powerless to stop him was a bit of a sticking point. Still, a certain amount of nostalgia kept me safe for ever taking the plunge and saying I hated him, Instead, I stayed firmly within the realm of simply wishing he was on my team. The charisma he had during my formative basketball years was enough to simply cause me to circumvent him and irrationally place all the blame on his cohorts, like Rick Fox or Nick Anderson, who appropriately seemed to always irksomely score just when it seemed San Antonio had managed to corral Shaq with some sense of effectiveness. I think it was that same charisma that kept him firmly planted on that mountain of awe-inspiring personalities, even as I unsuspectingly got older. 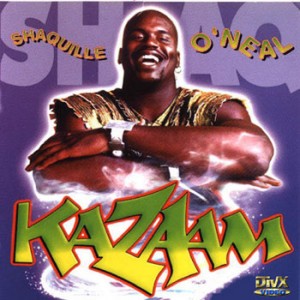 By the time I'd graduated high school and moved on to college, Shaq's body began to show the same signs of wear and tear that befall every athlete, although the symptoms seem to magnify whenever that athlete is among the larger of his breed. Though he wasn't the first to experience them, I felt that it carried a bit more relevance for me than did the decline of, say, Patrick Ewing, whose abilities had already begun their descent when I started paying more attention to basketball. It was different too for Shaq than it was for another childhood hero of mine, David Robinson, who was gracefully able to not only switch his role on the team, but also his place in the limelight, as Tim Duncan began his rise to prominence. That's not a slight against Shaq's, so much as it is an acknowledgement of his singular ability to dominate a basketball game. While it may be an indictment of sorts of Shaq as a one trick pony, at the end of the day, his unique ability to control the entire flow of a game the way he did sort of lends itself to the desire to continue playing that way, even though the pratfalls of age always seem to eventually win out. Still, despite my own silent aging, Shaq's simple presence on the court was enough to convince me that little, if any time had actually passed. Looking back, that may be the single most impressive quality of all.

The ability to cause one to hold onto years of admiration while simultaneously preserving that childhood sense of awe is by no means unique to Shaquille O'Neal. Hundreds of legendary athletes across all major sports have likely had a similar effect on other for many years, and other yet will continue to do so. As I briefly mentioned, the issue is one that is larger than Shaq who, to me, was that athlete. In watching Shaq's career come to a close, I in turn am forced to acknowledge that I'm no longer the kid I was when he first reared his head. That, I think, is something that possesses a relevance to everyone, regardless of what age they may be.

I can't say for certain exactly what quality makes these people seem so ageless to us, giving us a bit of agelessness in return. I think I touched on it when I mentioned the age we were when we first come to know them, more so than it is any one particular quality that these individuals possess. While I can say that it's not necessarily pleasant to watch Shaq walk away from the game, I sense that's more because now I'm forced see those twenty years in terms of my own life, looking in the mirror and no longer seeing that 8 year old kid in the oversized Orlando Magic jersey. As far as Shaq himself goes, the fact that he was able to seemingly place such a large part of my life on pause will always be special, no matter how much older I have to get.

Consider this my thanks. 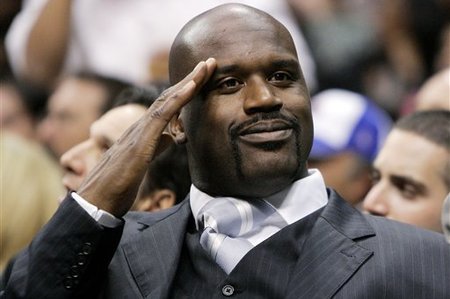