Share All sharing options for: Grading the Position: Shooting Guard

Let's move over and check out the Shooting Guard spot. A much less controversial postion amongst Spursdom than is the PG spot. I think most of us will agree on the fact that this position has been on of our best filled positions for the better part of the last decade.

On to the reviews and grades. 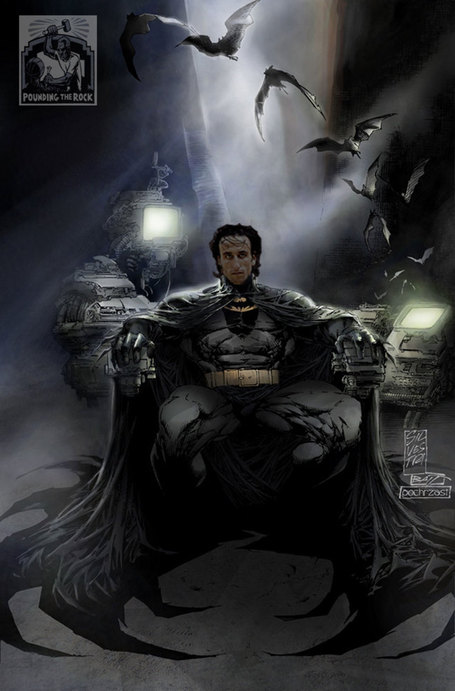 Bat Manu sits upon his throne

The Sickness was sick all year long. He helped the Spurs off to their best start ever and was pretty much the man for the first half of the year. He even earned his second All-Star appearance. The only reason I'm giving not Manu a plus after that A is that fact that I think he fell in love with the 3-pointer too much this year. He shot 35% from downtown, but he took the most 3's of his career: 441. More than 50 over his previous career high in attempts. A minor blip in the overall very solid year of Ginobili.

Unfortunately, Bat Manu was dinged up in the last game of the year against the Suns. A sprained elbow caused him to miss Game 1 of the playoffs and the Spurs missed him badly. Manu came back to lead the Spurs to victory in game two and put them in position to win Game 3 and Game 6, but alas the Spurs and Manu fell short. Manu's efforts in the playoffs were great. He often drew the best Memphis defender and the Spurs offense was best with him on the floor and the defense seemed more likely to get the steal or big rebound with Manu leading the way.

Overall Manu was great. He proved he's got a least a few more years of high level play. The biggest question mark with Ginobili is how will he fare when he starts back with the Argentina National team in the summers? I think he'll probably be alright. I would expect Pop to start bringing his minutes down as the years move forward. There's no question in my mind that Manu will be key for the Spurs in the next 2-3 years if they want to compete for a title. 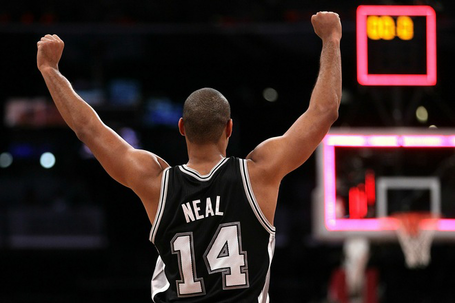 The Nail Gun was the Spurs rookie of the year. Neal shot 42% from 3-point range and 45% from the field. Neal's willingness to stick his nose in on defense and hustle earned him solid playing time all year. Neal showed all year that he would be agressive both offensively and defensively. Gary was basically everything Roger Mason, Jr. wasn't last year. The only real downside to Neal's amazing regular season was that he seemed to fade late in the year.

Gary's playoffs didn't go as well as we all would have hoped. In Game 1 when the Spurs were without Manu, Neal had an awful game going 3-12 for 8 points in 22 minutes. He bounced back in Game 5 and hit the a buzzer beater to send the game into overtime. Neal only shopt 26% from downtown in the playoffs.

If Neal can make improvements next year, I see him being a vital part of the Spurs future. Neal has ball handling ability which gives the Spurs yet another combo guard. I think Neal is best suited for the Shooting Guard position as hit seems to fit his skills the best. Neal and George Hill will more than likely be battling for the #2 SG spot for the foreseeable future.

According to the interwebs the James Anderson is listed as a SG, but I've arbitrarily decided to put him in the Small Forward spot.

Assuming Neal can improve and Hill continues to contribute this spot is solid for at least another year or two.

I wouldn't mind seeing the Spurs add a veteran defender at the SG to help with the depth of this position. The Spurs tend to use Manu, Neal, Hill and Parker as combo guards. Having a true PG would allow the Manu, Hill and Neal to all play at their more natural position of Shoot Guard. That said, I think I'd rather have the defensive minded 2 guard rather than a natural point as I believe it to be a bigger need.