Throwing It In The Ocean, And Looking Up To The Stars

Share All sharing options for: Throwing It In The Ocean, And Looking Up To The Stars 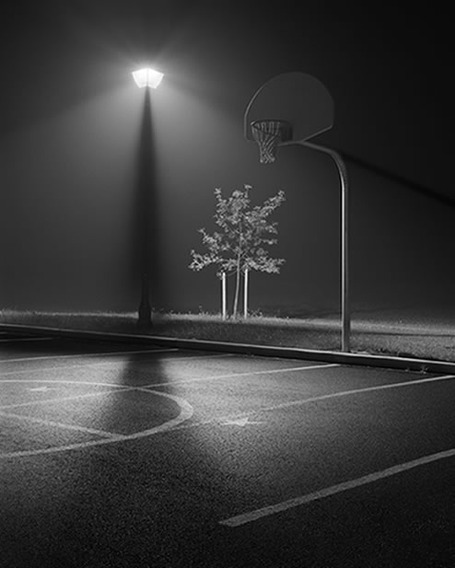 Basketball has, for as long as I've known it, had a quality that I compare solely with fly fishing. Though an actual game being played tends to add a more structured dimension to the act of getting a ball inside the hoop, one could just as easily find themselves alone on a court or in a driveway, rhythmically arcing shots by themselves, in much the way a fly fisherman repeatedly casts his line over the water. You can effectively lose hours in the pursuit of each, with the failure to make a shot or catch a fish doing little to derail the utterly and gloriously hypnotizing effect of the act itself. For as long as I can remember, though I can think about games I won, or the significance of the shots I made during them, I always think of basketball first and foremost as just me shooting the ball alone. Sometimes I'll lose all the daylight I have left, wandering over that river of concrete, trying to catch that elusive perfect shot. Whether or not I do has never been the point.

When I was a kid, I was seldom able to lose as many hours shooting baskets as I have been as an adult. Though I lived in a safe neighborhood, one of my parents would make a point to make sure I was indoors before the last light left the sky. In those days, I usually whiled away time on an old sport court, owned by a family whose own child had long since grown up and moved away. Though I'd occasionally find ways to make a game, it was rarely more than HORSE or Knock Out, which was about all most of the girls in the neighborhood would ever volunteer to play. Out of necessity, I often found myself finding ways to make use of solitude. Sometimes this meant that I'd spend a relatively inordinate amount of time trying to heave shots in from half court, but usually I'd find myself playing in my own games, my head far away from reality as I pretended I was any one of a dozen players I looked up to on TV. Having spent much of my younger days doing this, I can vividly recall hours that I wasted doing so. Still, finding myself doing it the other day, more than twenty years later, left me surprised.

I've always valued my ability to effortlessly remove myself from reality at a moment's notice, though as I've gotten a bit older, I've run into more and more people and situations who say it's a curse more than the blessing I take it for. Despite having never been one to listen too hard to the drummer by whom others choose to walk, most would agree that age, however young, tends to fell many fantasies with the passing of time. That was what left me so surprised the other day. Perhaps it had happened even many times before and I simply wasn't cognizant of it, but it was indelibly present and quite impossible for me to ignore.

These days I usually shoot baskets at a small school that's hidden away around corners, just a few blocks from my house. Though I don't consider myself shy, there are days when I simply don't feel like playing a game, and the crowded gym nearby makes that hard to avoid. Nobody much comes to the school in the evenings, and the few people I do manage to see are usually teachers leaving a tad late, or the custodial staff getting a jump on their nightly schedule. The solitude gives me the chance to work on things I feel are lacking, without feeling like I'm in the way or holding up the formation of a game. Though I am alone however, doesn't mean that I treat the games I play with myself any less seriously than I would were others present. I often treat my isolation as a chance to be fully and truly hard on myself, something I don't feel is appropriate in a crowd of strangers. Still, my insistence on summoning better from within myself can, and often does, have the tendency to drain my own relaxation and enjoyment, if not simply curtail my time spent on the concrete. After thinking on it, I think it was precisely this that summoned the recent bout of make believe.

Having an off-night by my standards (which are always unrealistically high), I found myself standing at the free throw line, determined to make enough to allow myself to leave, each miss forcing me to stand there a second longer in an increasing frustration, like a passenger waiting for a ride that isn't coming. The rare appearance of another on the courts, a father and his young son, had forced me to spend most of my frustration in silence. As they walked away, I found myself relieved simply at the fact that I could swear at myself out loud. A quick shout to the waiting air, and I suddenly found myself walking towards the other end of the court, as the ball rolled stubbornly out of the rim and cascaded off the court. I stood in silence for a moment, sweat hanging just above my eyes, before deciding to swear one last time and awkwardly punching the nearby air. With that, I walked over to retrieve the ball, and decided to take one last shot before calling it a night.

As I searched the court for a spot I felt confident from, I took a couple of dribbles, yet only because I feel awkward carrying a basketball without doing so. An instant later however, I found myself dribbling along the baseline, doing the "Dream Shake", before tossing the ball into the frayed and waiting twine beneath the rim. Perhaps it was simply that I made that shot, but all of a sudden I wasn't just acting like Hakeem, I was Hakeem. I honestly can't recall any point since my youth during which I provided the commentary for my own play, but in short order I was calling Jordan over Ehlo, as I did my best to glide along the free throw line before releasing my shot. I found myself lamenting loudly to the open night sky that Robert Horry had been left open as I took, and made, the game-winning threes for which he'd later be known. Tim Duncan effortlessly banked in his pigeon-toed jumper with ruthless efficiency, and Tim Hardaway made almost all of his hard driving floaters. All the heroes from my younger days showed up, and though it sometimes took them more than one try, they all made the shots I remembered them for. I gave each one of their shots the best standing ovation I could give them with the same audible exhale I gave them on that sport court all those years ago.

I find it interesting, after thinking about it a day removed, that I clung to the stars that adorned the posters, jerseys, and video games I had as a kid, rather than opting for the newer models I've watched night in and night out in the intervening years. I chased all the daylight off that basketball court, leaving me with ample time in which I could've been Kobe or Lebron, and yet I never once found myself calling them off the bench. All of that night's court time had been reserved for players I looked at as genuine heroes when I was a kid. Being introspective, I wondered about that, before quickly and confidently arriving at the conclusion that the event itself, me pretending to be those players, came from a time in my life where fantastic, larger than life moments were expected from the mind of an 8 year old kid with a basketball. The players themselves were simply just fortunate enough to be there at a time in my life when it was OK for me to have them as my heroes. I have no doubt in my mind that there are kids the world over who look at Kobe and Lebron the same way I looked at my own heroes. The ever present passing of time dictates this reality. Twenty years later though, I doubt I'd be faulted for thinking those fantasies would've been a little further away than they evidently had been. As someone who daydreams and imagines to a fault, I can say that I'm glad it came back.

Basketball is lucky in that it provides this type of accessibility to the fantastic. The fact that one can find so many different ways to whittle away minutes or hours by themselves at a basket is largely the reason, if not completely so. No other sport offers such a quick release from that solitude, because no other sport is as functional without the presence of other people. Just like you can wander downstream, casting by yourself, you can wander the basketball court finding ways to lose yourself in the pursuit of the perfect arc, whether it be from near or far. I'm thankful that my very adult frustrations caused enough to fall away that my solitary pursuit of making enough shots yielded instead to an altogether different pursuit. The result was well worth it. I'd forgotten that an hour or two earlier I was ready to leave in a self imposed, arbitrary anger. Instead I walked away from the court that night with a smile on my face, happy that I'd remembered something from a different time and place.

Happy that, for the first time in awhile, I'd simply played.