Share All sharing options for: Grading the Position: Coach

I'm going about this with a little trepidation. I am not an expert, although I do play one on the internet. I went through and graded professional basketball players based solely on my interpretation of their play throughout the year and post-season. I feel like I can say with a fair amount of accuracy if a player preforms well or if they shouldn't be on the floor. Of course there is nuance of the game that escapes my untrained eye, but it's pretty easy to see if a guy can guard somebody or hit a shot. Coaching is a different animal.

On one hand you've got the easy to spot things. The offense was different this year. It was up tempo and faster paced. The Spurs didn't rely on Tim Duncan nearly as much on the offensive end. That was easy to see. It was easy to see that Pop really like Gary Neal. He played well and was rewarded with more playing time. These type of things are easy to spot, but the day to day improvement of a team is harder to see and keep up with. If you do see it, how much credit goes to the coach and how much to the players?

One thing I know I can't do is grade the coaching staff individually. I have literally no idea how each assistant coach and even Pop himself had an impact on this team. I will grade Pop out because ultimately he is the decision maker and decides how this team goes, but really it'll be for the entire coaching staff. 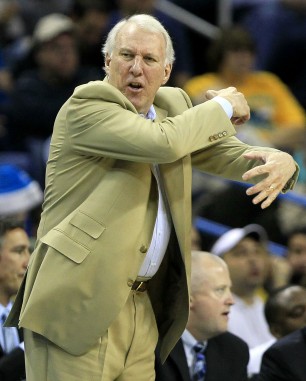 Before the year started I had some cautious optimism. I thought with Tiago Splitter coming in and Tony Parker and Manu Ginobili taking the summer off the Spurs might have another good run in them. I kind of expected another 50-54 win season and finishing in the middle of the pack in the Western Conference. Then the season started. It seemed like the Spurs were unbeatable as they rolled out to the best record in the NBA. Everything was going right. Our stars were playing like it and our role players were giving them a run for their money.

The great start was not surprising just because of all the wins, but it was HOW all the wins were coming. Our beloved Spurs weren't playing suffocating defense, but they were running teams out of the building. The offense was amazing leading the league in efficiency. The defense was good, but not nearly as prolific as the offense. The question on all of our minds was, how did this change come about?

From several stories floating around about the Spurs it was clear that Pop had sat down with his staff and decided that this team would need to approach things differently if there was going to be success this season. It was an incredible job of coaching. Pop basically changed he his coaching persona. He emphasized up tempo and more of a guard oriented offense. It was beautiful to be hold.

It seemed like sometime before, or maybe just after, the All-Star break that Pop decided it was time to start getting the defense up to the normal standards. The offense seemed to slow down and DeJuan Blair was taken out of the starting lineup in favor of Antonio McDyess. I'm not sure the defense every really improved, but you could see the effort was there to focus more on slowing the games down and turning up the defense. As the season progressed and the Spurs got ready for the playoffs it seemed like the defense was about where it had been all year, but the offense had dropped off significantly over the last 1/3rd of the season. This continued into the playoffs as the Spurs defense was serviceable, but by no means dominant. The offense was very inconsistant and couldn't be relied upon whatsoever.

I thought that Pop was extremely courageous in changing his whole approach after years of success. I think it showed a humility that many fans didn't think Pop had. I think the fundamentally flaw is the change was that we didn't have the personel to compete on the defensive end despite the improved offense. In the playoffs you will end up facing elite defensive teams and you've got to be able to respond with defense and clutch offense. The fundamental change was what this team need in order succeed in the regular season. I think Pop saw that the defense wasn't where it needed to be and tried to change mid-stream on his offensive first philosophy. I think the changed hurt the offense more than it helped the defense and ultimately cost the Spurs more than it helped. 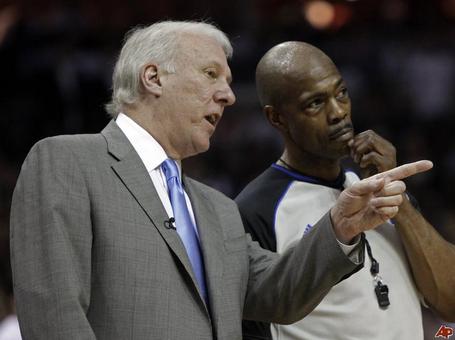 That's called a foul...you job is to blow the whistle

Pop gets a low grade in the playoffs due to his inability to see the need for the use of Splitter. It completely reminded me of the Dallas series two years ago when George Hill was a rookie and Pop refused to play him early in the series. It seemed like Pop had learned from that by playing Blair and Hill in last years playoffs, but alas old habits die hard. Ultimately I think that playing Splitter would have helped the Spurs have a better chance of beating Memphis, but I think that even had they gotten past the Grizzlies the fate of this team would have been a second round exit.

Overall I think Pop is still a very solid coach. He's got to be one of the best in the business, but it seems to me that he's lacking the ability to adjust on the fly that he once had or that an assistant once helped him with. I am extremely encouraged with Pop's off-season adjustment last year and I hope that he and the staff can continue to find ways for this team to improve. I hope he and the staff are willing to learn from apparent mistakes like not playing Splitter and grow from those experiences. I think this team is better with Pop than without him.