The Beauty of a Spur-less Playoffs

Share All sharing options for: The Beauty of a Spur-less Playoffs

It's one of those things you don't really think about when you're watching your favorite team claw their way through each game. Truth be told though, there's a lot to enjoy. The difference is, now I can RELAX and enjoy it. 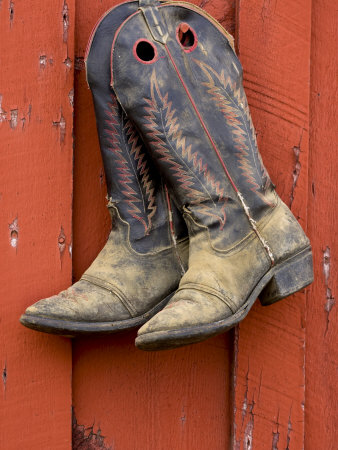 Take it easy there. Those Spur-less boots are only hung up temporarily.
via imagecache6.allposters.com
Each year it seems like I forget how exciting these games can truly be when they don't have my favorite team attached to them. Looking back though, I can distinctly remember each one having a palpable feeling of life and death whenever one of the teams playing was San Antonio. In 2005, I can remember kicking a hole in the pantry door during game 3 of the Finals, when the Spurs just decided they didn't feel like showing up to put the choke-hold on. In 2006, during the Maverickss series, I'm pretty sure I pulled a Bill Swerski and had a string of heart attacks that could only be rivaled by some crazy ultra combo in Tekken. In 2007, I watched my Spurs take the court immediately after breaking up with my fiance, and caring more about whether or not Bruce Bowen could break up the Suns offense again. Looking back, the years where we won the whole thing were the easiest, because then there weren't anymore games to watch. Until that following October anyways.

This year, I've actually taken time out of my schedule to watch games after San Antonio was eliminated. Where previously I'd just find other ways to occupy my time, I've found that I was actually missing out on a lot. Sure, I'd catch games every now and again, but this year I've watched nearly all of them, save of the one I missed while I was driving back to Austin the other night. Save for the part where we don't have a fifth banner to hang, it's been nice watching these games and not having a care in the world.

To me, what seems different about this year's cadre of games is that they're all taking place in match-ups that carry actual, genuine story lines. Unlike most years (when ESPN trumpets some supposed plot lines that really don't exist) there's something to be said for each match-up. The Mavericks/Lakers series pitted Dirk's solemn quest for the One Ring against the over-hyped Lakers Machine and their quest for another 3-peat. The recently begun Bulls/Heat matchup finds the preseason Golden Children going up against a classic Eastern Conference contender, crewed entirely by Derrick Rose and assorted riffraff. And before Oklahoma City proved me right and sent the "simply good" Grizzlies home, there was the league's young scoring champ, Kevin Durant, attempting to fend off the wild upstart posse from Memphis. The only usual suspect we've really had this postseason, aside from most of the same teams from the West, is Mike D'Antoni proving yet again that his teams have no ability to ever do anything meaningful.

For me, the one consolation I take from the Spurs no longer being in the picture is that I can legitimately pull for Dirk to win a championship. I didn't do it in 2006, because I wished ill will upon the entire Mavericks team for vanquishing the Spurs -- which is precisely the same reason I wanted Memphis to lose as well. I've never had much of a bone to pick with Dallas, because I've always liked Dirk, and I actually think Mark Cuban (or anyone who pisses off David Stern, for that matter) is great for the NBA. Dirk is a fully functioning member of a very elite list of all-time great players, and we should feel nearly as fortunate to watch him play as we do while watching our very own Tim Duncan. I feel like a banner hanging from the American Airlines Center would be infinitely preferable to the Miami Heat knocking over the proverbial first domino by proving that hiring mercenaries is the way to win titles in this brave new world. So it becomes fairly obvious that I do have some stake in the games, in terms of teams to pull for/against, but I'm able to enjoy what I'm watching for what it is. "Non-Spurs Diet Playoff Male Soap Opera Stress Lite Basket Games Jr." 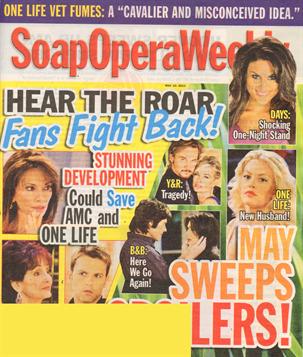 It's ESPN: The Magazine for the real soaps
via covers.magazine-agent.com

It goes without saying that I've experienced what are, by far, the greatest times whenever the Spurs win, but there is a certain stress that comes with those games as well. Back when it was championship season, I'd usually go about the day in a state of anticipation that didn't really qulify as excitement so much as it did just plain old nervousness. Sure those times were fun; they had the possibility of a truly unique excitement of "my team" winning a title to go along with them. The point though, is that there was a price to pay for that, and though that price is unquestionably worth it, as Spurs fans (who've gone a collective 4-0 in Finals appearances), we don't necessarily know the flipside all that well. I'm fairly certain there are some Bobcats and Bucks fans enjoying the hell out of the playoffs right now.

Though at times the NBA leaves us kicking, screaming, swearing, or simply just scratching our heads, the fact is that it brings us a uniquely great experience. I mentioned in one of my posts that basketball is fortunate that it, along with baseball, enjoys an almost mythological type of folklore that permeates the game as a whole. Though the NBA is just a very small part of what basketball is, it's consistently managed to offer us a chance to witness truly incredible things done by equally incredible athletes.

Even if they aren't always wearing Silver and Black.