Share All sharing options for: Grading the Position: Center

Let me preface by saying, I think the Spurs only have one true Center on this team. Duncan played a lot at the Center spot this year and in previous years (and played it well), but I am fundamentally opposed to calling him a Center, he is the GOAT PUFF after all. Now all that is left is to see of the three guys we're going to take a look at, who is the real true Center, who is posing and how did they all grade out? 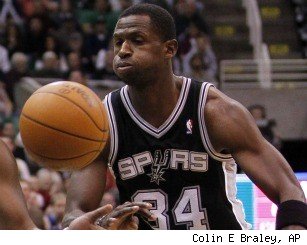 San Antonio McDyess didn't start for the first 2/3rds of the year, but he did have an impact. His most memorable moment of the season being the game winning tip in against the Lakers as the clock expired. Dice had a decent year. He wasn't spectacular, but we didn't expect him to be. He was solid. He hit his jumper for the most part, he hustled on defense and was a calming presence for the 2nd unit until he was the starter after the All-Star break. The only issue with McDyess in the regular season is that it's hard for the Spurs to rest Duncan regularly and having to do that with another big man hurts the depth of the team.

The playoffs were not SAM's best. He was tasked with guarding the Grizzlies best player. He was dogged with fouls the entire series and couldn't ever get his shot going. The refs didn't help Dice out at all. It's hard enough to guard Randolph without the refs giving you a bunch of cheap fouls. That said, McDyess didn't adjust enough to the way the game was being called and his complete lack of offense really hurt the Spurs while he was in the game.

Overall I wouldn't mind having Dice back for another run. I think he needs to be more of a role player and leaned on less for both his defense and offense. I think SAM would be great for short burns in both the regular season and the playoffs, but having him as a key cog in the front court is just not going to work in the long term. Perhaps if he could be the #4 big man that would work. 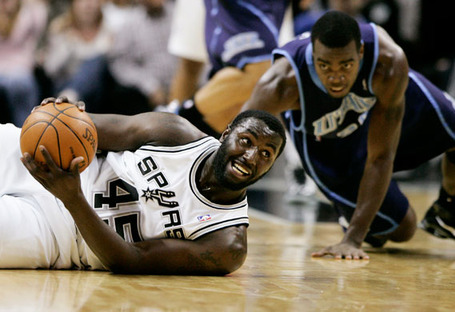 Time to get up and get back to it

Blair started of the season very well, as did most of the Spurs. He ended up losing his starting role around the All-Star break and never really did much after that. There are reports that he balloned to over 300 lbs. and got firmly situated in Pop's doghouse. The only reason he didn't get a lower grade for the regular season is because he started off so well. He was improved in almost every way over last year, but somewhere along the lines he lost focus or confidence or both.

The Playoffs didn't go real well for DeBeast. He was outsized in pretty much every way by Memphis and his production just wasn't there. In fact, Blair got his first "DNP Coaches Decision" of his career. Blair managed to get 22 minutes of playing time in Game 1, grabbing 6 rebounds and scoring 9 points. Then he played just 13 minutes in Game 2, scoring 2 points and get 5 boards. His playing time dropped to 10 minutes in the third game and then he ended up with 6 minutes in Game 4 and didn't play in the last two games. It was a post-season for Blair to forget, to say the least.

I still like Blair. He's got lots of potential, but he's limited. He can't be paired up with a guy like Bonner, not at this point in his career. He needs to be paired with Duncan or Splitter or some other defensive minded big man. DeJuan's got a great contract and has shown that he can be valuable when placed in the right situations. He can also be unfocused and play out of control. I would hope the Spurs can put Blair is situations to succeed by pairing him with the likes of Duncan and Splitter. Of course, a lot of it is up to Blair to show improvement in his focus, his shooting and his overall game. I wouldn't be surprised to see Blair come out and have a really nice year this next season. I hope he realizes that he can't just goof around a be a productive NBA player. 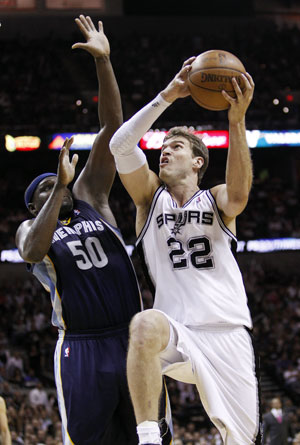 Pop, he really does have game...seriously

Splitter was supposed to come in and really help this team out in the front court. Things got off to a bad start when he got dinged up in training camp and had to sit out the first part of the year. It took him a long time to get into the rotation due to solid play by pretty much everyone in front of him on the depth chart. Add to that the fact that the Spurs simply weren't losing early in the year and the "if it ain't broke don't fix it" montra seemed to doom Splitter to riding the pine. Splitter was able to show case some of his skill as the season progressed. It was clear that he had the footwork and size to do some things, but he wasn't ready to take any sort of full time role. When Duncan went down late in the year, Tiago played really well. He gave a large part of Spursdom the hope that he would see significant playing time come post season.

Splitter may be the only Spur who did better in the playoffs than he did in the regular season. Part of that might be that he didn't get on the floor for the first 3 games. For some unknown reason Pop didn't play Spitter in Games 1, 2 or 3 while the Spurs got handled on the interior. Game 4 saw Tiago come in and get 22 minutes of playing time, racking up rebounds and 10 points. Surely he was going to be a fixture for the rest of the series. Sadly, it was not to be. The Brazilian only got 15 and 14 minutes the last two games. He grabbed 5 boards and scored 10 points in the last two contests, but wasn't the same factor after getting a longer burn in game 4. The most impressive thing about Splitter's playoffs was his lack of stage fright. He played hard on defense and did what he could offensively without trying to do too much.

Tiago is the future at the 5 spot for the Spurs. He's a true center who can play with Duncan or Blair or Bonner and be a force on the inside. He's not to the level that we'd like him to be, but he shows all the talents of a big that will be a factor in this league. He's got the footwork and the mental approach that show lots of room improvement in his overall game. Once he gets used to the NBA and the physicality that goes along with playing in the world's best league, he'll be a force.

I want another big man. I mentioned Landry in the PF post and I like him as a better version of Blair. That said, I would love to see the Spurs acquire another true Center. Somebody that can body up the big boys and protect the rim, while not being completely useless on the offensive end. A guy like Nene or Marc Gasol would be ideal, but they are both pretty unrealistic options for this team. Having looked at the FA list, I'm not sure there's another real option outside of taking a flier on a guy like Aaron Gray

I think we need another Center as well. Even if you put Duncan as a Center, this team is just not physical enough with only two legit defensive big men on the team. Dice is solid, but as I mentioned we can't be relying on him for more than short burns. I don't know if a guy like Ryan Richards can come in and make a difference or if there is somebody in the draft that the Spurs can get, but the FA market does not look overly promising. This team needs help, because the days of Tim Duncan carrying the load is over. He's got to have help inside. 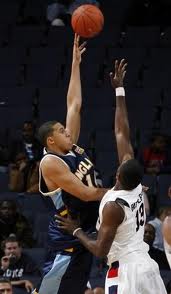 Is this the help?