Share All sharing options for: Grading the Position: Power Forward

We now get to the big boys. There is even less consensus on the front court players amongst Spurs fans than there is in the SF position. The Spurs basically have 6 guys that they intertwine in the Power Forward and Center positions. I am arbitrarily deciding who is a PF and who is a Center. Perhaps there's part of the Spurs issue. Maybe they need to get guys who's roles are clearly defined in the front court. I would argue that all the roles are defined, but not in the PF or C way that fits into a nice little pre-game lineup.

So without further ado, let's go ahead and grade out the Power Forwards. 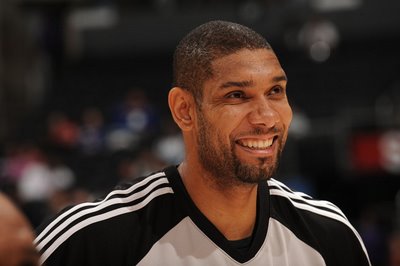 The GOATPUFF. The greatest of all time as his position did what few of that ilk are willing to do. He put his game on the back burner for the betterment of his team. Duncan's numbers were down, yes, but numbers aren't everything. Duncan's the anchor of this team and probably will be until he decides to hang 'em up. The defense was vastly superior when Duncan on the floor. His quick outlet passes helped the offense become one of the most prolific in the NBA. Duncan's injury late in the year was a clear sign that this team is not even close to the same without him.

Unfortunately for Timmeh and the Spurs, they ran into one of the worst match-ups they could have in the playoffs. Tim's interior defense was great, but he couldn't guard two big men by himself. Duncan's offense suffered as side effect of his defensive effort. The lack of consistant offense from Duncan hurt the Spurs ability to stop runs. Duncan did all he could, in my opinion, he just didn't have a ton of help on the interior. Timmeh simply isn't the guy who can carry the team by himself any more.

Duncan is still a huge key to the Spurs success and he will be into the future. I'm not sure how much longer Duncan will want to play, but it's clear that his defensive presence and his BBIQ is an extremely valuable asset to the Spurs. I'd like to see Duncan help the young guys like Splitter and Blair learn how to work hard and win with the right attitude (not that Duncan isn't doing that, but I hope more of it rubs off). Duncan probably has a couple years left of quality play before the wheels come off. I'm not sure he'll play beyond his contract, but as a Spurs fan, I sure hope he gives us another few tours. 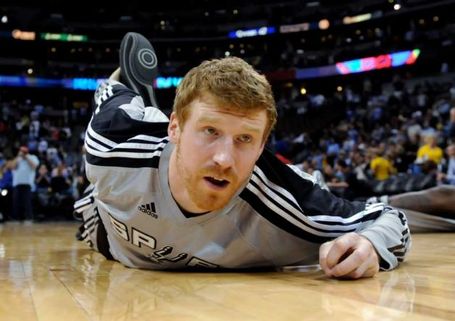 Bonner had a solid regular season. He started off red hot and ended the year with as the best 3-point shooter in the NBA. Bonner's injury in the middle of the year really threw off the Spurs offense. Bonner's ability to space the floor was one a the biggest reasons for the Spurs offensive explosion this year. The Sandwich Man's strength is his 3-point shooting. His weakness is interior defense. You have to give Bon-Bon credit. He hustles and tries, but simply does not have the athletic ability to keep up with most PF's or Center's in the league. A nice season for Bonner overall.

The playoffs have been Bonner's downfall in the past. He had a fairly good Game 1. He hit two clutch 3's and helped the Spurs have a chance to take that game. After that Bonner hit a total of 2 shots from downtown. He didn't give up and still managed to grab a few rebounds, but he was simply out matched with the Grizzlies interior play. Gasol and Randolph were too big and Arthur was too quick. Fact of the matter is, until Bonner gets comfortable shooting with less space the playoffs are going to be a difficult time for the Red Rocket.

Bonner is good for this team. His shooting and hustle are helpful for the offense and he's extremely useful in the regular season. That said, I'm not sure Matt can be a factor in the post season unless there's a good match-up. Bonner's a liability on defense and cannot be allowed to play 20 minutes a game when the opposing team has a vastly superior interior presence. I think Bonner stays on this club and helps them throughout the regular season. If he can step up when needed in the playoffs he's a valuable piece. That said, Pop cannot over play as he's done in the past. 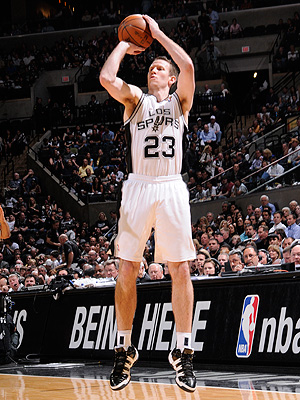 Novak is basically a better shooting, less athletic, smaller version of Bonner. If the Spurs could sub offense for defense every possession I think Novak would have a lot more playing time. Steve had a so-so regular season. He got most of his minutes in garbage time and proceeded to hit more than half of his 3-point attempts. I'm not sure if Novak has a real future with the Spurs, but you never know with Pop and his love of three point spacing. I think Novak is a professional who can help this team as a specialist who can come in and play in specific spots. Other than that I don't see have Novak can stick with this team. I have a feeling he's gone this off season.

The Spurs could use an athletic defensive minded 4. The loss to Memphis highlighted the Spurs lack of defense presence on the interior. Gasol and Randolph abused the Spurs lack of size and athleticism. I'm not sure how the Spurs can improve this position a lot in the off-season, but I think it's clear that help in needed.

I want a guy like Carl Landry. He's athletic, quick and not afraid to stick his nose in on defense. He's also got a pretty good offensive game. His defense isn't the best, but he'd be good against guys like Pau Gasol and Dirk. I'm sure it'd be very difficult to get a guy like that, but hey, it's the "want" portion of the write up.