Writing is hard. I mean really hard. I'm envious of those who can churn out column after column or book after book. Whenever I need or want to write, I find myself just staring at a glowing white screen while an abundance of spurned responsibilities and immediate distractions dance in my peripheral.

I'm told to "write what you know" and I know how to share stories with others, ignorant of whether they care to know them or not. And since I haven't taken you Pounders behind the scenes for a little bit, I thought I'd share some details from Sunday's activities prior to the game against the Phoenix Suns.

One of the many perks of attending the game with media credentials is the variety of people I get to interact with, e.g., Andrew A. McNeill, Jesse Blanchard, Richard Oliver, Tim Griffin, Mike Monroe, etc. New to the list is Wayne Vore (ATS), formally of PtR and now with Spurs Planet. Wayne swung by my seat during the Spurs pre-game practice to introduce himself. If I'm not mistaken, this was Wayne's first home game since December although he moved about like he never left. I could have been more friendly and talkative (my bad, Wayne) but I'm normally very reserved with new people. After awhile, you wish I'd just go away.

With 75 minutes to tip-off coming up on the clock, the media made their way to the halls for the pregame interview with Coach Popovich. While we all waited to be led further down the hall towards Pop's office, a Spurs employee guided a group of [University of] Baylor students (public relations majors) through the media-jammed hallway. Random members of media were introduced and the standard process of the interview-to-come was detailed. Tom James, the Spurs’ director of media services, gave the Baylor group a short set of instructions, including a phrase that was once delivered to me on New Year’s Day. In short, be the ultimate fly on the wall and keep to the back. We eventually made our ways down the hall passing by ESPN's on-site crew of Mike Tirico, Hubie Brown, and Heather Cox. In case any of you are wondering, yes, it does appear as that the only thing holding Hubie Brown together is the suit he has on. In truth though, the old coach does look good for a man getting ready to turn 78 later this year. We all setup our positions once we reached the end of the hall, making sure not to be out of range when Pop emerged from his office/bunker.

As expected, no one goes unnoticed (or unscathed) in the ever-omniscient eyes of one Coach Gregg Popovich. After greeting the packed hallway, Pop turned his attention to the back of the crowd with a playful wave.

After volleying a few initial questions concerning the team’s starting lineup and the condition of Duncan’s ankle with one word responses, normally safe ice-breaking questions by the media, Pop returned his attention to the Baylor students, "The length of the answer reflects the quality of the question."

A few seconds of awkward silence endured before I muttered, "And now we don’t want to ask anything."

Pop could have easily set up and tee-off from that comment but conceded, "I’ll be good now." Coach Pop even granted the Baylor group a chance to ask a question towards the end. Following some tentative laughter, a student did manage a question about the team’s moral during the losing streak and the shrinking lead over the Lakers.

"You have to understand that all of these guys are pros and have been doing this a long time. You expect teams to make runs and there is no reason to spend time worrying about what somebody else is doing. You still have to concentrate on you," Coach Pop said. "Everybody notices that L.A. has kicked butt since the all-star break. But you’re able to compartmentalize - you put that aside and you worry about what your team is doing."

With that, Coach Pop returned to his office to continue game preparation while the herd of media types headed back towards the media room or, like me, straight to breakfast.

After what was probably the most enjoyable meal I have ever had at the AT&T Center, I grabbed my gear and headed towards my seat. I was cut off at the player’s tunnel by a black curtain. The yells and whoops of Spurs players grew louder on the opposite side of the curtain. The game announcer's voice boomed out the introduction and a stampede of sneakers immediately headed out to the court. The curtain whipped back and I could see the group jog out through the spot light flooded tunnel to the cheers of the crowd. I’m certain a Jesus look-a-like coming out just after a squad of giants was a peculiar site but, hey, it sure was thrilling to me.

We’re all aware of how the game went down. The San Antonio Spurs proceeded to go Office Space on the Nash-less Phoenix Suns and vented some serious pent-up frustration. If there was a mercy rule, the Spurs might have enacted it with their game-high 31 point lead. Or as @snavetrebor from Twitter put it, "I guess ABC's ‘playoff push’ is about the Spurs shoving wheelchair bound Suns team down a flight of stairs." 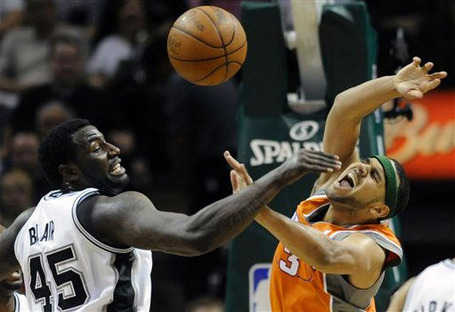 It is my hope and desire to witness quite a few more of these beat downs courtesy of the Spurs. I am not certain if I will have either the opportunity or ability to get this involved with the Spurs again. The way I figure it, with the two remaining regular season home games, I have anywhere from four to eighteen home games left. Regardless, with a new impressive winning streak hopefully getting on its feet, I’m ready to give this team (and this site) all of the effort and energy I can throw at them. I expect a good crowd, Spurs fans.