And there you have it Spurs fans. That's all she wrote. Win or go home, and home is where we are going.

Although it was not the desired outcome, the Spurs still played hard. It's not easy at the moment, but once our heads clear, there still is a lot to be appreciative about after some time for grieving. If you are up to it, follow me after the jump...

REM Everybody Hurts (via sheyemmy) - the song just felt so right the moment the game ended.

First let me start with saying this. A part of me is happy for the Grizz. They were an expansion team and both Vancouver and Toronto weren't doing too well as the years went by. Then Grizz move and they had the Hubie/Pau Gasol/Battier era which was a great feel good story. That fell apart fairly quick once he coach Brown left, and Grizz fell back into their old form, albeit with better talent (led by Pau Gasol rather than Big Country Reeves).

Second of all, I want to thank McDyess for his solid 2 years of play (who will likely retire now). I wish he could have been around 2 years sooner, but he has played like a Spur and I wish could have gone out a little bit better than this. His defense was as good as it could get. He was consistent and solid throughout the year. It would have been great to see Dyess with a ring since the Spurs stopped him from almost getting one. He was so close in that Det-SA series. I'm happy that the Spurs won, but sad to see him not get a chance to get back there.

We can all ask questions and point fingers, but we have to give the Grizz a lot of credit here. They consistently played great on both ends of the floor. They had guys stepping (Battier, Arthur, Young, Mayo Vazquez) up in each game to help their stars out, they hit all the key shots, and more importantly their defense was stellar, led by two guys, Tony Allen and Shane Battier. They are just defensive monsters on the perimeter, something the Spurs could use a little bit of. *Cough* Shane is a free agent this summer. 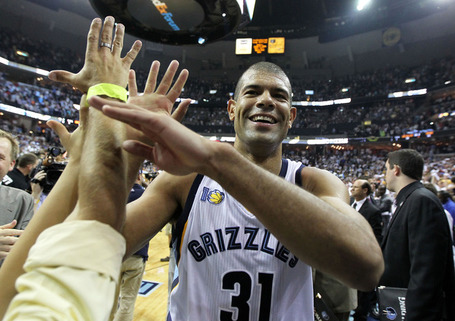 Ultimately, it came down to that one guy when the game was on the line, Zach Randolph, who had arguably the best games of his career. Although not pretty, Zach's dominance reminded me of Duncan in his prime tormenting the Lakers, Nets, Mavericks and Phoenix Suns in the post.

We as fans are now experiencing the other side of being tormented by players. It's sad, but it makes you realize what Duncan and the rest of the big three did in their past years. 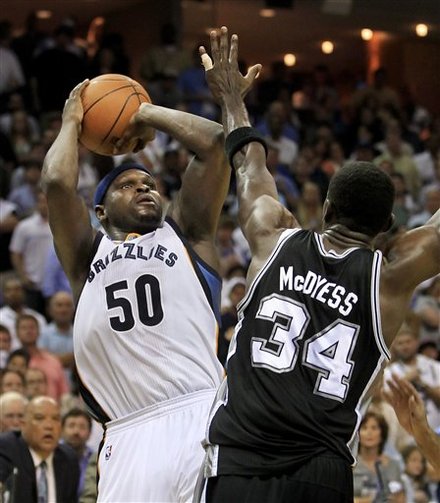 Memphis Grizzlies forward Zach Randolph(notes) (50) shoots against San Antonio Spurs forward Antonio McDyess(notes) (34) during the second half of Game 6 of a first-round NBA basketball series on Friday, April 29, 2011, in Memphis, Tenn. Randolph led the Grizzlies with 31 points as they won 99-91 to win the series 4-2.

So what went wrong? Lots of things, which will be focused on by some of the most passionate fans in this community and elsewhere. Health, luck (good for Grizz, bad for Spurs), shooting slumps, execution, matchups, you name it... 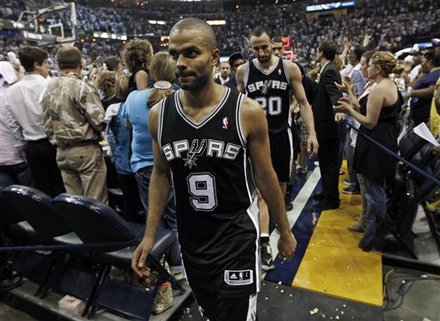 The series just had a bad feel to it when makeable shots for the Spurs didn't go in (like they had in many past series), but went in for the Grizz. If you subtract game 4, all the games were close and ended in the last few minutes. The numbers won't look pretty, and they shouldn't since it was a tough series. There were good moments and there were bad moments.

No Spur really had a good series, but there were pockets of good from an assortment of players. Unfortunately the good was spread out among games and never was really going on at the same time for enough players in a single game. It was a gritty series to say the least.

The one thing as a fan that I can be proud of is that the Spurs never gave up. They kept pounding at the rock. They never made excuses and kept pushing, producing arguably one of the great playoff games (that took 10 years off my heart) I'll ever see in my lifetime.

Tony Parker - Did not play up to expectations in the earlier games, but definitely came on to finish the series. He definitely picked up his game and helped keep the Spurs fighting. He was stellar in the Game 5 OT game helping to close that game out after Neal's amazing shot.

Antonio McDyess - Never put up stellar numbers and could have hit a few more jumpers but he worked his butt off every minute he played. He was called for some crappy ticky tack fouls, especially earlier on in the series, but kept making Randolph work for every difficult amazing shot he made. ZBo probably doesn't make that 3 if McDyess never leaves the game.

Manu Ginobili - Once again injured in the post season which of course slowed him down to some degree and also prevented him from playing in game 1. He was a big culprit in the execution breakdowns along with Parker. He and Parker played great in game 5 and his energy in Game 2 was amazing. The one problem is Manu is not as young as he used to be. Allen played him well and made him work. Even though his offense wasn't consistent as it once was, his heart and desire is always top notch.

The years of the Tim Duncan era are approaching an end. Many questions go into another summer (including a possible lockout, but I'm going to be optimistic here). However, until Duncan and Manu retire, and as long as the Spurs can find guys and improve around the core, you always have to feel good about chances, even though they are slimmer than they were 3-4 years ago.

Improvements from some of these guys mentioned above, plus some tweaks made by the coaching staff and a roster move here or there can help strengthen the team further. The end result isn't what I wanted, but it is still something that the team can build on while transitioning from the Duncan/Manu led years.

I think the Spurs will have another solid year and just maybe they'll exceed our expectations next year. Anything is possible and I'm excited to spend it with you guys next year. And thank you to all the enthusiastic fans that constantly visit the community and provide excellent commentary and insight. It makes me want to come back even when games don't go the way they do or when life in general isn't always on the great side. I know I can always depend on this place for being welcoming and full of insight.

And once again, thank you Antonio McDyess. We will definitely miss you if you do retire. :(