Hope. Neal gave the Spurs hope. 5 minutes of it. Parker and company gave us all 48 minutes more hope after overtime on Wednesday. Can the team from the Alamo City keep the hope alive? The Spurs have the talent to win. They can dominate at times, but it's clear that this Memphis team is not intimidated and will not be going away because we wish it so. As a Spurs fan, all we want is another chance to hope, to believe, to cheer and to enjoy our team.

After San Antonio staved off elimination in Game 5, they will face a much tougher task in Memphis. Beating the Grizzlies in South Texas is a little different than winning in Western Tennessee. The crowd will be in it, the refs will not be calling things your way and their role players are going to play better. This will not be a walk in the park, but the Spurs have the chance to plant the seed of doubt in heads of the Grizz.

If they Spurs do not shrink, if they play with the level of focus and intensity we all know they are capable of they might just put that shadow of doubt in the back of Memphis' mind. I have a feeling that even if the Spurs come out strong the Grizzlies will not back down at home. It's going to be a fight and I'm happy that we've got our guys on our side.

Jordan did such a good job with the last preview I'm going to steal his ideas.

PG: Parker played very well in Game 5. Conley couldn't miss in the first half, but he tailed off in the 2nd half. I see this as a very important match up. Whoever is more agressive helps their team more.

SG: Manu came out and went off on the Grizz in Game 5. Allen was a non-factor. I look for Manu to continue his stellar play and Allen to bounce back.

SF: Rage is not having a great series. He did make some good plays late in Game 5 including a clutch rebound late in the game. Princess Peanut needs to play better defense on Young and Battier.

PF: Antonio didn't shut down Randolph, but he did make his life very difficult late in the game overtime. More stellar defense would be nice. Dice has had a rough series, it'd be nice to see him have a solid game. Randolph is going to get his, hopefully Dice and Co. can limit him.

C: Timmeh came out gangbusters in Game 5, but was soon forgotten. I'd like to see more dump downs when Memphis makes their run. Gasol has been effective, let's see if the Spurs can get him in foul trouble.

. His size has helped the defense and on offense he's causing trouble for Memphis. Matt Bonner looked good early, but faded late in Game 5. George Hill was really good in the 2nd half of Game 5. Let's hope Cubits can put a solid 48 minutes. Battier, Arthur and Mayo will most assuredly have better games at home.

Pass. Hollins has been really good. See the 3rd quarter of Game 5. Pop has been so-so. He finally got Splitter in the game and drew up and nice play for Neal. I guess tonight may decide who's got the edge.

They've won more than we have 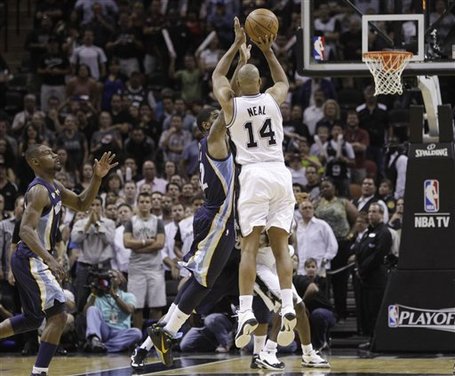