The ball sailed from Gary Neal’s hands en route towards the basket. This was it – the big shot in the final seconds of the game. The final attempt was his by design. Faith to save the team had been placed in the hands of an undrafted rookie. This was Gary’s chance to save his team from falling off the brink into the pit of defeat, an opportunity to be the hero, and the chance to make a name for himself. The ball dropped through the net – the last second three-point basket was good. Gary’s teammates ran onto the court yelling, jumping, and hugging the sharpshooter from Towson.

The San Antonio Spurs had just defeated the Los Angeles Clippers in Mexico City, 100 to 99.

It feels like eons have passed since the spotlight heroics by a NBA summer league sensation snared victory on October 12th, 2010. Since then the Spurs have rolled out an incredible season of highlights with the rise of Gary Neal as one of the many enlightening stories. Down 97-94 to the Memphis Grizzlies with 1.7 seconds remaining in last night’s game, the San Antonio Spurs once again confidently turned to the rookie. This was a far cry from the neutral foreign crowd in a meaningless NBA exhibition game. The Spurs needed a big shot to stave off elimination game in a lopsided 3-1 playoff series. His teammates on the court were seasoned veterans and future hall of famers, not players fighting for a roster spot. This was a moment that could forever define him and even possibly scar him in the eyes of Spurs fans. Forget the spotlight moment in Mexico City; Gary Neal was now standing on the sun.

With all the pieces set, Neal blitzed from the far corner and off a Tim Duncan screen to the top of the key to catch the inbounds pass from Manu Ginobili. Neal took one dribble to his right away from a scrambling O.J. Mayo, set his feet, and let fly a leaning 24-foot three-point shot. 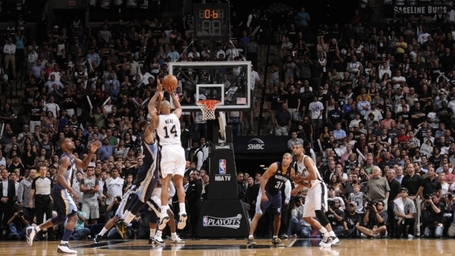 It was one of those moments that seem frozen in time. You swear you could have counted the bumps on the ball or calculated its angular velocity. It was one of those moments where the only the audible sound was the unified gasping of 18,500-plus attendees – the windup before the roaring punch. Not even the ever-menacing final buzzer was noticed when it sounded off at the top of ball’s arcing path. All of the entranced souls were fixated on the spinning orange orb as it glided through the air and mercifully through the rim.

The already standing crowd erupted into an incredible frenzy; fans jumped on one another hugging and screaming. People charged up and down the stairs with hands up and out, slapping palms with everyone who could reach. Someone’s reaction at my table made a nearby TV bounce up and nearly off the side. Outside of yelling, I am unable to detail how I reacted. Most likely it was a volatile mix of random physical movements. Remove the game and it probably looked like I was having a seizure. After a wild final minute which witnessed a contested reverse layup by George Hill off a fastbreak, a desperate Manu Ginobili leaning corner jumper, and clutch points from Zach Randolph, I’d say most Spurs fans watching worldwide were likely foaming at the mouth. Gary Neal's reaction after sinking the basket to send the game into overtime? A small fist pump. The rest of the Spurs however, led by a sprinting Richard Jefferson, mobbed Neal with hugs and head slaps at midcourt. I was worried that Gary would receive another concussion from all of the commotion.

Riding the momentum of the last minute, the San Antonio Spurs proceeded to close out the tough Memphis team. The crowd grew even more deafening after each Spurs basket and free throw make. By game’s end, I could barely hear Paul Garcia from Project Spurs who was sitting to my immediate left. The thundering screams and cheers sat ringing in my ears for several minutes after the game. So much so that I didn’t hear Coach Popovich enter through a noisy metal door for the post-game interview. Prior to the post-game interviews, I passed Gary Neal as he headed back out onto the court to do the impact player of the game interview with Bill Schoening. I handed my compliments to Neal right before the crowd applause re-ignited for the last second hero. It was a wonderful sound. 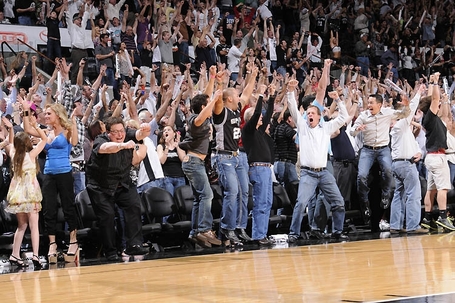 Gary Neal's road to this point has been long and very well documented. Like most of the important role players on past Spurs teams, Gary has had to earn every ounce of faith from his teammates. It started with the game winner in Mexico and blossomed over a long hard fought 82-game season. Coach Popovich, and more importantly, the Spurs players believe in Gary Neal. The Spurs are willing to turn to Neal, even in the most dire times. "It’s kind of a great feeling. Coach Pop draws the play up and you see you’re going to get the shot and nobody looks around and questions it or anything like that," Neal said. "It was great walking out of the huddle and your teammates are happy with you getting the shot, expecting you to make it."

I can’t tell you how game six on Friday will go down. I’m not even sure what other piece of information or data analysis there is that hasn’t been flipped over, run over, dissected, or regurgitated a hundred times. What else is there to know? Maybe the Spurs will need another last second Gary Neal jumper, maybe not. Maybe the giant has awoken and Memphis is in for some serious pain. Or maybe it all comes crashing down. I just don’t know. All I know is that the Memphis Grizzlies are a beast of a team – terminators even. They can't be bargained with. They can't be reasoned with. They do not feel pity, or remorse, or fear. And they absolutely will not stop, ever, until that clock reaches all zeroes. Gary Neal, Manu Ginobili, Tim Duncan, and the rest of the San Antonio Spurs showed that same killer mentality last night. The top seeded Spurs will need every ounce of that ferocity at the FedEx Forum in Memphis, an arena they have not been victorious in since March 6th, 2010.