The Playoffs are just different. These are not moments for the weak of heart....or stomach. It is a time when as fans live and die with every shot. So far, us Spurs fans have been dying...a lot. The Spurs have been held down in this series by a surprisingly good Memphis team. They have been out hustled, out shot and out executed. The Spurs needed to turn in a strong performance and they needed to show heart or their stellar regular season would mean bupkis. As LatinD stated here the Spurs would need to turn to their stars and that's just what they did.

As this game started, it was clear that the Spurs were not going to go quietly. Tim Duncan started out with 11 points in the first quarter. He looked like the Duncan of old. He came out and carried the Spurs. Tony Parker and Manu Ginobili were agressive and hitting shots. Even Richard Jefferson got into the act knocking in an early three pointer. The Spurs defense looked really good as the first quarter ended 20-14 with the Spurs leading.

I love this band and song

The good times just kept rolling as the Spurs built of a 16 point lead in the second quarter. Matt Bonner showed some of that shooting ability he's been said to have. Tiago Splitter came in and played extremely well. The Spurs were ROLLING! Then the Grizzlies hit a couple shots here and there and the Spurs turned the ball over or had some bad offense. Memphis started chipping away. However, it seemed unlike it previous games since the Spurs would respond as they pushed the lead back to 10 at half time.

As the third quarter began, I was feeling great. Manu came out and knocked down a shot and extended the lead. Then something happened. Not at once or even quickly. The Spurs started missing....almost everything. The Grizzlies defense improved and they started hitting most of their shots. The Spurs looked like they knew what was happening about mid-way through the quarter. It was the dreaded Third Quarter Collapse. It was ugly. Memphis shot 67% in the 3rd quarter and the Spurs only got 15 points. At the end of the quarter the Spurs were down 3 and lucky it was that close. 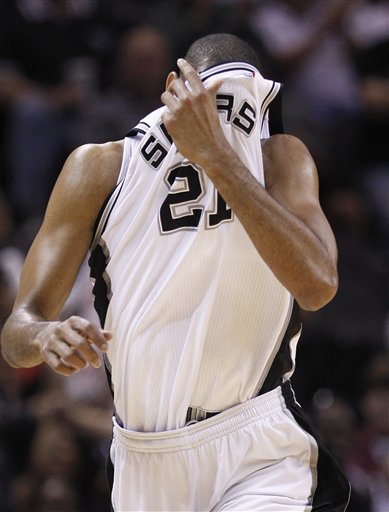 It was a bad TQC and Timmeh didn't want to watch

The (potential) final quarter of the year and San Antonio did not look good. Memphis kept the Spurs at bay all quarter. The lead was held by the Grizzlies for almost the entire quarter. The Spurs would tie the game, but then have two straight turnovers leading to easy points for the Grizzlies. Time was running down and the Spurs were down 3. It seemed the season would end with a measly whimper.

That is, until Manu got the ball off of a broken in-bounds play, spun to the corner and hit a crazy fade away over the outstretched arm of Pau Gasol. Tie game! Bat Manu strikes again. The Sickness saves the season! Wait...what? His toe was on the line? It was. By { } that much. Spurs down one and to his credit Zach Randolph hits his free throws pushing the lead to 3.

In steps the unlikely hero. Catching the inbound pass and taking one dribble to his right, Gary Neal raised up and nailed the long three as time expired. The Spurs would get at least 5 more minutes of the 2010-2011 season.

In overtime Tony Parker picked up his game. He hit his jumpers and helped extend the Spurs run. The Spurs defense stepped it up even further. Then it was up to George Hill, Parker and Manu to hit their free throws for the Spurs to win Game 5. They did.

This Memphis team has earned my respect. They are gritty and solid. Hollins is a very good coach and it shows. When his team was down at half time and they came out and play that well that shows good coaching. Randolph is clutch and his team believes in him. Mike Conley is much better than I ever thought he was and Sam Young has made us Spurs fans envious. 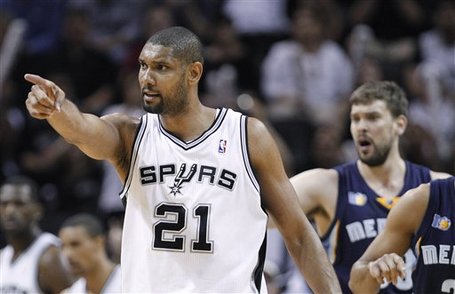 I think he's pointing at you Graydon.

That all said, this Spurs team is one that I love. They got the solid performances they needed. They showed heart. They did not accept the "Gentlemen's Sweep" offered to them by Memphis. This team was not interested in passing Memphis any kind of torch. Instead they said "screw it" and played through an awful 3rd quarter and fought back to get this game to overtime. They did not have their best night shooting (31% from three), they did not win the rebound battle, but they played some great defense down the stretch and most importantly they won the game in overtime.

Gary "Nail Gun" Neal showed the poise that we've come to love. Tony Parker showed why he's one of the best PG's going. Manu was Manu. He was awesome. Hill shook off a forgettable first half played very well in the 2nd half and OT. Splitter showed he belongs on the floor. Duncan didn't get much after the 1st quarter, but he didn't quit. He could be seen hustling up and down the floor. Antonio McDyess didn't do much besides shut down Randolph late in the game and in overtime. The effort and heart was there. Oh, and he also got the key tip that sent the ball to Manu for the three-that-was-a-two. (Of course he also had the bad pass that made the tip necessary, but that's another story.) The things we love about this team shined through tonight and they live to play another day. 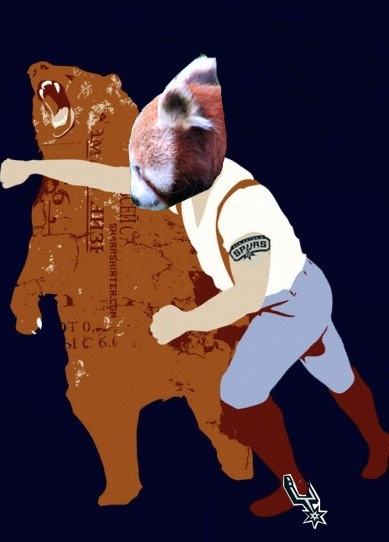 Thanks to GrantE for the nice work