Got Those Low-Down Memphis Blues

Just a little photo essay about the how the Spurs had to run a gauntlet of Grizzlies' fans at the Westin hotel in Memphis. The Westin is located just across the street, one block away, from the front entrance to the FedEx Forum, but the team takes charter buses to the players' entrance at the arena. This is to avoid the crowds of autograph seekers that would surely develop if they took the one-block walk.

As the buses pulled up around 3:30, a crowd of 40 or so began to gather outside the entrance. By 4:00, this would grow to well over 100, almost all wearing Grizzlies shirts, and crowding all areas of the sidewalk outside the hotel. These people were fierce! They weren't there necessarily to get autographs, but to unleash a little venom on the Spurs. I photographed the scene from my 3rd floor window of the hotel. 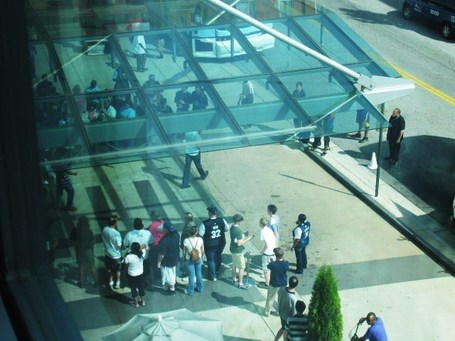 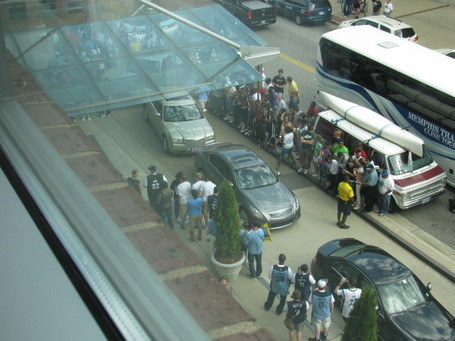 Each Spurs' player was accompanied to the bus by the team's NBA security man. As each emerged, usually one at a time, from the hotel, the crowd would boo loudly. Here Timmy takes the walk, carrying a small bag with his uniform in it. He received the loudest reaction from the crowd, although at the game, that distinction would be reserved for Manu. 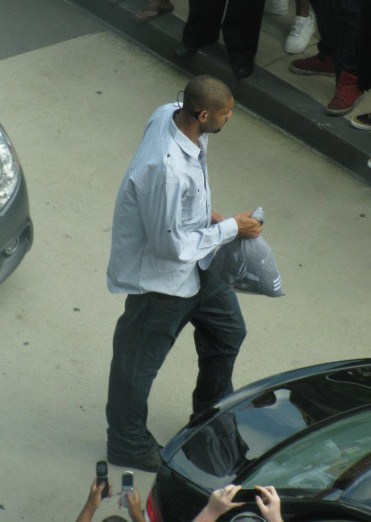 "Sparkles" made the walk, but did not draw much reaction. I include the photo for all you lovers of Tiago . . . yes, he is still a part of the team! Compounding the security problem were the many vehicles arriving with guests who were checking in to the hotel. Two policemen were called in to help. Apparently this hotel has no "freight" or back entrance, but I doubt that would have made much difference as people can find those entrances, too (I witnessed this happening in Houston at the Four Seasons). 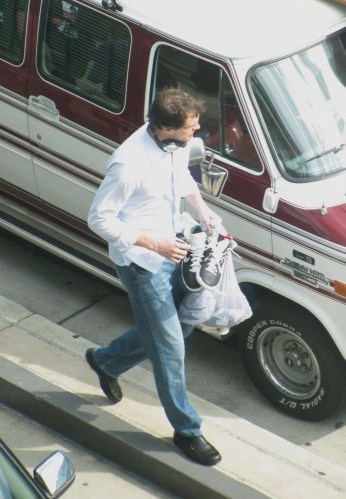 Chris Quinn and Steve Novak drew almost no reaction from the crowd. Earlier, I had watched Gary Neal and Danny Green walk to the arena with Coach Engelland. The crowd had no clue who they were - apparently they left early to put in a little extra work on their shots with Engelland. 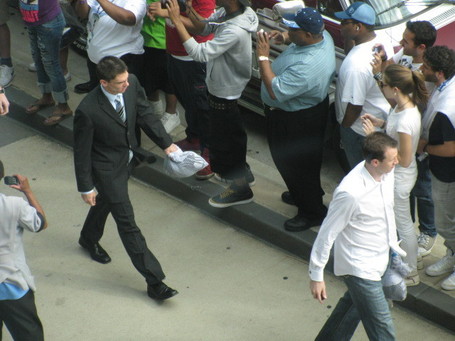 Trainer Will Sevening had a cartload to take to the arena. I'm sure he keeps his gear on hand at the hotel to treat the players there as well as at the arena. 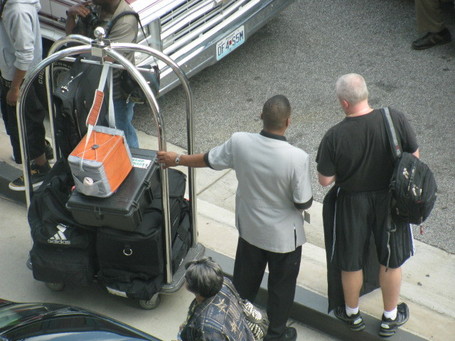 Tony, Manu and Antonio were among the three players who caught the late bus to the arena. Why two buses? The guys don't all do shootaround at the same time - usually two or three at a time run through various drills with the assistant coaches and the floor would just be too crowded if they all worked out at the same time. Each player's drills last around 15 - 20 minutes.

Tony, seen here trailed by the NBA security guy, was the only Spur to give an autograph, and then only to two teenaged guys. Manu high-fived a group of youth basketballers who had on their team jerseys. By the time Antonio emerged as the last Spur out of the hotel, most of the crowd had gone on its way. 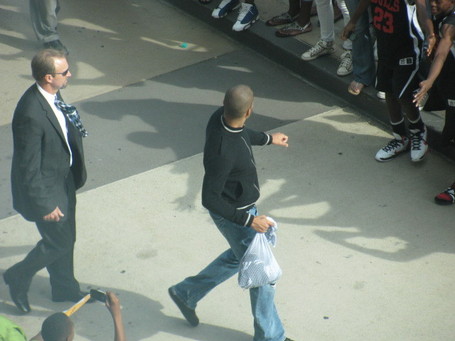 I asked Spurs' media guy Tom James if this type of scene was normal when the team is on the road. He said there is usually a small crowd of mostly autograph seekers, but nothing like this large crowd that was having a sort of pre-game haters' pep rally.

What follows is a side story of the efforts on one "professional" autograph seeker to stalk his prey. By professional, I mean the sort who gets the autographs with the intent of selling them later. You can spot these guys a mile away - portfolio or notebook in hand, ready to pull out the appropriate photo to be signed. This fellow started out on the curb near the first bus, setting himself apart from the rest of the crowd hanging around the hotel entrance. He quickly moved in to make the bus driver his "new best friend." He'd set himself up all alone as the players would slow down to step on the bus. 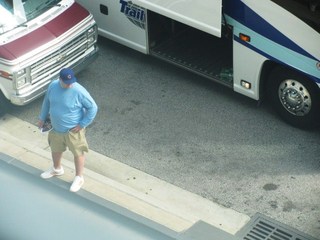 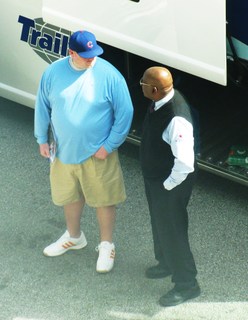 He approached DeJuan Blair, the first player to get on the bus, but was ignored. NBA security confronted him, and I could see him point to the bus driver as if to say "I'm with him." Security wasn't buying it and he was told to move away from the bus. He didn't go far, however, creeping back closer to the bus anytime the security guard went back into the hotel. I talked with the security guard after the game at the hotel and he affirmed what I had seen. 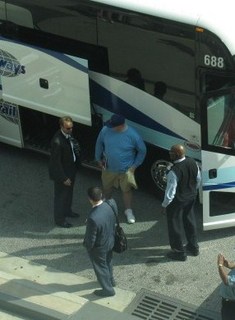 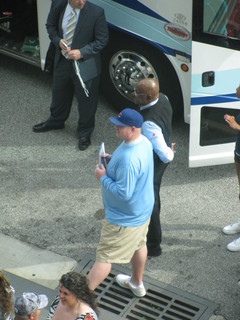 Did he get any autographs? None, Nada, Not a One! Next time, dude, wear a Spurs shirt and bring a little kid with you if you want a Spur to sign anything, and even then, good luck! He gave up soon after the first bus departed and sat under an umbrella on the patio. The last I saw of him he was heading across the street to join the crowd of Grizzly fans outside the arena for a pep rally. 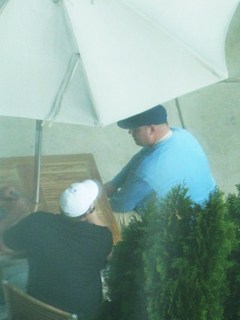