Share All sharing options for: Game 3 Recap: Spurs 88, Grizzlies 91 - The Man in the Mirror 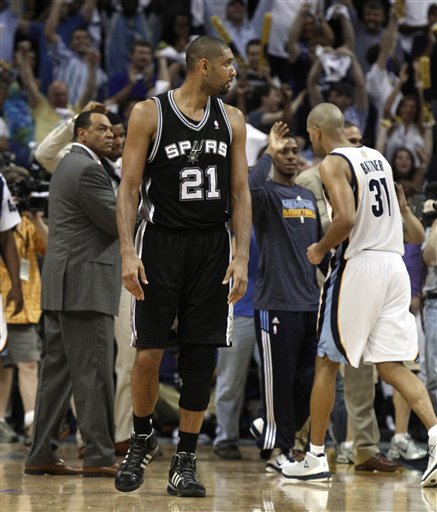 Staring into space, looking for answers in the stars.

Playing its cinderella/underdog/upset-happy role to the hilt, the Memphis Grizzlies handed the San Antonio Spurs another narrow playoff loss, 91-88, to go ahead 2 games-to-1 in this 1 vs. 8 first round series. The game featured a big run by Memphis spanning the first and second quarters that allowed the home team to grab leads of as high as 15 points, before the Spurs slowly chipped away, managing to pull even in the fourth quarter in what has so far been a very tight three games. A surprise three-point basket by Zach Randolph in the final minute sealed the Spurs' fate, as Z-Bo punctuated his 25-point night in dramatic fashion.

The pressure has gone up a thousand notches, Spurs fans, and the thermometer doesn't seem like it has reached its maximum level yet. Some attempt at insight despite the loss, when you do the jump ball. 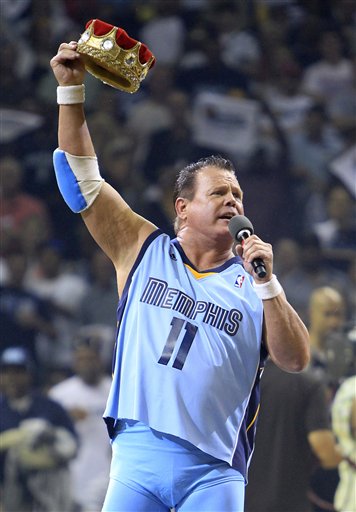 As The King might have it, welcome to the WWE-style NBA Playoffs!

Barely A Recap of The Game

I won't break it gently to you, the San Antonio Spurs deserved to lose this game. To put it another way, the team had absolutely no business winning this one, and the Grizzlies winning on an improbable three-pointer made by probably the last person on earth you'd think who would make that shot in dire straits, is the right ending to another back-and-forth, break-me-shake-me, ground-and-pound playoff game. If you look at the stats, again the Spurs seemed better on majority of the categories, even limiting Zach to only five rebounds and outrebounding Memphis by 11! That would've been the ball game right there but somehow, some way the Grizzlies are able to find the means to gut Ws out.

The game started with a thick haze looming large over a raucous FedEx Forum, a product of all those fireworks that pumped up an already frenzied crowd. You could've argued that smoke got into the eyes of the Spurs players as the sloppy play in the first half would have warranted a week's worth of game tape review sessions. A microphone'd Coach Pop didn't mince words nor feign his usual disinterested game face, sensing immediately that his boys were jittery. How many times would you get to hear a future Hall of Fame coach tell the number one seed in the West that "it's just a basketball game?"

Alas, the Spurs would pay no heed to the man, despite numerous protestations for them, in TD-to-CP3 fashion, to CALM THE F**K DOWN. For these first three games, I feel like I haven't really seen the real Spurs yet. Where have they gone off to, and why at such a critical time when top seeds in other brackets are soaring, their confidence building game-by-game as if these first round encounters were the skip-rope, speed bag and mitts practices in preparation for the big fights? The Spurs knew that they were getting into a sparring session, sure that this would be rough sailing, certain to have more bruises than the usual playoff bangin', yet are slowly losing sense of what have made them so successful in the first place.

The forced runners and fadeaways in the lane. The degenerating offense that has often times resembled a one-on-one clinic, with intensified lessons on "how to miss passing the ball to a wide open teammate." What used to be the 1-on-1, 2-on-1, heck, Tony-on-three fastbreaks that almost always ended up with a Spurs bucket, were reduced to turnovers, missed layups, and a general discombobulation as to whether the Grizzlies are playing in Memphis, Tennessee or are still stuck in Vancouver, Canada. Hell, might as well ask, is this even basketball or is it hockey?

It's not even inception and more like deception, at this point in the series. San Antonio is supposed to be the better and more experienced team, but don't you get the feeling that the it has to work so damn hard for every single point, while we watch Memphis dump it into the low block, throw it up and get easy twos? It's not luck, guys, as much as it is by brilliantly obvious design. Anytime you have two skilled behemoths down low, and up against a team whose gross undersized-ness has never been more noticeable than the past week, you pound it inside until somebody comes up to the ring and throws in the towel, while you hear the words "no mas" as if it were shades of Sugar Ray Leonard beating the crap out of Roberto Duran.

Luckily for us, Pop hasn't given up yet. It's too soon. Or actually... too late? 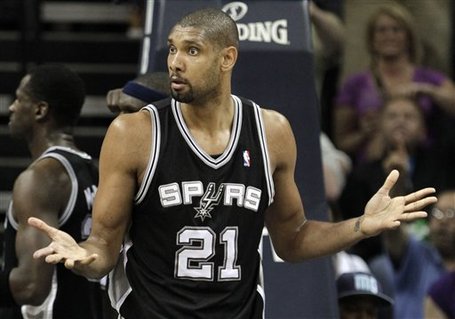 What happened to the last-second timeout to draw up the game winning play, Timmy? We don't know either.

Being On The Bad Side of History

The Spurs rotation is in too deep with the glaring lack of height, and it's looking more and more that this is what will stick. Sorry if I can't help talking about this right now, again. What's probably a pointless obsession by fans to see Splitter's size used in a series begging for bigger bodies is also the one thing that fuels a cacophony of what-ifs, which will only go away when the team can finally vanquish the Grizzlies. However, with the way things are looking, we're still far from that possibility so expect more Free Tiago talk.

I can understand where Pop wants to go with this. It's obviously the rotation that has brought the team much success and was forged by the heat of 61 regular season victories. Also, you need not look further than the biggest playoff upset of them all, the 2007 Mavericks-Warriors encounter, to see why Coach Popovich is keeping his calm and continues to show faith in his wards. That series started off at the wrong foot, with Coach Avery Johnson opting to match up with Golden State's speed and small ball demons, instead of sticking to his regular lineup. How often do you see Number 1 making massive adjustments for Number 8, instead of the other way around? Um... almost never? As we all know, that change resulted in a complete disaster.

Pop doesn't want Memphis to dictate how this series will be played, and step one in doing that is to not alter your lineups by drastically cutting Blair and/or Bonner's minutes all of a sudden in favor of what is essentially your untested, 12th roster guy in Tiago Splitter. If he had gone to this tactic right away, then Lionel Hollins would've already won the psychological war on the sidelines. It might be a crazy proposition, but when you think about it, Avery Johnson let Don Nelson get into the Mavericks' heads by opting to run with Nellie and his Run TMZs, ABCs or XYZs. Of course, this isn't the only reason why the Mavs lost, but it was the bell that set off an avalanche of emergency alarms with that Dallas team.

But when is enough going to be enough? The Spurs' trademark menacing black and silver has become black and blue from all the physical pounding. Seeing DeJuan Blair, all 6'7" and no ACLs of him, measure up to the hulking 7-1 Marc Gasol isn't something you see everyday -- it's both comical and depressing that those moments even happened. You simply don't play that kind of crazy height disparity in professional leagues, much less the glorious National Basketball Association. Except maybe if your undersized forward/center is guarding Shawn Bradley, in which case anything goes. Watching Z-Bo and Baby Pau flex their muscles down low over and over and over again was exasperating, what else if we were down there having to deal with all that XXXL size?

Is it time to shake things up, or as mentioned, we're already too committed to this bizarre marriage between floor-spreading red heads and vertically-challenged energy players? At this point, I feel it's not about "staying close every game so we get a chance to win." NO. We don't dare mess with chances, we're the effing NUMBER ONE SEED, for Easter bunny's sake. We should be the ones dictating this series, not the one being dictated upon as things have gone in the last few games. If Tiago's not going to magically appear carrying the Rosetta Stone or the Mirror of Erised or Green Lantern's ring, then forget about him. The Grizzlies should be the one chasing the Spurs and not us waiting for them to walk it up the floor so they can beat us to death with half-court sets and massive backsides. 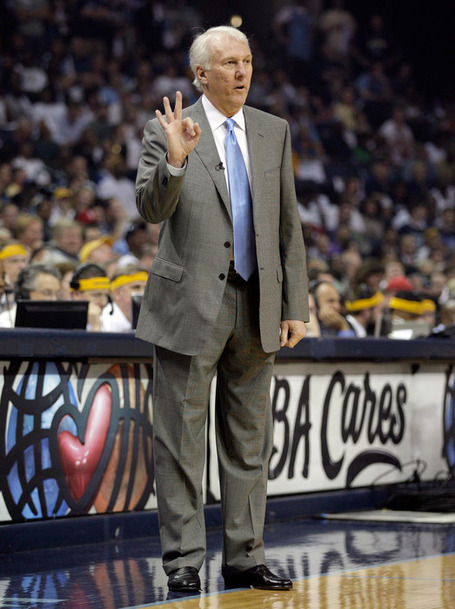 In the end, maybe I just want Pop to tell me that everything's gonna be okay.

I have a confession to make. The more I watch Memphis, the more my respect for that them increases. Don't hate me if I say that there were times when they looked like, no, they seemed like the Spurs of old.

The Twin Towers combination. The creative low-post monster and rebound hound paired with the rare, solid center willing to do the dirty work and cede the spotlight. The point guard with an erratic jumper but terrific finishing ability around the rim. The lockdown defenders who are dead-eye from the corners. The grind it out method of basketball, putting off cutters and shooters with slight but purposeful bumps and nudges, being physical with the opponent until they wear down in the clutch and unable to make a shot because their bodies ache all over. The corner three as a means to douse fiery rallies, and send daggers down the opponents' self-styled grave.

It's all very familiar. Too familiar, in fact.

It's the game that was usually played by past Spurs squads, and now, it looks like the trick is on them. It's ironic, but somehow it also feels -- and there's this word again --- right. Only by facing its past self will this ultra modern Spurs be able to move forward and say that what it has, as currently constructed, is effective to beat the old version, and most likely be good enough to win title number five. The Spurs need to look at themselves in the mirror and be able to say convincingly that "we were exactly like that back then, but this is us today, and right now, we believe in this. We believe in 'us' more than what our past has accomplished."

If drama is to your liking, then consider it as a need to accept realities, die a little inside in order to experience rebirth, and only then will you be able to move forward. The Spurs aren't going to survive these rough-and-tough games, because let's face it, the team isn't built for that anymore. Sure they can bang once in awhile, but in order to be golden, they need more moments of effectiveness from the role players, the outside shooters, and in patiently executing their plays.

I thought only these mirror image battles happened in video games, with the protagonist confounded by his doppleganger's utter disregard for blatant mimickry. Now?

As internet memes go, shit just got real. And if we can't beat two prolific big men while still in the first round using our new formula, then we probably don't deserve to face a much bigger and better version of those two, after all.