Round 1, Game 3 Preview: The BatManu is Back

Share All sharing options for: Round 1, Game 3 Preview: The BatManu is Back

Much has been made of Manu's "robot" arm. In fact, DocFunk and transgo got into the act with this gem: 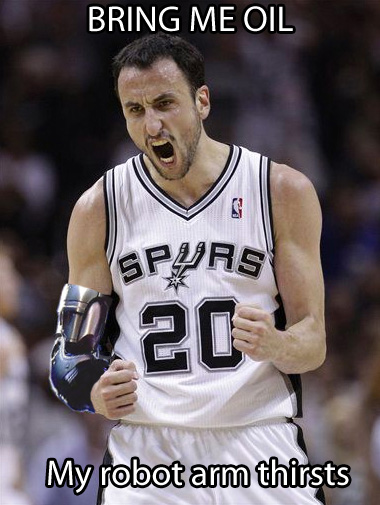 I have a slightly different theory - I think his arm is now bionic and the only reason Manu was wearing the bulky brace was to cover the still growing skin. But maybe that's just me. Of course, the minute my brain hears "bionic", it immediately goes to those iconic 1970s TV shows: The Six Million Dollar Man and The Bionic Woman. Now if we could just get those sound effects every time Manu shoots the ball.

Now onto the preview:

PG: Parker needs to dominate Fisher Conley. Conley has done a good job staying in front of Parker in the first two games. Tony needs to regain his shooting touch, while continuing to drive and dish.

SG: Manu played like a maniac, throwing himself around like a rag doll. Despite Allen's physical defense, Ginobili got the better of the matchup of crazy men. Two more days of rest should help Manu regain his shooting touch - or at least give the Spurs' trainers some more time to tweak his bionic arm.

SF: Rage has become RJ 3.0 in the playoffs. His rebounding has been aggressive and his help defense has been stellar. In fact, the Spurs should give Jefferson some more touches on offense.

PF: The Spurs doubled down on the post in Game 2 and prevented Randolph from repeating his Game 1 performance. Randolph is still a beast down low. McDyess (and Blair) will need to body Z-Bo and try to limit his effectiveness.

C: Gasol came back down to earth in Game 2 on the offensive end. The GOATPUFF had another double-double. Timmeh on two days of rest should be ready to go, but the Spurs can't afford to have him foul out again (or have as many turnovers).

Neither bench had great numbers last game, although George had ice water in his veins down the stretch. We need Bonner and Neal to hit some outside shots to open up the lane for Tony, Manu and Hill.

So far Hollins has done a good job, but I'm betting that Pop has used the last few days to come up with some new schemes.

Memphis has the confidence of having won one of the first two games and of being at home.

The BatManu is back. Any questions?

The Spurs dig into their vast bag of playoff knowledge to pull out a close one.

Turnovers - Both Timmeh and Manu had 5 turnovers - the team had 18 as a whole. That's way too many and led to 13 fast break points by the Grizz. Take care of the balls, guys.

Post Defense - It's imperative that the Spurs continue packing the paint.

48 Minutes of Hell - Still the best Spurs analysis out there, with a brand spanking new format.

Project Spurs - This is another fun bunch. Be sure to check out their podcasts.