With game three set to tipoff at 6:30 CST Saturday evening, the Memphis Grizzlies should be absolutely brimming with confidence. And why not? The damage has been done. Aside from the young Grizzlies swiping home court advantage away from the top seed in the Western Conference, the San Antonio Spurs are facing a handful of game-altering issues.The Spurs are physically dinged up with Manu Ginobili, despite an energetic return to the court, still not 100%. San Antonio also can't seem to find any consistent offensive rhythm with most notably Tony Parker’s game seeming to be on summer holiday in France. Welcome to the wild west.

Take the jump to read my quick drivel, take a shot at some talking points, and learn how to make Hirschof’s Famous Southern Hospitality Cake! 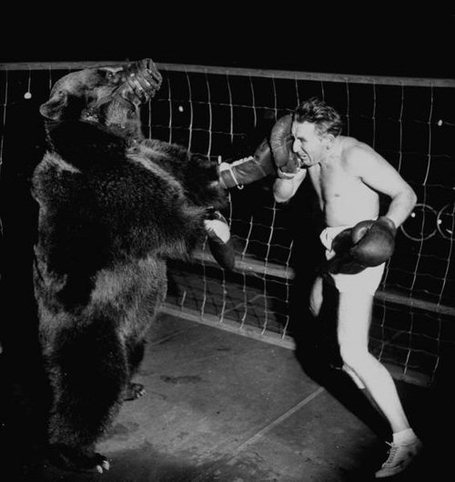 Visual representation of Spurs fight against the Grizzlies. Pray the muzzle stays on.

Through two games, I have been impressed by the poise and concentration the Memphis Grizzlies have displayed playing at the AT&T Center. There were numerous instances in both games when the Grizzlies found themselves flirting with a double-digit deficit but managed each time to regain their composure and claw their way back to tighten things up. At the end of game one, after a Spurs 10-0 run to make it 98-94 with only 66 seconds left to play, the Grizzlies could have easily folded in to the playoff pressure in a hostile environment. Instead, they knocked down the final open shots the veteran-laden Spurs could not to hit and, as a result, stole game one and the home court advantage. Even when facing an 8 point deficit with 75 seconds remaining in game two, the Grizzlies fought back to make it a single possession game before the Spurs sealed the deal with successful trips to the charity stripe. To win playoff series and championships, players need nerves of steel – no stage is too big and no light is too bright. The guts, ice in the veins, stones, etc. Whatever you want to call it, the Memphis Grizzlies have it – just like their more experienced counterpart. A veteran team like the San Antonio Spurs isn't exactly going to be intimidated walking into the FedEx Forum. To be quite honest, I doubt either team would lose their nerve playing in the Thunderdome. Well, maybe…

The San Antonio Spurs have a long history of closing out games. A game against San Antonio was expectedly and tediously long and painful - up until last season. Last season, injuries to veteran players and the absence of steady role players off the bench led to the most inconsistent Spurs basketball, aka random quarter collapse, in the Tim Duncan era. This season, the Spurs for have been a model of not only consistency but poise as well. Whether in hostile rival arenas or down by 20+ points, the Spurs have stuck by their new high scoring guns to knock out victory after victory resulting in one of the most successful regular seasons in franchise history. However, when Tim Duncan went down with the ankle sprain in late March, the Spurs ability to close games took a seat alongside their veteran big man and sparked the now infamous six-game losing streak. San Antonio held fourth quarter leads in five of the six loses but series of mental mistakes and poor play quickly led to the death of each opportunity. Despite the Spurs later exercising their frustrations out on a Nash-less Phoenix Suns and later a downtrodden Sacramento team, the then NBA-leading team still carried their consistency problems through the final six games of the season, evident in their three point season ending loss to lottery-bound Phoenix. Unfortunately, these inconsistencies and erroneous final minutes have carried over into the first round of the Spurs playoff run. Regardless of whether the regular season was 51, 61, or 71 wins, Coach Popovich would argue that the final number is essentially meaningless without four more victories in June. The Spurs won’t even sniff June if they can’t find a way to close out games against an eighth seeded team, regardless how tough they are.

From mental toughness, something I never thought I'd question, we go to physical toughness, an issue that has scared the hell out of the majority of Spurs fans for the last five or so seasons. Spurs fans cringed at the thought of a first round matchup against the Grizzlies. Not because we thought Memphis could bounce San Antonio from the playoffs but rather because we feared half of the Spurs roster would end up in casts and slings by series end. It hasn't been physical to the point of players being carried of the court (and hopefully for both teams it won't) but the games have taken their toll already. Antonio McDyess has been dealing with back spasms for several weeks and after a hard fall Wednesday night, was seen again massaging his lower back and grimacing in pain throughout the second half. George Hill came close to ending his playoff run during a dive for a loose ball. Hill braced his left hand onto the court almost directly underneath of him and in the process jammed/strained his shoulder. Hill left momentarily to stretch and ice his shoulder but it was obvious the injury was still later bothering him even during his four consecutive free throws to ice the game.

Regardless of how sore and physically beat up the Spurs may be feeling in between these games, I absolutely love how they refuse to back down from possibly the most physically brutal team in the NBA. Manu Ginobili, robot arm and all, threw all regard for his own injury out the window by fighting for every loose ball and throwing himself in the middle of every defensive play. I wonder how different the rest of the team would have played if Manu wasn't out there running through walls and getting under everyone's skin. Blair, Hill, McDyess, Duncan, and others were screaming and radiating huge amounts of energy. I believe it is safe to say Manu was the catalyst for this surge of electricity. If the Spurs could channel this into some consistency on the offensive end, the next trip home for the Memphis Grizzlies will be their last.

Get to arguing, Pounders.