Share All sharing options for: Spurs 93, Grizzlies 87 - How robot-arm Manu won my heart 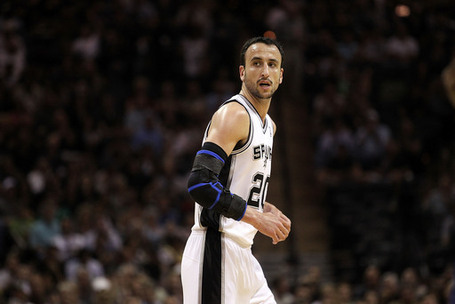 There's no hiding from the truth, friends, not anymore. This series will be a battle, hard-fought, bloody - hard on the players and even harder on the fans. I am convinced that the Spurs and the Grizzlies' records are a faithful representation of where they are as teams when playing against the continuum of styles that is the NBA, but their head-to-head matchup is unfortunately closer. They are the defensive-minded, bumpy team that bothers us the most, almost a negative copy of our regular season free-wheeling self, and it shows.

No one said the playoffs were going to be a stroll in the park. So far, it's been more of a teetering walk along a tightrope, with the ignominy of the Mavericks-Warriors debacle waiting for us to slip and fall to its depths. Yet the truth is that it took a last second shot for Memphis to win game 1, and that as close as the final score of game 2 may be, when the Spurs had its full team, they won.

It's 1-1 now. We go to Memphis as we have gone to Phoenix before, or Denver, or Dallas. We have Tony Parker, and Tim Duncan, and McDyess, veterans of many such moments, MVPs. We have Popovich, we have Manu.

I slept 13 hours last night. That's right, thirteen. I don't remember the last time I slept so much, without any breaks. I would like to blame the few hours of sleep I got through the week, and the project-that-was-due-for-Tuesday-morning-and-not-a-minute-later - but, truth be told, the game last night might have had a lot to do with it.

I was hesitant to tackle this recap. I watched yesterday's game as a fan, not a blogger. Strategy went past me, the intricacies of the coaches' game plans stayed beyond me, and as I try to look back, all I'm left with is impressions, broad strokes in the canvas. I'm left with the emotions of the fan that watches a high-stakes game and keeps begging for this or that to happen, for RJ's triple to fall or Hill to make those freebies, for FSM's sake, make 'em! I retain the excitement of watching Manu play and play well, damn well, even though his shot from the free throw line reminded me of Tiago's for a second there, in the second half. And I remember the giddiness of winning our first playoff game in way too long.

It was exhausting, so much so that no one else could write about it last night, the shell shock rendering us unable to do anything but post funny pictures in the post-game thread. Here's a late recap, the best that we could do, a hack effort truly worthy of Pounding the Rock. Enjoy.

I can't help it, I need to get this out of the way now. I can't talk about the likes of Bonner before I put into writing (try to, fail to) what Manu did for us in last night's game.

He walked out into the court with a blue and black arm brace that wouldn't be out of place in a Robocop sequel, bulky and uncomfortable-looking. Then the game started, and he exploded into action. It was almost like watching a bull in Pamplona, a bloodhound after its prey, Bonner in a sandwich restaurant - relentless and single-minded in its obsession to disrupt the other team's offense, always bumping into people and flying after loose balls, with moves that made us cringe in fear for his right elbow. As usual, the boxscore is woefully inadequate to show Manu's impact on the game, with the game-best +16 plus/minus as the sole glimpse into the Spurs' dependency of his vim, his heart.

During Game 1, his absence left the second unit helpless before the superior Battier/Arthur combo, and even though our bench's cold shooting didn't help them much in Game 2, at least they were able to break even. Hill in particular looked more comfortable as the 1-2 hybrid along Manu, the Robin to his Batmanu, even though his field goal percentage only improved marginally. We've said it many times, and we'll keep on saying it: exactly three players in the Spurs are able to pass the ball creatively and consistently in the Spurs' roster: Manu, Tim and Tony. That's it. When we lose one of them, one third of our offensive versatility are lost with them. Consequently, the 13 assists of Game 1 turned to 21 in Game 2 - the passing bug is contagious, and it shows.

Manu mentioned after the game that his pick and roll game had been rusty last night. If the bench was able to break even with only two points by Blair, what can we expect from it if he starts receiving Manu's passes again, passes that will give the Beast enough room for the acrobatic layups we are familiar with?

Manu won the game at both ends of the court, doing a little bit of everything, pushing the Spurs forward with his infinite energy and his exquisite sense of the moment. Manu won it through his influence on the team as a whole - he's the kick in the 'nads, the bucket of cold water and the cup of bitter, dark coffee. Disagree at your own peril.

Why won't they go away, dammit

If my numbers are correct, and they might very well not be, we never led by more than 8 points, and they never got further than 6 points from us (they looked like a million points at the time, though). Even though we were ahead longer and spent most of the second half in the driver's seat, they answered to our every run in kind, and even when we finally created some breathing room in the last minute of the games, we left them score enough to put the fear of FSM into us. Party, speedbump, crossed fingers, party again. It was a fitting end.

Pop's adjustments, the ones I could see, were evident through its results. Randolph was contained, after a fashion, and Gasol came down to earth despite five trips to the charity line. Even the rebounding effort was won by the Spurs, albeit by only one rebound, thanks to a team-wide effort. The lane was packed, and Pop dared Memphis to beat us with guard play. Unfortunately, Tony Allen and Sam Young stepped up to the challenge, and hit some tough shots despite the Spurs' pressure.

I take heart in the Spurs' defense through the game. Memphis' 40% shooting won't make Pop crack a smile, but in spite of a couple of stretches where they got away from us, I thought that the Spurs' effort was excellent. Playing against a team that bothers them, in a high-pressure game, their performance is encouraging, a step in the right direction.

Why was this game as close as it was? It's a difficult game, and the answer is probably "everything", but then I wouldn't be able to lambast random players. And where's the fun in that?

I want to channel my inner Bruno for a second here. I am one of those weirdoes that believes that Bonner can be a very useful tool in the playoffs, as a dead-accurate big man that stretches the floor for the second unit and gives space to Neal, Hill and Manu. I'm happy to give him minutes in that context, when the defense is collapsing and the back-up big isn't likely to turn him into a defensive liability. That is not the case in this series. He has been hesitant to shoot when the ball swings his way, he has been well covered by the excellent Memphis defenders, and most importantly, he has been victimized by a myriad of players, who seem to be focused on abusing the redhead. His only hope of keeping people from driving into the paint for short hooks or easy layups appears to be fouling, and he has done that, over and over. Darrel Arthur licks his chops every time he is covered by Matt, and we can't let this happen.

The solution? Well, despite the horrible blocks that remain in our minds from Game 1, and his poor accuracy in Game 2, I believe that DeJuan Blair should take his minutes. Not all of them, mind you, but some. Plenty. DeJuan Blair is capable of providing the Spurs with a spark that is sorely needed whenever Manu sits on the bench. And if it's spacing the floor that we need, then more minutes should be given to our only fearless bench player besides Hill, one Gary Neal.

I keep expecting to see Gary Neal take a shot from midcourt, just because. He is crazy enough to believe that he would make it, too, because that's who he is. Fearless, don't-tell-me-the-odds, that's his game, and his increased prominence in the second unit can only help the Spurs, especially when paired up with a guard-thin Memphis bench in which Mayo isn't smart enough to take advantage of Neal's defensive lapses. We need madmen right now, and fortunately we have one ready for some playoffs primetime.

Is it fair to look at the starters, when only by their influence was Game 2 won? To me, it comes to a comparison between expectations are reality. Richard Jefferson played something markedly close to a perfect RJ 3.0 game, scoring well from outside and being aggressive when the chance presented itself. Timmy's only fault was that he didn't shoot enough, considering that his efficiency is clearly the best in the team throughout 96 minutes of basketball. He ought to be taking 20 shots per game, 25, not 13. Gasol cannot stop Tim Duncan, and we should remember that.

My biggest disappointment, though, has been in Tony Parker's game. Not because he was worse than the other starters by a big margin, no, but because I always expected him to be a difference maker when matched to Conley. This was a matchup that had clearly worked in our favor in the past, as you can see in Stats Cube. However, if you add their statistics from the last two games, and I didn't tell you which belong to whom, you would be hard-pressed to tell them apart. Check it out:

The edge still goes to Tony, I admit it, but it's still far too close for comfort. His best decision during Game 1 had been to drive inside hard when his shot wasn't falling, and earn his points at the free throw line. 12-16 he shot that night, and kept us in the game when everybody else failed. Last night he was 0-0, content in letting Manu take the brunt of the Grizzlies' brutish defense. Instead, while defended one on one by noted slowpoke Marc Gasol, he chose to shoot a long jumper from the elbow. Color me unpleased.

Now the Spurs have to win Game 3, because that would finally make Memphis experience some pressure, and they might miss a step because of it. They walked into Game 1 with nothing to lose, and knew that Game 2 was optional. Game 3 is as far as that attitude will survive, and the Spurs need to seize the moment. Let's read them a bedtime story, pat them in the head and ruffle their hair.

Then let's put them to sleep.

3rd. George Hill. His shot isn't falling, but he rediscovered the corner 3 that made him the jewel in Pop's eyes. His willingness to penetrate and take the hits can't be overlooked. His jumper will return.

2nd. Tim Duncan. He's dominating at points, comfortable in the absence of aggressive double teams. We're not going to him often enough, but he's making the most of it, and his energetic blocks and dunks seem right out of a younger Duncan's repertoire.

1st. Manu Ginobili. He makes basketball fun for me. I owe this guy a lot.