Share All sharing options for: Photos - Manu: "I just play basketball the only way I know how to. . ."

Manu has said many times he only knows one way to play basketball - and that's at full speed. It has been said that "courage is the absence of fear; it is the willingness to do what has to be done." By that definition, Manu was extremely courageous in game two against the Grizzlies. Early on, there was a bit of caution: Tim asking Manu if it was okay to help him up from the floor by pulling on his right arm; Manu taking another tumble going after a loose ball and tucking his right arm in before he hit the floor. That ended quickly as he roared in to block a shot, drove hard to the rim and was fouled, and ended up in a grabbing, kicking scrum on the floor with Shane Battier to try to control a loose ball. Caution took a back seat, and Manu became SuperManu once again.

When Manu's name was called during introductions, the AT&T Center's roof was raised a few inches by the cheering from the fans. 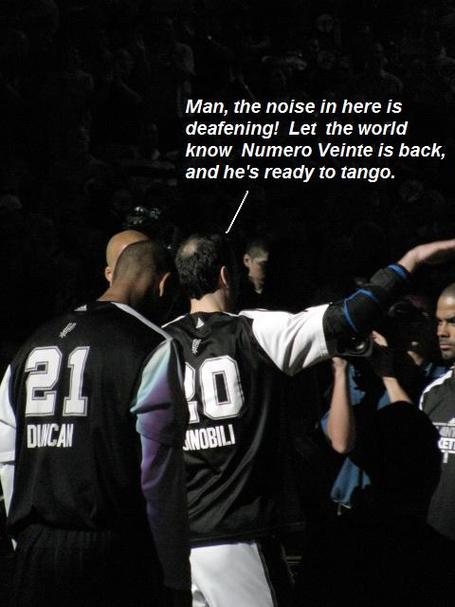 During warmups about an hour before the game, Manu was hitting about half his shots. The brace, a smaller one than the one he had been wearing during practices recently, definitely kept him from extending his injured right arm. This photo shows how the lack of extension prevents him from keeping his right hand on the ball through the shot, making his left hand take over more of the task of stablizing the shot. 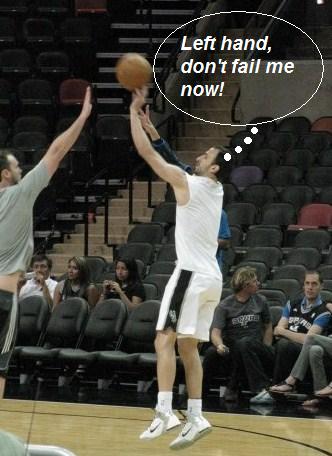 Rudy Gay of the Grizzlies, recovering from surgery, was perhaps engaging in a bit of basketball fantasy during warmups. 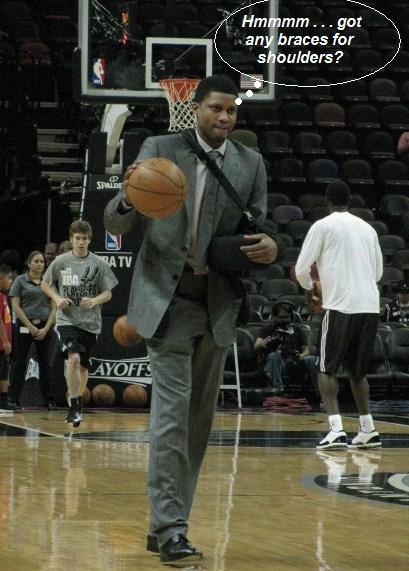 Zach Randolph warmed up without his trademark headband. 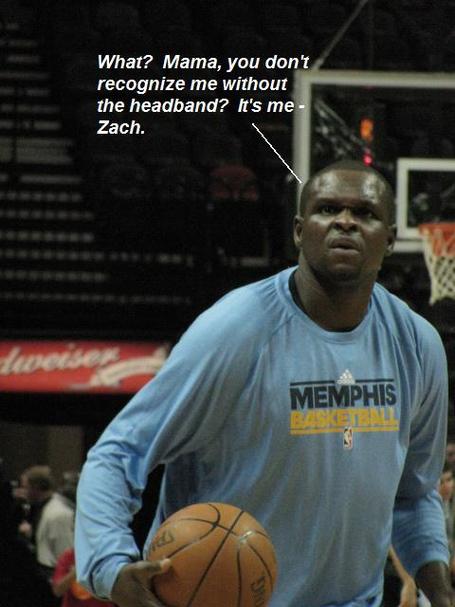 The Spurs came out with more focus. George Hill and Richard Jefferson had their game faces on during introductions. It must have worked as Hill's focus continued through those game-clinching free throws at the end and Richard's aggressiveness was evident throughout the game on both ends of the court. 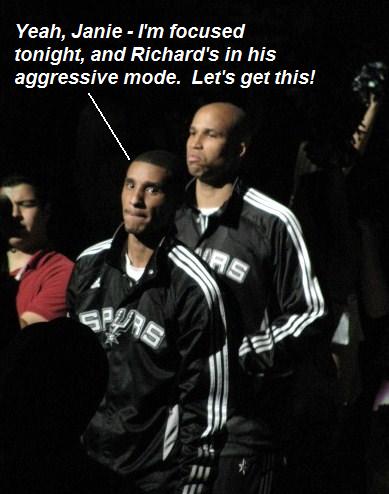 Antonio McDyess has a pre-game ritual of waving at his "fan club", always with a big smile. Tonight, the smile was replaced by a very serious game face. The Spurs were ready for this one. 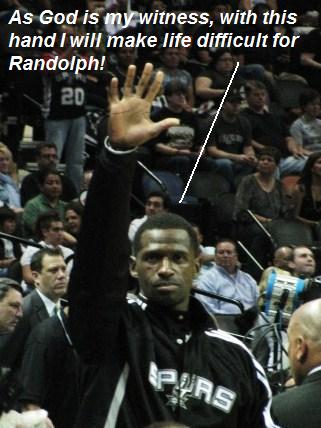 The game was physical from the opening tip. McDyess and Randolph are already tussling, and Tim is putting an elbow into Gasol's side as both jump for the ball. 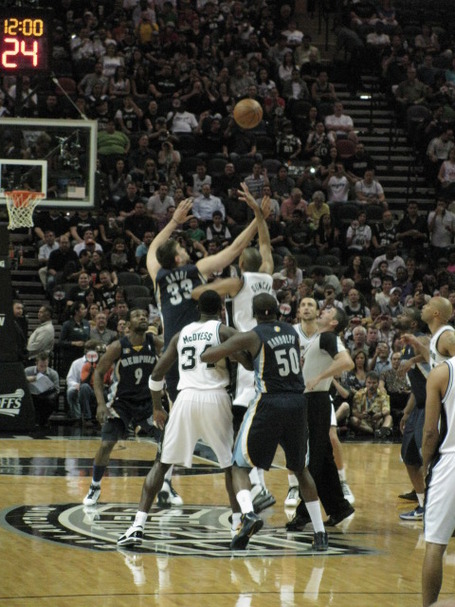 RIchard and Gasol go for a jump ball early in the game, but notice what is going on between Manu and Conley. Manu was asked after the game if he thought the Grizzlies ever intentionally went after his right arm, and he replied that any contact was just normal for a tough playoff game. 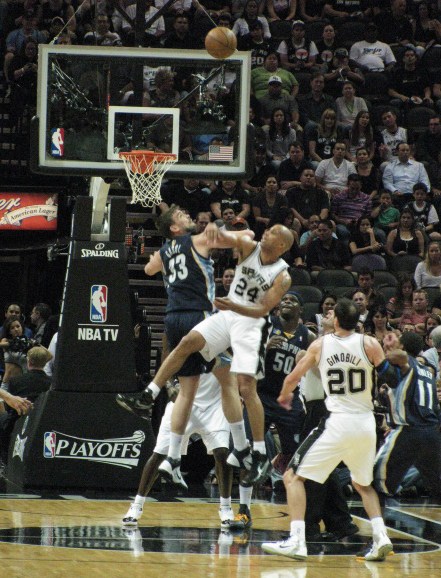 Duncan and Gasol continued their battles on both ends, but Tim would get the best of it tonight. 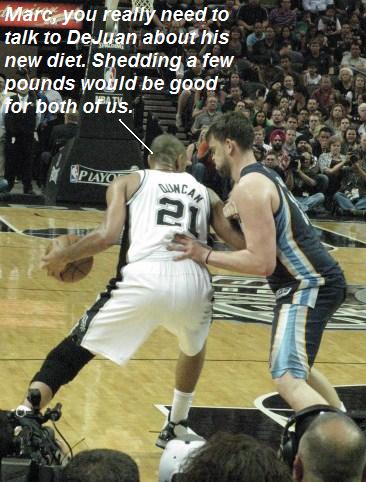 Reliable subs Hill and Battier could hardly wait to enter the game in the first quarter. 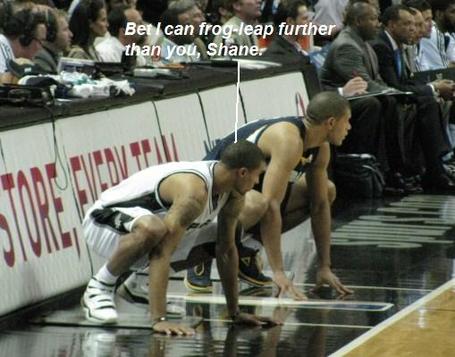 Manu's free throw shooting was most affected by the brace on his arm as he connected on only 7 of 13 from the line. 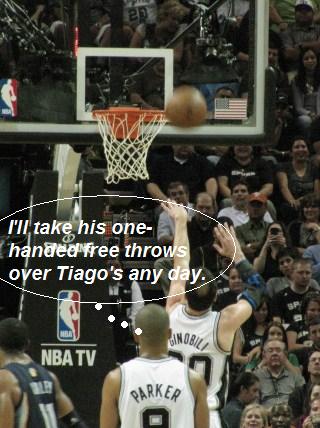 For comparison purposes, I went back and found a photo of Manu shooting a free throw on Feb 23 against the Thunder. It is about the same point in the shot as the first photo - just after he has released the ball. You will notice a difference of several degrees in the angle of the bend in his right arm. It's a subtle thing, and maybe I'm just seeing things. I don't think it's just due to an inconsistency in his shooting form but has more to do with how much of his right hand is in contact with the ball at the point where his left hand propels the ball toward the basket. 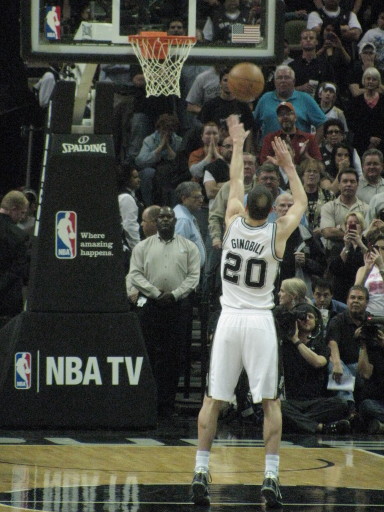 I tried to get the best shot of that brace that I could . . .at one point I did see him rip off one of the straps on the lower end because it had come loose. At the next time out, the trainers immediately replaced it and tightened it up. He's willing to accept the limitations in exchange for being in uniform. 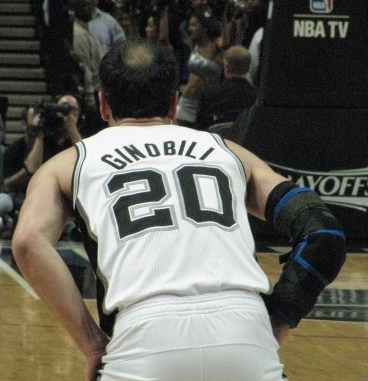 Once again, This Is OUR House. Now on to Memphis with hopes of stealing at least one on their court to regain that home court advantage. I'll be there - row 12 behind the bench for the first game, row 8 at the corner of the baseline for the second one. I hope to get some good photos, but shooting in a 'foreign" gym can sometimes be tricky. 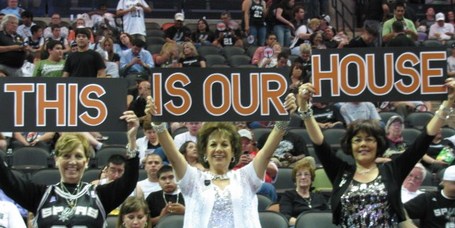