What if? What if Manu had played? This has been the theme of questions burning across the Spurs fan nation. Beat writers, blogs, twitter accounts, and various other forms of media spouts have been pouring over this subject even before Sunday afternoon culminated on a clutch Shane Battier three point shot to give the Memphis Grizzlies the final lead.

So here we find ourselves asking the most futile question ever conceived.

What if Coach Popovich let Manu Ginobili play on Sunday? What if Manu’s presence on offense altered the defensive schemes of the Memphis Grizzlies? What if Manu being there on the court lifted the pressure off of a struggling George Hill? What if Manu could have gotten the rest of his teammates going? What if it was Manu taking that last second three pointer and not Richard Jefferson?

The Grizzlies are not a "sexy team." The small market brawlers are not blessed with high flying and/or prolific scorers. Memphis relies on hustle, physical play, and smart defense. They want to pound you into submission and drudge out a victory. Playing against the Grizzlies in one game is tough. Facing them in a seven game series is physically daunting. Sound familiar? Just take a glance at the Memphis roster. Michael Conley; heavily touted for 2010-2011 all-defensive honors and the only player to date to hold Chris Paul scoreless. Tony Allen; an unrelenting cannonball of speed and strength mixed with exquisite defensive technique. Then there is Shane Battier; an intelligent blue collar player with NBA defensive honors who plays at, as Coach Pop once put it, "100% ferocity all the time — a ferocity with sense." Three talented defenders who would rather cram their own arm down your throat rather than allow an open look at the basket and we haven’t even trekked into the Grizzlies’ monstrous frontcourt.

With Manu in street clothes, the Memphis guards isolated their intensity on the Spurs' leading scorer, Tony Parker. Michael Conley consistently defended Parker loose, giving Tony plenty of looks and room around the arc while sealing up the paint with Gasol and Randolph lurking nearby. At times, Conley practically dare Parker to take the deep jump shot. The end result was a 4-16 FG performance and pedestrian 5 assists and an obvious absence of Ginobili’s multi-faceted ability to create offense for the San Antonio Spurs. Whether Manu’s presence would have helped Parker to knock down his jumpers is unknown. What is known is that Ginobili, like Parker, draws a crowd. The two-pronged attack of Manu and Tony not only opens up the perimeter but causes the big men down low to adjust more frequently. Lanes to the basket begin to open up and, even if the defense manages to close in, both guards are exceptionally talented at finding an open as a result. However, with no Manu, the Grizzlies were able to basically isolate Parker from his team. Whenever Parker drove to basket, whether from iso or off screens, the Memphis defenders funneled Parker into the trees while covering the available passing lanes. If you’re wondering why San Antonio only managed four three-point attempts in the first half, the answer is simply because the ability to find the open shooters wasn’t there.

With Parker at the mercy of the Grizzlies, the Spurs needed someone to step up the pull the attention. And even with Duncan turning back the clock a few years, it wasn’t enough to fill the game changing role that Ginobili has naturally fulfilled his entire career. Manu’s presence and hustle alone on both ends of the floor dictates the flow and outcome of possessions, quarters, and games. How many times have we seen the box score skew the invaluable impact Ginobili has made in a game? Could Manu have altered game one so much that the Spurs held home court instead of dropping down 0-1 in the series? Could Ginobili, who although is less efficient of a three-point shooter than both Hill and Jefferson, become clutch yet again and drain either of the thee-point attempts at the end of the game? 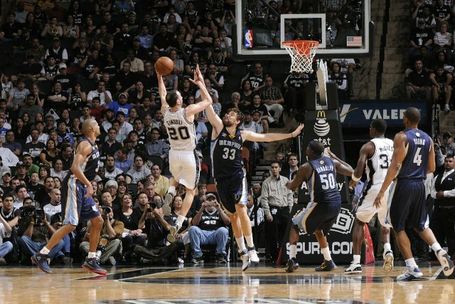 What if Popovich allowed Ginobili to play on Sunday? What if Manu was too tentative to drive the lane and settled for ill-advised three-pointers? What if Manu’s elbow didn’t get the extra three days of rest and rehabilitation? What if Manu was unable to play at the level the Spurs need him to be at? What if a Tony Allen swipe or bump re-aggravated the elbow strain? What if the Spurs lost Manu for the rest of the series?

Manu Ginobili is no longer the same "El Contusion" so once lovingly titled by former Spur, Brent Barry. Ginobili turns 34 this July and, by post-season’s end, will cap off his 16th season as a professional basketball player. Factor in all of the minutes put in with the Argentine national team and you have one worn out odometer. Make no mistake, Manu can still whirl and clash with the best of them but his body is no longer capable of absorbing and recovering from all the impact. If Manu’s body was able to keep up with his passion and heart, Tim Duncan would be counting rings on his second hand by now. How much of an impact does 72+ hours of additional rehab and recovery make? Possibly none but also possibly enough to be the difference between a nagging injury and positive recovery. These are professional athletes performing extraordinary talents with human bodies. They are not machines and they are not you or me rolling an ankle at the local gym’s court. Pop’s decision to sit Ginobili was a calculated risk. Pop knows more than anybody else that the Spurs playoffs hopes live and die with the big three. If decreasing the probability of re-injury meant increasing the risk of dropping a game in a series of seven, so be it. Coach Pop would much rather have a 75% Ginobili for six games than a 50% Ginobili for seven.

Even if Manu had played game one against Memphis, how effective would he have been and for how long? Would he have returned to running through walls like the Manu of old or would he have started jacking up the ill-advised three-pointers that have periodically plagued the Spurs offense this year? Keep in mind that Manu has put up 441 shots from deep, 91 more than last season and 52 more than his previous high in 2007-2008. A small sign that Manu’s game is moving away from the gauntlet runs in the paint. And for a player who relies so heavily on his production from the outside, a weak and aching support arm can be detrimental to his shooting mechanics. Yes, Manu is left handed but he doesn’t shoot the ball one-handed. And even though "Manu goes left," his ability to finish on both sides of the basket has been weakened with the strained right elbow. So the questions keep rolling. Would Manu be as physical on defense as usual? Would he have been willing to reach for the ball or purposely foul a shooter? Would Manu dive for loose balls or throw his arms up to draw a foul? If you say yes, does that not drastically increase the chances of re-injury? 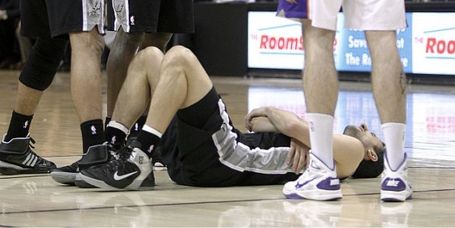 An abundance of questions with hardly any answers. The clearest answer belongs to the theme of this post. What if? What if Manu had played?

There is none. We will never know. The dice have been rolled and the risks taken. Coach Popovich and the San Antonio Spurs have roughly two weeks to see if their gamble pays off. The Spurs are moving forward and so should we. The question of the week is "What do the Spurs need to do, as a team, to win?" However, I have a hunch that too will be overshadowed by the next "What if?"

What if Manu doesn't play on Wednesday?