I previously was writing an article emphasizing how the Memphis Grizzlies rely on their post up game. In the first game of the season, they used the post up with Randolph and isolation with OJ Mayo. Spurs won that game. In the second game, the Grizzlies abandoned their post up scheme and paid dearly for it. Spurs won. In the next two games, the Grizzlies went back to their post up game. In game three, Parker did not play. Memphis' Darrell Arthur, Tony Allen, and Zach Randolph had more then 20 points each. Spurs lose by 16. In the final match up, Tim Duncan did not play for the Spurs. The Grizzlies utilized the post up game 24.8% of their possessions, or 26 of their 105 overall. This game, Tony Allen and Zach Randolph both had 23 points and were very effective for the Grizzlies. Spurs lose by 7.

That being said, join me after the jump so I can show you how Memphis utilizes its post up game by illustrating and breaking down a few of their plays. 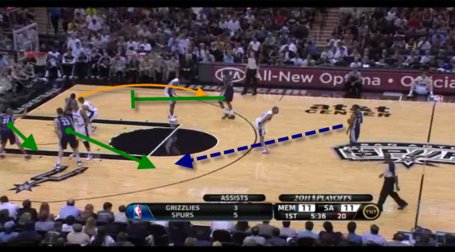 The play starts with the 1 guard, Mike Conley dribbling up the center of the court. Zach Randolph is walking towards the right side of the court to set a pick (which isn't even executed). At the same time the 2 guard, OJ Mayo curls from the top of the free throw line, across the paint, and from the corner to the right side wing. Marc Gasol goes to the left elbow to receive a pass from Conley. At the same time, Shane Battier establishes in the left side low post, awaiting a pass from Gasol. On the weak side (the side of the court without the ball), Randolph is still walking to the right side baseline. 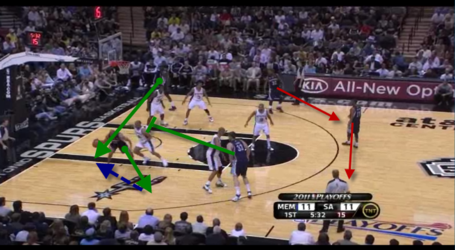 The main concern that Spurs fans have is when Duncan and/or McDyess are substituted with Bonner and/or Blair. While it is true that the match ups of Bonner and Blair on Randolph and Gasol are debatable, their defensive play is polar opposite to Duncan and McDyess'. Blair defends Randolph with his athleticism, fast hands, and fast legs. Bonner tries to defend like Blair, since he lacks the height. It's kind of like telling Bonner that when he gets in the low post, to just stick your hands in the air and hope for the best. The other players on the court have to change their defensive scheme as well when Bonner and Blair are on the court against Randolph and/or Gasol. In the following clip, Bonner brings Gasol under the rim and Parker comes to give help defense which pays off:

Blair's athleticism pays off against Randolph: