Share All sharing options for: Photos - Keep on Believing

Spurs Jesus was courtside tonight with a reminder for all Spurs Fans: "Believe". I'm going to heed his word. 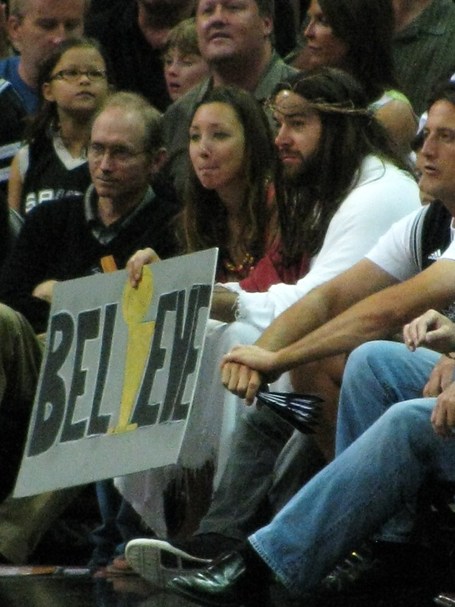 Playoff atmosphere in and around the arena is special. The AT&T Center was decked out with special banners and signs. This one is about 20 feet long and hangs beside one of the entrances. It was all anyone would see of Manu in uniform tonight. 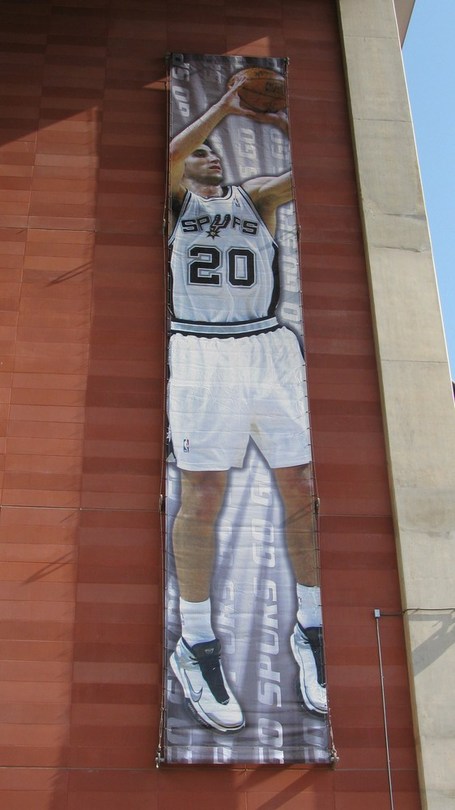 If you read Hirschof's story on Gloria and Will Drash, you know what huge Spurs' fans they are. When the playoffs arrive, Will paints his face black and silver and dons a spike wig and basketball-patterned shirt to support the team. 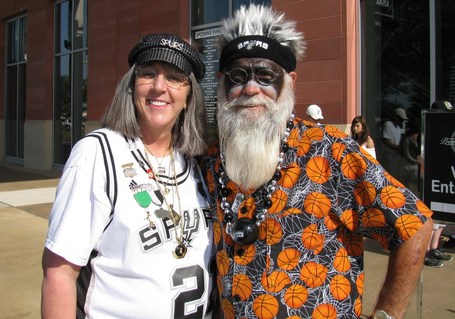 Legendary NBA Fan Jim Goldstein was on hand. He lives in LA, hates the Lakers, and travels the country watching NBA games. He shows up frequently at Spurs' playoff games, always in his trademark leather outfit. He seems to know everyone in the Spurs organization - I saw him talking to RC Buford, Peter Holt, and Steve Novak before the game. 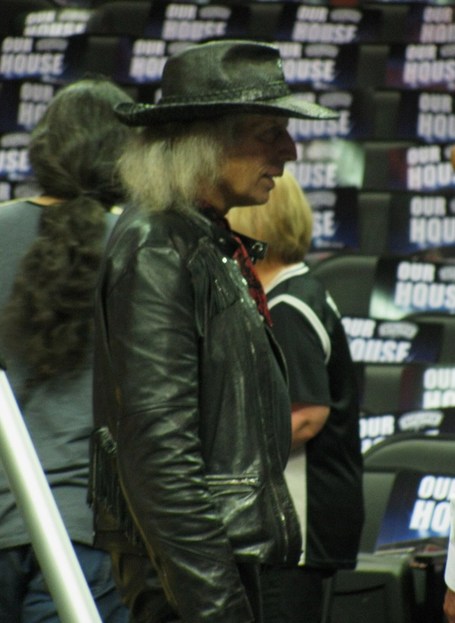 The Grizzlies had the choice which goal they would shoot at to start the game, and they chose the one in front of the Spurs bench. This meant that they also warmed up at that end, which is completely opposite of the norm. I caught this shot of Hamed Haddidi that is just plain Frankenstein-like. 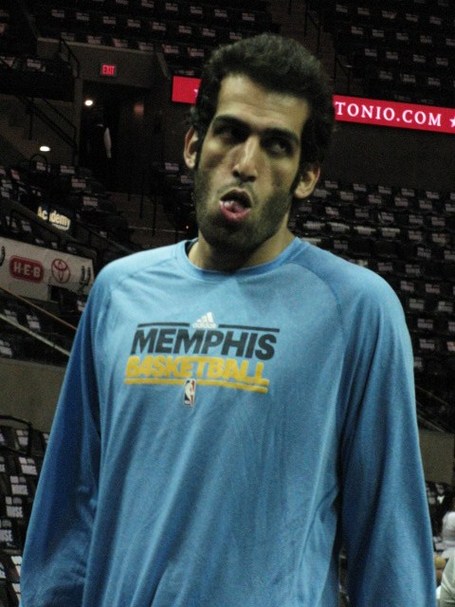 Tim Duncan and Marc Gasol battled most of the night. Neither one seemed to be able to effectively defend against the other one. 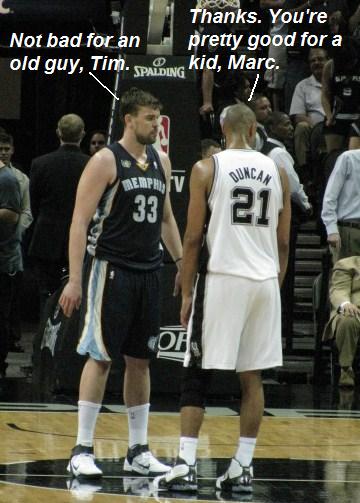 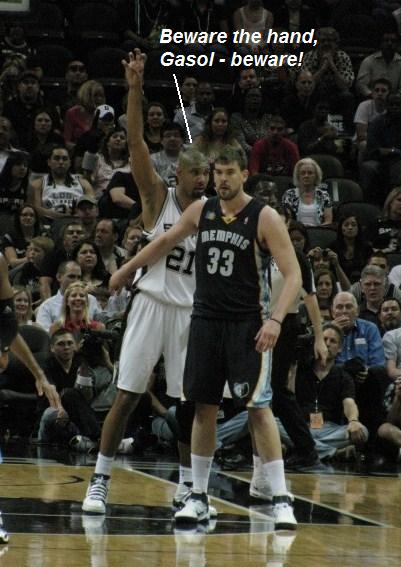 This is a pretty shot by Tim over Gasol. 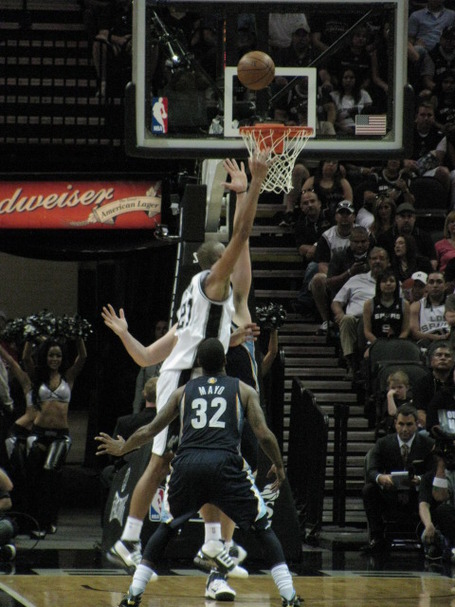 Much has been said about how physical the Grizzlies are. They are a bit "sneaky" in some of their physicality sometimes, as caught in this photo - the very slight and subtle hip bump by Randolph on Hill as he shot. No foul was called. 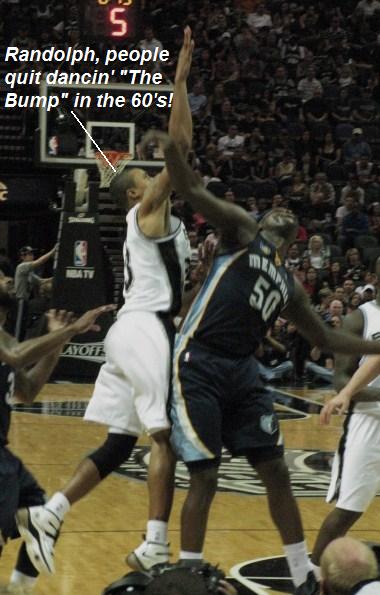 Other times things weren't so subtle: 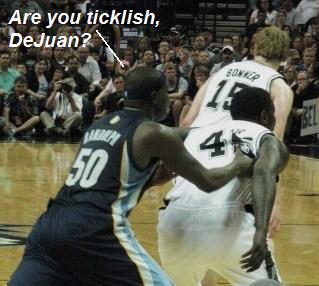 DeJuan would go down hard on this one, grimace a little, then get up and drain both free throws. 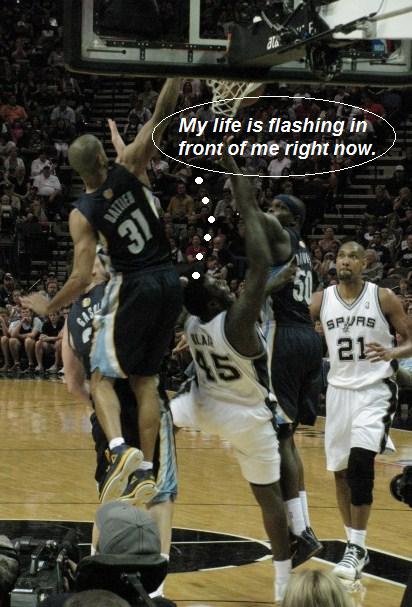 Manu was obviously not happy to be wearing a sport coat tonight. He did give his team mates a lot of encouragement and did a little sideline coaching from time to time, but the disappointment really began to show in the last minutes of the game. The towel around his arm is just that, a towel he was holding. 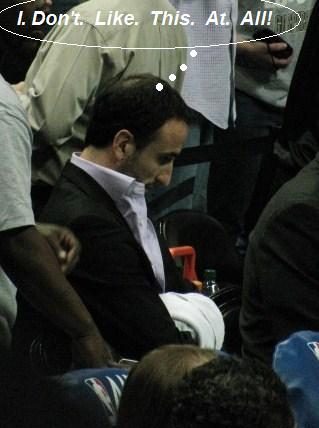 Keep the faith, Spurs fans. I am. I have tickets for the two games in Memphis, near the bench, and plan to watch the guys steal at least one back from them in their house.