Q&A with Welcome to Loud City

Share All sharing options for: Q&A with Welcome to Loud City

Welcome to Loud City, the Thunder SBNation blog, is putting together a series of Q&A sessions with all the Western Conference Playoff teams. SpursFanSteve started conversation, and now Dogburt returns the favor by giving us some insight into a possible future oppenent (assuming the Spurs decide to start hitting shots).

1. I'll start with an easy one. Evaluating the Jeff Green/Kendrick Perkins trade, who do you think "won" that trade and why? Has losing Jeff hurt your offense more than gaining Perkins helped your defense?

I personally have to answer this question from a position of battling emotions. I was actually a big fan of this latest championship iteration of the Celtics. I was mad when they lost the Finals to the Lakers in part because they lost Perkins to injury, and I was sad to see that their core group of veterans was giving away a chance at redemption. On the other hand, if you were to describe the singular missing component that the Thunder needed, Perkins would fit it to a T. Everything that the Thunder were lacking this year to make a serious playoff run - interior defense, accountability, fortitude, playoff focus - were instantly filled when Perkins stepped on the court. On top of that, it allowed all of the Thunder's remaining pieces, specifically Serge Ibaka and James Harden, to better fulfill their own roles. Everything about the picture became clear. This is now a team that has every piece it needs to compete for a deep playoff run. The only thing they lack is the requisite experience.

I wish I could say the same thing for the Celtics. While they have gained a center who can score (Krstic) and a swing player who can spell Paul Pierce for periods of time (Green), I don't think you can look at that Celtics team now and day that the loss of Perkins hasn't affected them in a very profound way. The concept of Ubuntu enraptured the soul of that team, and now it is as if a piece of that soul has been transplanted to the mid-west. Perhaps going to battle in the playoffs will help them rediscover that warrior spirit collectively, but for the time being, I worry about whether this is the Celtics' last best chance in their current edition.

Losing Jeff Green did affect the Thunder's overall offense, but the dark secret that lurked beneath the surface was that Green was better suited as a bench player than a starter. OKC's overall offensive efficiency barely dipped after Green left, but their second unit did have a little bit more trouble scoring. However, this is where the removal of Green allowed for the emergence of Harden. He gives the team everything that they lost with Green - scoring and offensive efficiency - and adds on top of it better passing, better defense, better rebounding, and better beardhawk. 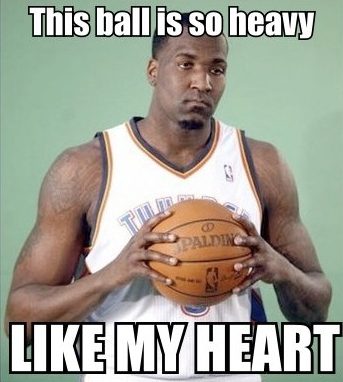 2. Aside from Durant and Westbrook, which player is the most likely to destroy an opponent?

The one player who possesses the ability to elevate his game in big moments is also the guy who has been the most maligned this season - James Harden. Harden has had to fight the diminutive shadow cast by Stephen Curry, and it is only as of late that he began to demonstrate the skills that have made him an integral part of the team concept.

For the time being, Harden is playing like the perfect sixth man. He steps in whenever he is needed and does whatever is needed. He has proven that he can coordinate an offense for stretches, he works really well with other teammates like Westbrook, Eric Maynor, and Nick Collison, he does not need a lot of shots to put up big numbers, and most importantly, he has proven that he is unafraid to step up and take game-deciding shots.

On top of that, Harden is a guy that walks with an air of coolness. He's Superfly and Barry White. He comes through when it is needed, and he looks great doing it. 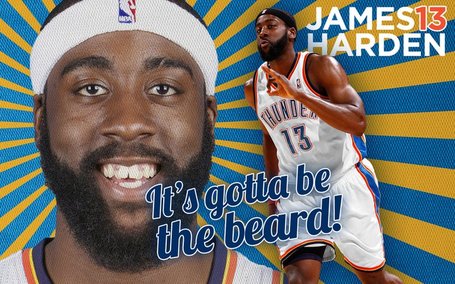 3. Nick Collison shoots three's during warmups (I live in OKC and am an occasional visitor to Loud City), but never in a game. Is this a secret weapon for the playoffs or would everyone in Oklahoma City go into heart failure if he started actually shooting them.

That is a great observation, but I highly doubt that Nick Collison is going to start taking those shots in games unless there is a shot clock situation approaching. That said, the observation does touch on something that I have seen with increasing frequency. As the season went on, Collison grew more and more confident setting the high screens and, instead of rolling to the rim, he faded to the elbows and shot the 18 footers with confidence. When he catches, sets, and steps into the jumper, it is a very accurate shot.

When Collison added this wrinkle to his game, it signaled two things: 1) Coach Scott Brooks is branching out with his play calling and trusting his players; and 2) the high screens are becoming integral to the OKC attack. Now, the Thunder can run that play with these players: Durant, Westbrook, Ibaka, and Collison. Either Durant or Westbrook can operate with or without the ball, and both Ibaka and Collison can screen and fade to receive the ball for an open jumper. Defenses will be faced with big decisions on how to defend such a play as it becomes a staple in the playoffs.

4. How much does it annoy you when ESPN commentators refer to you as "Oak City"?

The ESPN guys as a general rule are terrible sycophants, so in a way it is quite fitting. There is something calm and reassuring when the spots you perceive on the leopard are in fact spots and not something more insidious. Like mutant vampire leeches, for example.

You are going to be shocked to hear this, but I'm actually somewhat partial to the nickname, "Loud City." I know, crazy. 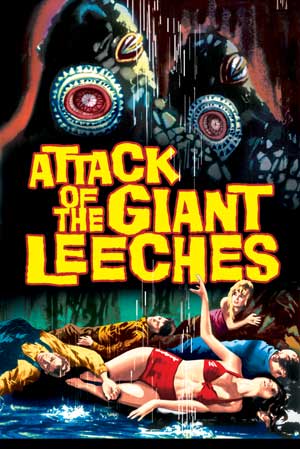 5. What worries you most about playing Denver? Which matchup is going to be the toughest?

I think the main worry that I have that the Thunder might face is the prospect of losing home court advantage when they had worked all season to earn it. I'm sure Spurs fans understand this sensation all too well, and from both sides of the equation. A team's resolve is tested when they lose at home, and I do not yet know how the Thunder will respond to such a challenge. I'm sure it is emotionally and psychologically taxing. Suddenly the attitude goes from, "we've got our home crowd behind our back, we just need to take care of our business," to, "Oh no...how are we going to win on the road??? In DENVER???" If the Nuggets can steal one of the first two games, it will usher forth a series-defining moment.

For match-ups, the Nuggets boast the two quickest guards in the game, and the Thunder has already demonstrated that they cannot stay in front of Felton or Lawson. However, the guy that worries me the most is Danilo Gallinari. He is the one guy on their team that seems like he can cause all sorts of problems with how the Thunder want to defend the Nuggets. All season long, OKC has struggled with big men who can step out and shoot from the outside. They were killed by Pau Gasol and Andrea Bargnani, and Gallinari seems like he can play in a similar way. It will be critical to limit his scoring opportunities.

6. How would you assess the Thunder's season this year? What do you think it will be remembered for? (OK, I stole that one from you, but it was a good question.)

As for a final assessment of the season, I thought from the beginning that the Thunder's effort should be considered a success if they won more games than they did last year and won a playoff series. I thought that if they could position themselves to get home court advantage for at least the first round, OKC would stand a chance to allow their home crowd to carry them to a series win. Objectively, I still hold to this particular view. When all is said and done, if the Thunder can do that, then I think they will have taken huge steps to paving the way for a legitimate shot at a championship. That's pretty cool.

But then again...it sure is easy to want just a little bit more. 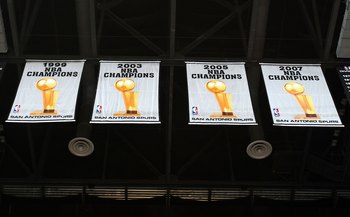 It's not bad to want this.