Spurs Lose to Grizzlies, and All is Well

Share All sharing options for: Spurs Lose to Grizzlies, and All is Well

When Shane Battier's three pointer rattled in with 23 seconds left in the 4th quarter and gave the Memphis Grizzlies a one point lead, every Spurs fan alive could have been jumping up and down for joy. When George Hill's corner 3 bounced away from the rim, the city of San Antonio might have called for an immediate celebration. And when Richard Jefferson's jumper from the top of the three point arc failed to drop, those familiar with the history of the Spurs had reason to immediately start a petition to honor him with the key to the city.

The dream is alive, my friends, and all is well in Spurs-land. Anyone puzzled by this response to a harrowing Game One loss to the eighth-seeded Grizzlies, need wonder no longer. No, I'm not calling for anyone to root against their favorite team; nothing of the kind. A brief trip into the history of the Spurs will bring all into laser-sharp focus.

Readers who are familiar with my New Odd-Numbered Year theory (which I unveiled in March to lukewarm response) may know where I'm headed with this, because I love a good pattern almost as much as I love the Spurs. Teams, like people, have personalities, and regularly do things in a certain way. And since Manu Ginobili joined the Spurs in 2002-03, the post-season for every championship they've won has begun with a loss in Game One of their first playoff series.

It all began when Stephon Marbury's buzzer beating 3-pointer in overtime put the Phoenix Suns up by one point, and 1-0 in the series. The Spurs won 4 of the next five games to take the series, then they proceeded to lose game one of the Western Conference Finals to the Dallas Mavericks before again prevailing in six games, on their way to the franchise's second NBA championship.

In 2005, it was Andre Miller's 31 points that helped the Denver Nuggets stun the Spurs by 6 in Game One of the first round. Unfortunately for Carmelo and company, that was their only win of the playoffs. San Antonio took the next 4 and never trailed in a series the rest of their way to ring number 3 for Tim Duncan, which they captured against the Detroit Pistons in a tightly-contested seven game series.

Déjà vu was in full effect for 2007 when San Antonio's first round oppenent, again the Nuggets, stole Game One on the Spurs' home court by six points. This time it was Allen Iverson and Carmelo Anthony who did the damage by combining for 61 points in what was, once again, Denver's only win of the series. The Spurs would only drop 3 more games the rest of the playoffs, and ended with a sweep of the Cleveland Cavaliers for championship number four.

This isn't to say that dropping the initial game of the playoffs is an immediate omen of a Larry O'Brien trophy coming to the Alamo city. It's just that the Spurs have never won it all in a year (2001, 2002, 2004, 2006, and 2008) when they have managed to win their 83rd game of the season. And for those who, like me, are fascinated by an intriguing sequence, there are the years of 2000 and 2009, when injuries to Duncan and Ginobili respectively, threw the team off its stride even though they dropped Game One to their first playoff foe. 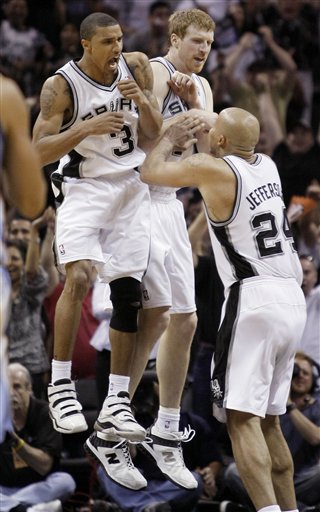 One thing I will not debate, however, is those magical Championship years that weren't shortened by a lockout. Each of those glorious postseason runs began in the same way that Sunday's game went: right down the tubes with an unpleasant sound, and an even worse feeling that remained ... well, it remained as long as it took me to remember that this year could still qualify for a wonderful historical categorization. It could join '03, '05, and '07 as yet another odd-numbered year that the Spurs won it all after starting with a thud.