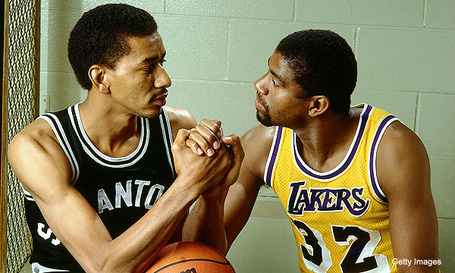 "Can we really arm wrestle with our elbows on the ball?"

It's Spurs versus Lakers! On TNT! This should be awesome! Charles Barkley is an idiot! Amirite? On the last one, I'm pretty sure.

Err... maybe 9 seasons out of 10, you would be correct that Spurs-Lakers is a barn burner. Unfortunately, this will probably be the 1 in 10 since the race for homecourt throughout the Western Conference bracket of the playoffs has ratcheted up like Mozart's Symphony 41 in C major making those inevitable twisting turns, only to end with the frustrating whimper similar to Charlotte Church's highly irritating but once promising career.

Gregg Popovich, ever so stealthy and masterful of the deceptive arts, orchestrated a shocking 6-game losing slide previously unheard of in the Tim Duncan era to make things interesting but ultimately to get his team under the radar again. But then Phil Jackson, sensing his old buddy's mind tricks as well as he can read into Kobe's seething anger at all things nice and pure, raises Pop his own five-game losing streak that puts us into the present situation. The Lakers have no chance to catch the Spurs, but are in a freefall towards the 4th seed if things don't turn around quickly. Will the Spurs play the perennial springboard that will launch the Lakeshow back to success, or will the Silver & Black flip the bird and add more pain to a team that has collectively withstood Kobe's pinkie problems to win back-to-back titles?

You see, that's the only thing that excites me in this game, and I don't expect too many fireworks, if at all.

I had a conversation with jollyrogerwilco sometime ago about me returning to make those long-ass previews I've sorta made a career out of in PtR, and I thought, yeah why not. I sorta missed doing those. I signed up for this Lakers preview two weeks early because 1) it's Hollywood and what better way to capitalize on it than to bust out a 'chop-filled prelude to a supposedly epic game with major playoff implications (before LA screwed their end of the bargain with that losing streak); and 2) I thought the two-week period will give me enough time to gather ideas, write the post and make the 'chops despite my fingers constantly threatening to go all carpal tunnel on me.

But then life happens, you know, and instead of having something, now I got nothing but the same old preview, a hack job if you will, although I set up a poll to help soften my self-disappointment.

PG: Parker will dominate Fisher That is all.

SG: This is basically the only matchup where Manu doesn't get a Spur all year long.

SF: Artest is playing much better despite all the flexing, bicep-kissing and senseless tweeting, while RJ is slowly upping his game in time for the playoffs.

PF: Maybe another game-winning tip-in can work? I'd rather the old man Dice save it for the playoffs. Meanwhile, Pau is a very skilled beast.

C: The old man's still got it. Yes, I realize Bynum is physically monstrous, but Timmeh still has enough tricks up his sleeve to win this one.

If not for playing on the same team as Cubits, the Nailgun might be a 6th man of the year candidate. I'm expecting Pop to play the bench a lot in this one, and winning would just be icing on the cake.

Now that Jerry Sloan is retired, Phil is the only coach other than Pop that will ever get a spur here. Maybe Thibodeau, if his success continues for another few years.

We need some revenge after that home beating the Spurs took from the Lakers, but I guess Pop has already planned ahead to rest players rather than go all-out. Still, a win would be nice.

The mojo is... either dead or alive. Your call.

Spurs starters get a breather, but role players still push the Lakers to the limit in a narrow Spurs loss. (yes, you can burn me at the stake now)

Keys to the Game

Project Spurs - The original Spurs podcast can be found here, as well as some other good features.

Spurs Nation - The Express-News' Spurs blog, where usually the most inside info can be found.

This game will be airing nationwide in the US on TNT. The rest of you, check your local listings or see below.