Share All sharing options for: Game #75 Recap: Boston out executes the Spurs

I just lost my huge recap that was full of insight and analysis. It was awesome and now it's gone. So instead of that wonderful write up you're going to get this...and you're going to like it!

San Antonio has done it. They have made the fans go from super confident and thinking of titles to wondering if they can make it out of the 1st round. Ok, that might be an overstatement, but last nights game was supposed to be the glorious return of the real Big 3. Instead the Spurs got out executed and more importantly got beat for the fifth straight time. Something that hasn't happened since 1997.

The Spurs came out of the gate and looked solid. The Celtics leaned on Pierce in the first quarter and he kept Boston close. Something I've noticed about the Spurs. They don't have THAT guy. The guy who's not the nice guy. A guy that will not take all the crap that the Celtics dish out. Does that matter? Probably not, but we shall see.

Tim Duncan is a beast. He is better than Keven Garnet and appears that he always will be. The only folks who won't admit that fact of life are either Boston fans or disillusioned by KG's yelling prowess. Duncan came out strong and didn't look back. My only complaint of him was the 5 turnovers. A little rusty, maybe? 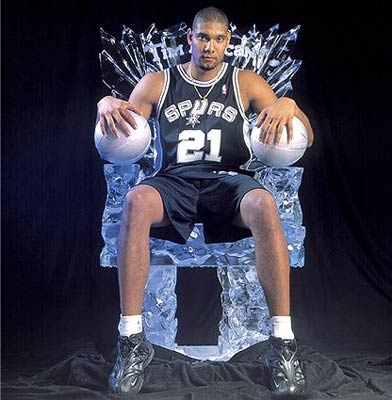 Despite looking good early the Spurs cannot separate themselves from the Celtics and thus end up battling for a lead going into half time. San Antonio's 2nd unit is looking a bit overwhelmed of late. I think this fact is attributable to the fact the Antonio McDyess is now in the starting lineup. There's no doubt that Dice helps the starting lineup, but does he help it enough to over come how much it takes away from the bench? I don't think so. I'm going to say it. Pop, it's time to either put DeJuan Blair back in the starting lineup or get Tiago Splitter on the floor with the 2nd unit. The defense can't handle Blair and Matt Bonner on the floor together that much.

Tied at half and the Spurs are lucky that it is. Now it's time to cue the ever so popular Third Quarter Collapse. The quarter started out so promising with a couple made baskets and nice defense and then it all went down the crapper. Turnovers and bad defense started it off. Then the Spurs decided it was a good time to not make any, and I'm barely exaggerating when I say any, of their open shots. Boston also picked the 2nd half to go ahead and shoot 63%. They couldn't miss, I think they even tried just to see if it was possible and the shot went in anyway. 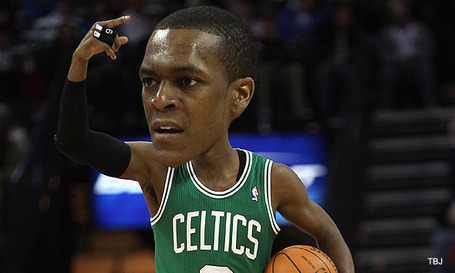 The literal size of Rondo's head after the Spurs make him look like the best shooter...ever.

The Spurs traded baskets in the fourth and despite a stellar effort from Duncan couldn't get any closer than 6 in the final frame. Poor rotations, turnovers, soft rebounding and a complete inability to hit open looks doomed the Spurs. It was as if they just weren't focused for this game. The role players looked like they thought the Big 3 were going to carry them and the big three looked like they were going to for a while. With a team as good as Boston everybody has got to contribute and that did not happen last night.

So what's the silver lining here? Well, it's clear that the Spurs can still get open looks against a really good defense. They shot 27.6% from downtown. If that is closer the 40% they have a chance to win. San Antonio only attempted 14 free throws, which shows a lack of agression. This team will not give up 63% shooting in a 2nd half very often. Nor will they shoot such a low percentage. It was an off night for Manu and basically all of the shooters. Boston hit their shots and hit them often. This team is still good, but they need to relax and get back to playing the free flowing style that got them those 55 wins. Think about this, the Spurs have dropped 5 in a row, and yet they still have a 2.5 game lead for THE best record. All is not lost.

- Blair needs to learn to stop playing like Franciso Ellison. This weak stuff around the rim has got to go. Somebody needs to teach him the pump fake, one power dribble and finish with authority. Splitter could use the power move as well.

- I think Rajon Rondo is a ventriloquist, he doesn't move his lips when he's in an interview.

- Jefferson played well on defense. Pierce didn't do much after the 1st quarter. Still, I'd like to see a bit more from Rage on the offensive side of things.

- How did a Hall of Fame Celtic get to call a Boston game? McHale has been posative about the Spurs, but he's rooting for the Celtics. Ok, he wasn't that bad, but it was hard to deal with at points.

- Let's hope Dice isn't really hurt. I was very glad to see him back in the game.

- Only one player from the Spurs had a positive in the +/- rating. It was Matt Bonner with +1

- The Spurs shot 29 three pointers. Did Stan Van Gundy get on the Spurs staff when I wasn't looking?