So the Spurs are trying to recover from a really ugly loss to the Lakers on Sunday. The Spurs had plenty of time to think about that loss with two days off. They finally get back on the court to face the hapless Pistons. I wrote my thoughts as the game was going on so you'll get an edited version of my thoughts during the game. Let's get right into the action. 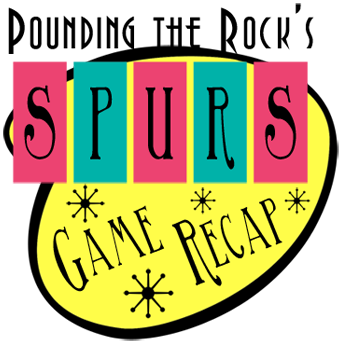 San Antonio McDyess got the start in his 1000th game. Fitting that it comes against the Pistons.

Spurs jump out to an 14-2 lead on 7-7 shooting. Time out. Good ball movement to start the game. Manu just made a block that went 20 feet into the air. Pistons get the lead down to 18-12 on some bad defense and poor rotation. Pop calls a time out. Spurs jump back out to a 29-15 after the time out. Spurs have yet to miss. McDyess sits and gets a big hand. RJ miss first shot of the night for the Spurs. 14-14 to start the game. Spurs go crazy and score 40 in the first quarter and lead by 16.

Manu has 9 points, Tony has 7, Duncan has 8, RJ gets 8. The team is playing like a team. Great ball movement and making open shots, but also pressing the action with Parker and Ginobilli. Duncan looking spry. The focus is there and while the defense hasn't been great, it hasn't needed to be.

Bonner comes out hits a perfect corner three off a nice cut to open up the floor by Blair. Pop gets a VERY VERY cheap tech on a bad call by the refs. Pistons miss the free-throw. Sean Elliott: "Ball don't lie". Manu just made a ridiculous move and a fade away. He just crossed over between his legs while stepping over the leg of the trapping defender and then steps back and hits the fade. That guy is magic. He's like Lionel Messi with a basketball. 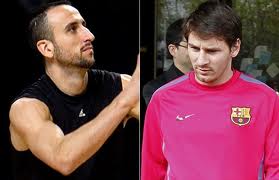 There must be something in the water down there.

The teams are trading baskets at this point. The offense is a little less sharp with a couple offensive fouls. Matt Bonner now has two baskets inside the 3-point line, what is going on? The Pistons are getting frustrated as the Spurs push the lead to 18. Elliott is saying, and I agree, the Pistons are playing lazy. Charlie Villanueva picked up 3 fouls in less than 30 seconds of game time all in one Spurs possession

George Hill, Gary Neal, Dice, Blair and Anderson are playing sloppy as a unit. There's Parker right back in for Hill. Hill still needs practice at running a unit by himself. He just seems unsure of himself when it falls to him to get the guys running a good set. Anderson just tried to go one on one against T-Mac and had a shot clock violation. Bad ball movement. Anderson needs more playing time for sure. He just made up for it with a very nice pass to Parker underneath the basket. Neal set that up nicely.

Rage is playing much better today than on Sunday. He's taking open shots and since he made couple he can drive and get to the rim. An agressive Peanut is much better for this team. I really he hopes he realizes that little fact. Spurs end the half slopply and only up 15 points. Still a pretty dominating first half. Spurs shoot 80% in the first half. Duncan leads the way with 12 points and 8 boards. Parker has 10 points, 6 assists and 2 steals. Did you know: When Parker has 7+ assists the Spurs are 28-0! Manu, Neal, Bonner, Dice and Jefferson are all playing well.

I like George Straight. He's a Spurs fan to boot. (Pun intended)

At this point I was hoping the Spurs could push the lead out and get some PT for Splitter, Anderson, Novak and Co. I'd like to see the 2nd and 3rd units to have some more rhythm and get used to not having one of the starters on the floor running things for them.

Spurs start off sloppy giving up a bunch of easy offensive rebounds. I think they just gave up a 4th offensive board of the half less than 3 minutes gone. The focus seems to be lacking as of right now. Lead down to 13. Manu stops the bleeding by drawing a charge on McGrady. Well, after yet another turnover Monroe gets an and one on Duncan.

The lead is down to 10 and something needs to change. The ball movement is awful right now. The fans are just waiting for something good to cheer about. Sheesh, this is ugly. Lots of turn overs and bad defensive rebounding. Manu just sliced in for a nice layup, but McGrady comes right back with a jumper. Pop finally calls a time out. I think the Spurs thought that the Pistons were going to come out and lay down for them. Playing like things for one quarter against a solid team is going to kill this team. The Spurs cannot afford to turn the ball over this much against the Lakers, Mavs and the like.

Matt Bonner just hit a one handed up and under move. That was just silly. The movement is coming back a little bit to the offense. ANOTHER offensive board for the Pistons. This is getting out of hand. Lead down to 7 and Detroit is feeling good about themselves, which is the worse thing you want to see. 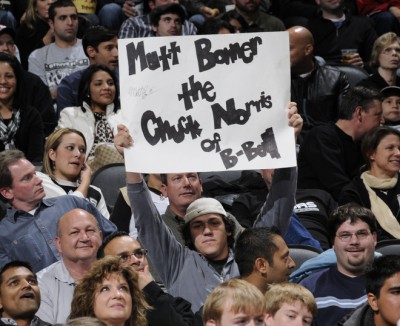 Matt Bonner is the Chuck Norris of basketball, your argument is invalid.

Blair gets a very nice pass from Manu and gets the and one. Blair pushes the lead back up to 13. Some nice defense from Blair and Bonner lead to a Parker tear drop. This is much better. Spurs close out the quarter on a 9-2 run. I have to be honest here, I'm not sure why Splitter hasn't seen the floor. The rebounding problems seem to be a perfect time to see if he could help out the team.

Back and forth. Still a bit sloppy on the defensive side of the ball. This team seems to lose all focus when the lead gets above 15 points. Manu makes a nice play and gets the lead back to 13 points. Finally a good defensive possesion from the Spurs with Neal getting a steal leading to free throws for Hill.

How awesome is the season ticket holder from Austrailia?! Give that guy a gold star. He gives his tickets to the Wounder Warriors when he can't make the game. I need to get into whatever field he's in.

Bonner again with the inside game, he finished with 11 points and only one 3-pointer. Hamilton is scorching us. I've always thought his offensive game was underrated, it seems like he never misses that mid-range shot. I'd be surprised if somebody like New York doesn't go after him this off-season. Monroe just cut the lead to 9. That kid looks good. He's got great feet and nice hands. He'll be good for a long time.

The Pistons will not go away. I've never really felt like this game was in jeporady, the Spurs sure aren't putting it away. The starters are still in with 3 minutes to go in a 10 point game. Detroit gets closer, but Parker may have just sealed the game with his 17th 3-pointer of the season. Let's hope some bench guys can get in and finish this mess off. Wow, Tony comes out of the time out with a very nice layup to more or less seal the deal. 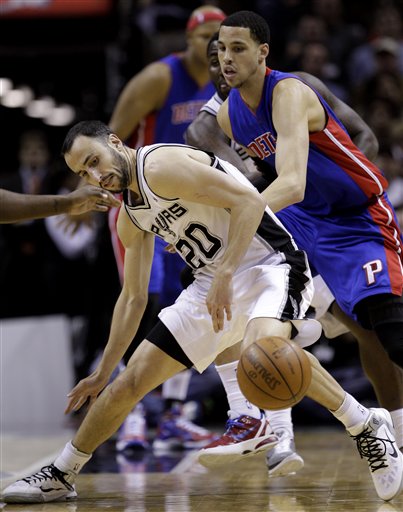 This was not the win I was hoping for. I thought it would be after the first period. When the Spurs move the ball and and get good penetration from Parker and Ginobili they are all but unstoppable on the offensive side of the ball. The Spurs shot a whopping 80% from the field in the first half, but turned the ball over 9 times and only had a 15 point lead at half time.

It clear when this team struggles it's due to a lack of focus. Fortunately, the Spurs are good enough to sleep walk for 3 quarters and still win a game against a average team with a bad self image. The Spurs won only the one quarter after the first and it was only by one point. The defensive rebounding was embarrassing tonight. The Piston actually got more offensive rebounds than defensive rebounds. I'm not sure why Pop didn't get Splitter more burn when it was clear in the 2nd half that they were having trouble keeping Detroit off the offensive glass. Somebody besides Duncan has to rebound.

Some good news. Rage played well, if only for a half. Gary Neal looked good and lead the bench with 15 points. Tim Duncan is still very, very good. Tony and Manu both look good and lead the team. There are lots of negative things to look at in this game, turnovers, bad defensive rebounding, lack of focus, but the bottom line is that the good guys won again. They picked up a game on Dallas and Boston.

Up next: Spurs will host the Kings on Friday night.