Note: Two writers wrote for this game. I've combined the two. Give props to both writers. -Josh

Howdy, Pounders. I know it feels like the last game was approximately 60 years ago. We have had too much time to think of the epicfailurecollapsedisaster that was the last home game. Word on the street is that the Spurs had a pretty hard practice the day after. I do not envy the Pistons. (Well, maybe the paycheck, but not the cars. I do not like 22 inch chrome wheels. Its so...Fifty Cent)

The Spurs look to -feel better about themselves by summarily destroying the hapless Pistons- rebound from Sunday’s embarrassment by taking on Detroit. The quest for (Roman) numeral LII, after the jump.

The one time the Spurs have a bad loss, the schedule makers decide it'd be good for them to have two days to wallow in it. I hate the schedule makers. I'm glad to finally be able to start looking at a game that isn't "the game that shall not be mentioned". The Spurs got it handed to them on Sunday and will looking to bounce back and feel better about themsleves, not to mention help all the fans stay off the hard stuff for one night.

The good news? The Pistons are coming to town. The poor Pistons went from having a bad season to a horrible one when part of their lineup decided mutiny was a good option. Seems to me, that's not the best way to get playing time, but then again, I'm not playing in the NBA and they are. I knew I should have just been a tall athletic guy who ignored authority. Man, talk about bad career choices.

Some music for your enjoyment:

Now, I know what you're thinking, "Big50 don't go upsetting the guy from Detroit that loves that place so much he lives in Florida again." I wasn't planning on it. In fact, I didn't even mean to upset him the first time. Detroit is a fine place to be from: 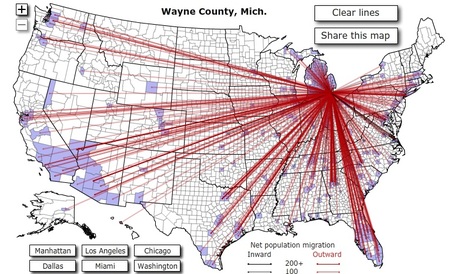 I'm just kidding. I'm sure the fine people of the Motor City are good hard working American's just like the rest of us. And I'm sure they're overjoyed to have Slim Shady as their most prominent city figure these days.

alamobro PG: Parker needs to dominate Fisher. Stuckey had alot of potential at one point. Parker is potential realized.
Big50 PG: Parker needs to dominate Fisher. He'll also want to dominante T-Mac, Stuckey or whoever the Pistons decide to start and play at the PG spot. Tony has been money since he's been back. I'd love to see him use games like this to get into a solid rythme for the rest of year and into the playoffs.

alamobro SG: T-Mac used to be one of those "next Jordan" guys. He is now old and going up against the "Current Manu Ginobili" guy, who probably cant wait to take his frustrations out on the first oppenent he sees. Sorry, T-Mac, but you will be the first thing Manu sees tonight.
Big50 SG: Hamilton, Stuckey and Gordon are matched up against The Sickness. I don't know what to say here really. Those three guys are getting paid a lot of money to not be very good and Manu is paid less money to be...well, money. I wouldn't mind seeing Gino go into dominate mode again for...let's say, the next 4 months. Sound good?

alamobro SF: I wish Pop ran more plays for Richard, It seems he gets fouled 75% of the time he takes it to the hoop. Tay is not that old, but he is damaged.
Big50 SF: Prince vs. Princess Peanut. Jefferson isn't blowing anybody away with his play of late, but he has been solid and that's better than last year. Prince has been having a good year...for him. RJ was able to win this match up last go around and I see that happening again.

alamobro PF: I don't know a damn thing about Chris Wilcox, but I do know he should not get in the way of Blair tonight.
Big50 PF: Blair needs to show something to me. He's been off a bit lately and I'd like to see him come out and play really well. Reports were that he was not very happy after the Sunday game. Let's see if he can take that loss and turn into something positive.

alamobro C: Monroe should try to keep Duncan from getting a double double tonight. Tall task.
Big50 C: Duncan will not win this match up by being more athletic that his opponent, but let's be real, he hasn't done that with any opponent in well, probably the last decade. Duncan will win it with BBIQ and wily veteran ways. I'm assuming Wilcox is getting the start here.

Alamobro: The Spurs have the B.A.M. The Pistons bench isn't actually too bad, in fact some of these guys could start for another team. They have Charlie Villanueva, Rip Hamilton, Will Bynum and a few other serviceable pieces. In fact, It makes me wonder why they are so bad this year.
Big50: The last time I did a preview for a Spurs/Pistons game I was a tad worried about their bench. Turns out that Will Bynum decided to torch the Spurs for 21 points, to lead his team. Their bench out scored their starters in that game. I think our bench is a little better than it was then so I look for better play this go around from our guys. Bonner, Hill and Neal should all have impacts.

alamobro: When Pop says "Jump", his squad asks "How high, SIR ?!" John Kuester can't get his guys to make it to shoot around.
Big50: John Kuester is apparently a very unlikeable guy according to his players. Of course Pop should be fired, so, yeah.

alamobro: So far, the Pistons don't have anything on the Spurs. Its not staring here, either.
Big50: Spurs will be motivated after two, almost three, days to steep in the loss that occurred on Sunday. The Pistons will probably be trying to forget this season as they have only won 4 games since they last played the Spurs.

alamobro: Clue: Its not Detroit
Big50: Spurs still have San Antonio McDyess, the Pistons do not.

alamobro: San Antonio is coming off of maybe they're worst loss of the year against they're biggest adversary. They are going to treat the Pistons like a rental-Kia.
Big50: Spurs win by double digits.

alamobro Key 1 - Detroit should try to lose by no more than 10, then they can consider themselves blessed.

Key 1 - 3 pointers. We make 'em, we win. We miss 'em, Sunday happens. The Pistons are a very good 3-point shooting team and defend the 3 pretty well too.

Key 2 - Bench Play. The Spurs bench was solid against LA and they should be able to continue playing well, but will face a good Detroit bench. Pistons have a lot of offensive punch coming off of their bench as noted above.

Project Spurs - Don't know too much about this place.

Please don't post links to illegal game feeds in the game thread. Links to illegal feeds are not permitted on SBNation. If you do post an illegal link , I will personally find you, tar and feather you, then toss you to Debeast. However,you can probably find them out there on the internets if you're resourceful and desperate. You can also shoot an email to poundingtherockmail@yahoo.com(IMPORTANT: Please include your PtR username in the email for reference, along with a viable credit card number, name, address and social) for further assistance.