Markets are driven by one thing: eyeballs. How many they consist of, and how many they can deliver. When market size is considered, it's NOT the size or population of the city that's the most important aspect, and it's certainly not the size of the state. Seems like nearly every time the Spurs play Los Angeles, this question comes up. So, for anyone who's ever wondered just why San Antonio is considered a small market team: this post is for you.

When considering the size of a market, the first error many make is looking up the population of the city on a chart. This mistake leads to statements like, "Check out this link which clearly shows that San Antonio is the seventh most populated city in the United States! Who's the small market now, huh?"

The way that corporations, advertisers, and marketers look at the country is quite different than a simple view of how many people live in the city limits of an individual municipality. You can start to see this difference when looking at this list of the largest US markets. When comparing the two lists, they seem quite similar until become confused by Atlanta. How can it be number 33 on the list of cities, while being simultaneously listed as the nation’s 9th largest market?

Before I answer that question, I’ll point out a couple of other interesting jumps up the market list that can help explain what’s going on. The number 12 market in the US is Tampa-St. Petersburg, even though Tampa is 54th, and St Petersburg is 77th on the list of cities. Also, Houston, the 4th most populous city but 10th largest market, is eclipsed by Dallas-Fort Worth 7th biggest market, but 9th and 17th on the cities list. So it becomes a bit more obvious that a market is an area, and not a city or a community. Markets sprawl, and cross over lines of incorporation, greater metropolitan areas, and zip/area codes. They unify regions of population that have nothing else in common but proximity.

Which explains how San Antonio only ranks two spots higher than Grand Rapids-Kalamazoo, and two spots LOWER than Greenville-Spartanburg, Asheville, Anderson, SC (none of which even rank on the cities list.) San Antonio is the most populated city in the US that has only one professional team for this reason: outside the city proper the population density drops off the charts. 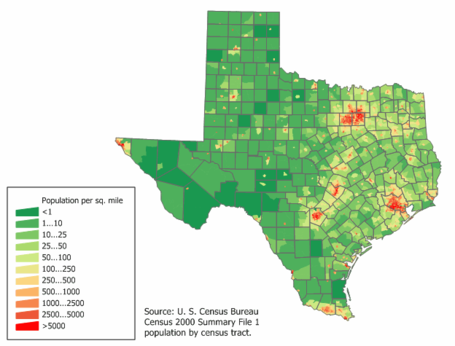 And that, dear readers is why San Antonio is a small market, and Dallas is large one. Look at DFW's patch of red on the above image. Them's a bonch of people livin' out there, I'm tellin' ya. And Spurs-town, well let's just say that there's no such thing as the San Antonio Major Metropolitan Area, and there may never be.