Share All sharing options for: Number 12 - Back on the Court

The 10-day contract in the NBA is a tale of two views. One of an unknown garbage-time player receiving little fanfare from the fan base. The other story highlighting someone's golden opportunity to make a dream come true.

The odds are nearly astronomical that a D-League call-up could make enough of an impact within 10 days to earn a permanent spot in an active rotation... but that doesn't mean he can't eventually find his way there. Every player has to make their jump from somewhere; whether it be straight from High School, from overseas, or out of a developmental league - no path is the same. Don't forget that 3-time NBA champion, Bruce Bowen, started his professional career as an undrafted player switching between teams in the French league. Bowen didn't receive his first shot in the NBA until the Miami Heat called - with a 10-day contract. And although Bowen only appeared on the court for a few minutes in that 10-day contract, it was the door that eventually led him to the San Antonio Spurs.

So maybe this is Déjà vu, maybe it isn't. Regardless, there is a new number 12 on the court and Othyus Jeffers is aware of what it takes to earn that elusive NBA contract. 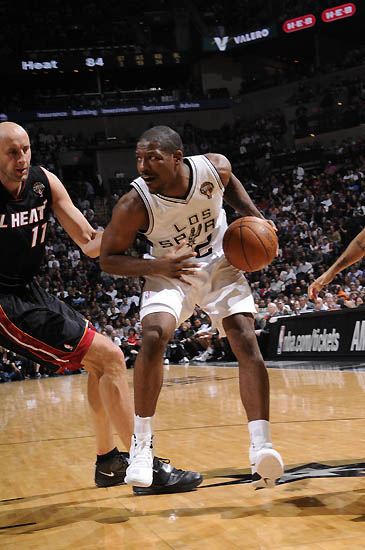 Last season, the Utah Jazz signed the Chicago-born guard after offering two back-to-back 10-day contracts. Jeffers finished out the 2009-2010 season with the Jazz where he averaged 2.6 PPG in 5.2 MPG but wasn't able to survive the Jazz's final roster pre-season cuts this year.

Jeffers returned to the D-League where he leads the Iowa Energy in scoring with 21.2 PPG (3rd best in the D-League) and all D-League guards with 9 RPG. Hardly any D-League call-up for the Spurs has ever been asked (or expected) to score a ton of points. No surprise here - Spurs primarily want to take a look at his defensive capabilities. "He's a good defender," Coach Popovich said. "If he gets into a game, we want to see him defend."

Underneath the freshly stamped nameplate bearing his last name, I caught up with Jeffers after the game.

Major thanks to Josh Guyer (completely deck) for transcribing this for me.

Pounding the Rock: First off for Spurs fans who have been trying to figure it out for the past couple of days, how do you pronounce your first name?

PtR: Last year you were a D-League All Star, you received a 10 day contract from the Utah Jazz, and you finished out the season with them. What kind of work did you put in that got you another 10 day contract with the San Antonio Spurs?

OJ: Experience, it’s pretty much that I learned a lot from being with the Jazz organization. They are outstanding people there, they demand respect and they tell you up front what they expect. So I’m back from going through there [the Jazz], and coming here was kind of a relief. I knew I had to approach the team when the time has come. You know, go ahead and work hard and hopefully when the time comes, go in and play ball.

PtR: You mentioned experience. What other assets do you think you could provide a team like the Spurs?

OJ: Defense, energy. [I can] pick it up, push the ball. I’m only here for defensive purposes to relieve some of the guys who’ve been here a long time. We’ve gotta make this big push for the playoffs, so [I’ll] save their legs a little bit, let me run out there and guard a couple of people. Make a couple of shots, just to waste time.

PtR: You haven’t had much time with your teammates or with Coach Pop. Since you got here, what have you been focusing on?

OJ: Well, there are two main sets that the offense pretty much the team runs through. Then they run the other plays off of the sets, so I just learned the basics, and that’s what we ran pretty much at the end of the game. I picked it up pretty quick. Pop believed in me and put me in and we had a good game.

PtR: You played just over 8 minutes tonight against one of the most talked about teams in the NBA. What were some of the things that the Miami Heat brought that make them a tough team?

OJ: [They] attack, they’ve got athletes, they’ve gotta rebound the ball, and if you don’t, they’re a fast breaking team. They do a lot of isolations because they’re so good. We try to keep the thing closed down and show more than one body so they’ll think about it before they try to drive or pull up. The coach did a good scouting job and it paid off. 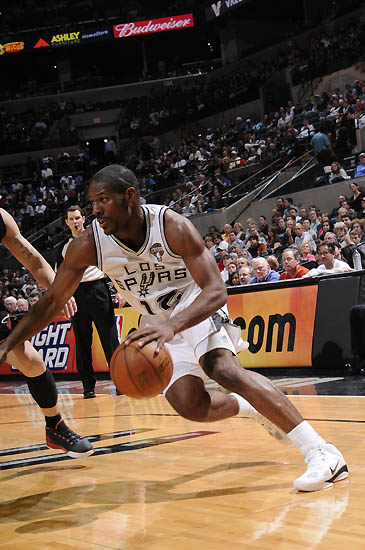