The crowd was buzzing pre-game at the AT&T Center: it was Noche Latina, LeBron was having fun during warmups, Basketball Jesus arrived with a sign saying "Have Faith," a Heat fan stood on the sidelines with a t-shirt saying "Don't Hate" in Heat colors, two guys in pastel tuxedos were behind the Spurs bench courting the ESPN cameras, the Governor was sitting on the front row, David Robinson was wearing a cowboy hat, and Tony Parker was suited up! The atmosphere matched anything I'd seen during the playoffs last year. And to top it all off, the Spurs changed their video introduction, dropping Bon Jovi's "This Is Our House" (but the slogan showed up in the video in the form of a shot of a certain group of Sign Ladies holding up their posters). It was as if San Antonio set out to show a national TV audience how meaningful basketball can be in a small-market town. 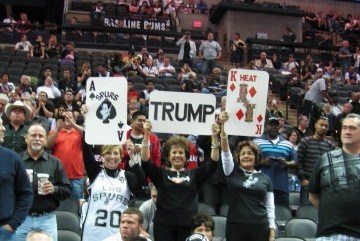 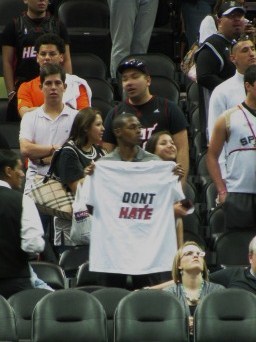 Yes, Tony was back. And for the first time, I really felt like he had won over the hearts of the fans. He was cheered loudly when introduced, and received a rousing standing ovation when he exited the game. And I thought he played one of the best games I have witnessed - very balanced between looking for his own shot and facilitating for his team mates. 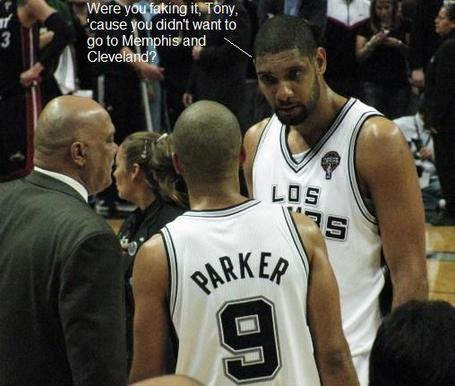 Pop jokingly told the media before the game that Tony's rapid recovery was due to "the foie gras and truffles" treatment. 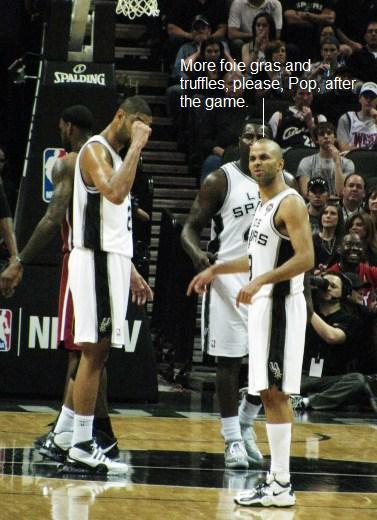 Tony did not forget how to work the refs during his brief rest, but unfortunately went a little far in protesting a call for pushing off, taking a few strong steps in the ref's direction while telling him what he thought of the call. He properly received a technical call for it, even though the proper call by the ref may have been to call a foul on the defender before Tony pushed off. 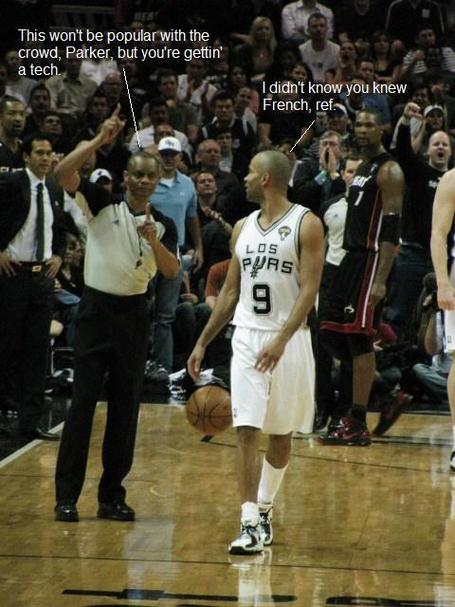 Manu anticipated the opening tip and drove to the basket for an easy layup for the Spurs first score. In this photo you can see that he is the only player moving as the ball is tipped at center court. 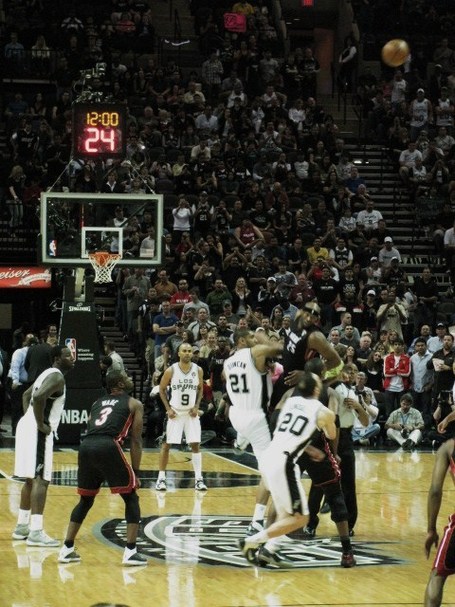 Manu was Manu, hitting three of four three pointers in the first quarter alone. The final two points of his 20 came on this shot early in the fourth quarter. 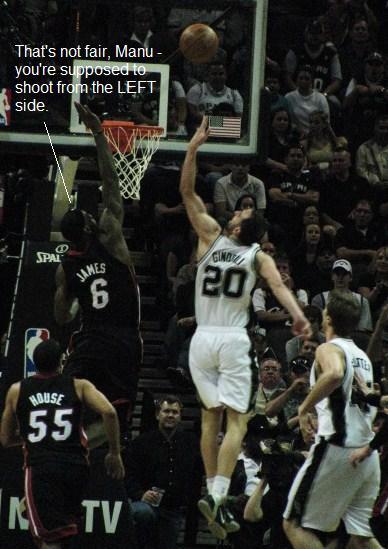 Here Manu scores in the middle of Wade, James, Miller, and Bosh. 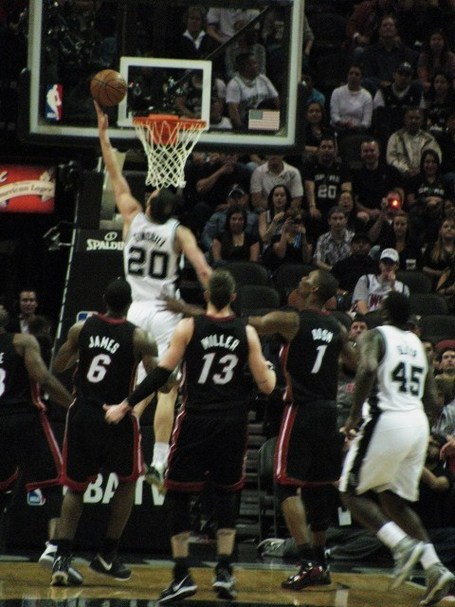 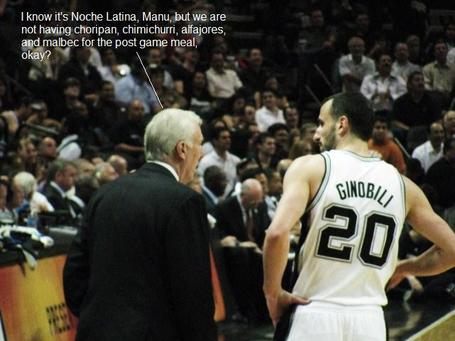 The Spurs put the pedal to the metal in the first quarter and when the exhaust cleared, it was Spurs 36 - Heat 12, and Timmy had declared "Game Over!" 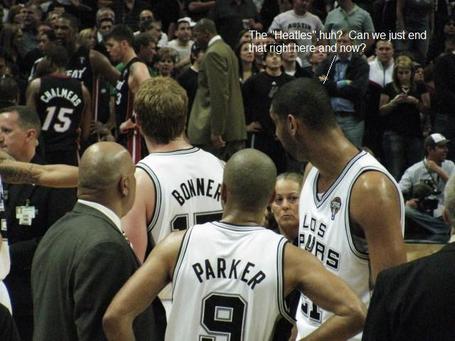 With their team in disarray, LeBron and his coach were left wondering what had happened: 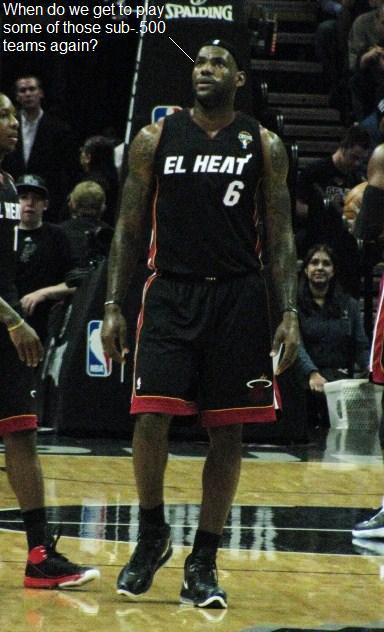 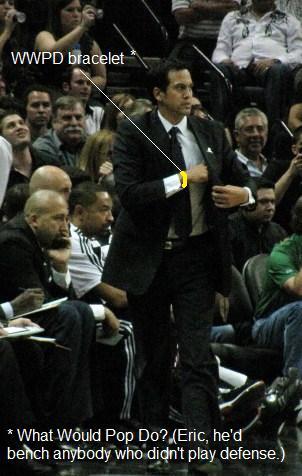 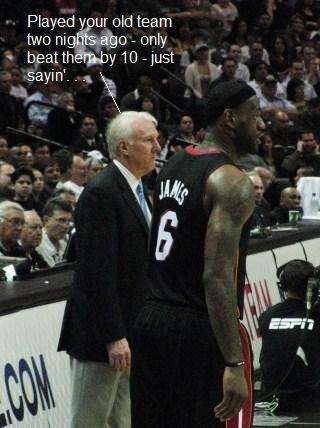 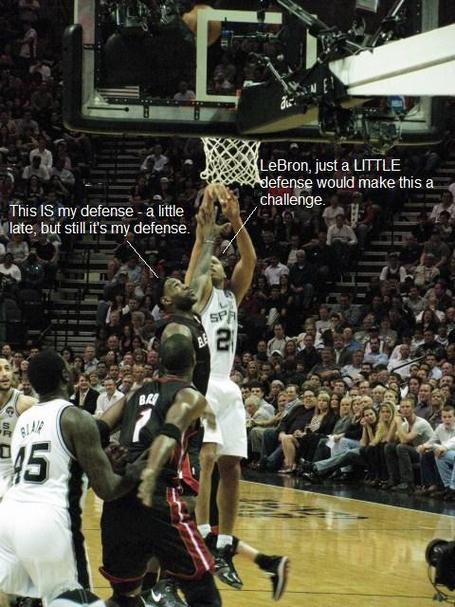 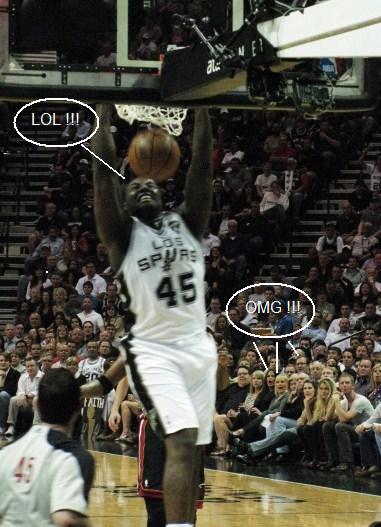 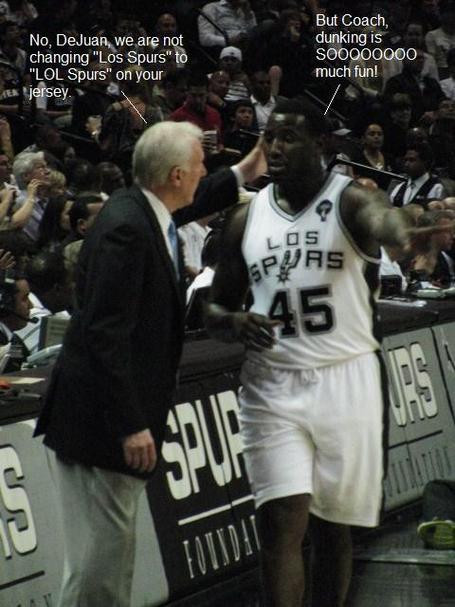 Bonner was simply amazing, hitting 6 of 7 threes to lead the team to a franchise record 17 three pointers for the night. The cold front that cooled off the Heat was bringing a rainstorm of threes with it. 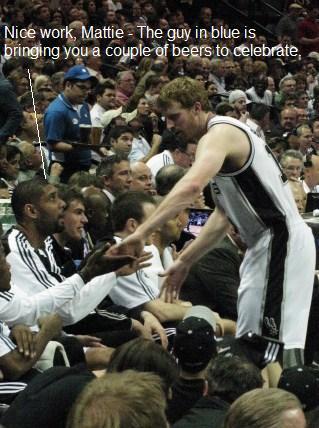 In spite of the great team win by the Spurs, the post-game media coverage still focused more on the Heat's collapse with little credit given to the silver and black for their offensive and defensive complete domination. 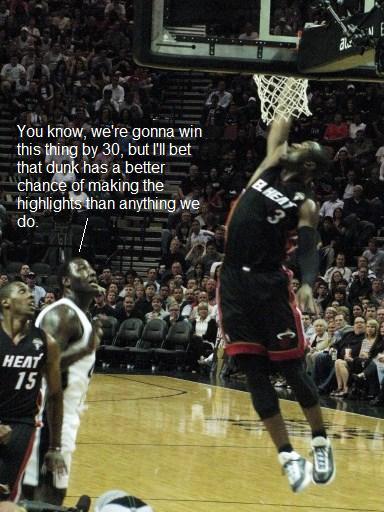 Tiago played 13 minutes, scoring 5 points and grabbing 3 rebounds. His was 1 of 2 from the free-throw line, where he nightly appears to still need some coaching by Chip Engelland to rid himself of a weird hitch in his shot. It must be a Brazilian thing, but whatever it is, it isn't smooth and pretty. 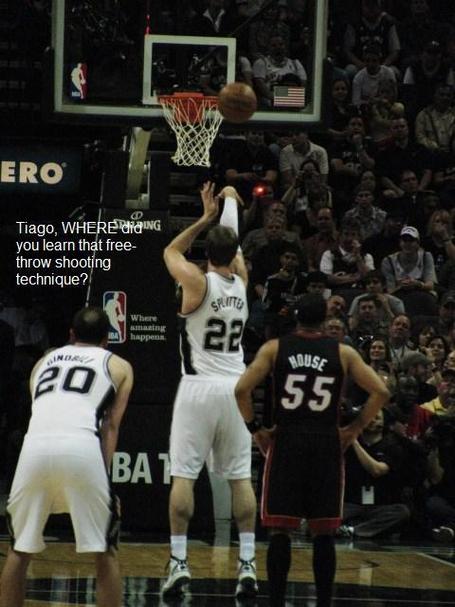 A new Spur joined the team tonight - meet Othyus Jeffers, modeling the Los Spurs warmups. Thanks to Jeff McDonald of the SA Express for the inspiration for the caption. 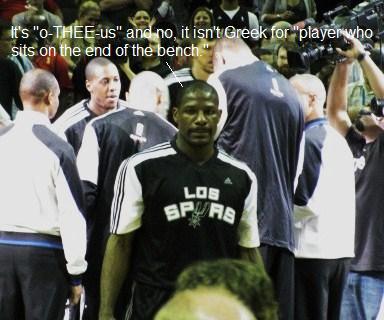 Finally, Timmy had more fun than a kid on Christmas morning during this game. He smiled, laughed, and joked with teammates all during the game. 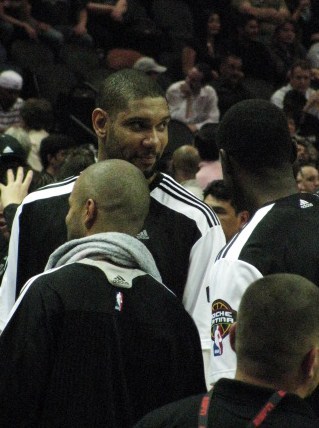 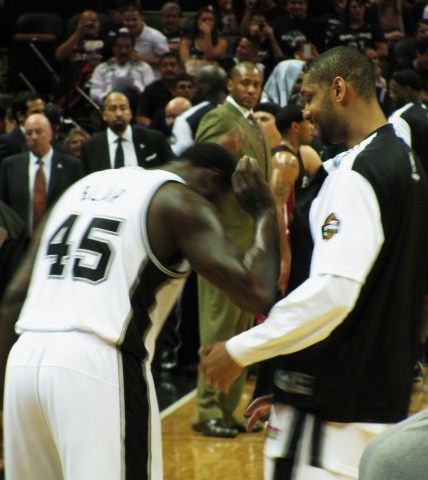