TWSS: PtR Edition - With a Side of Goodies

Share All sharing options for: TWSS: PtR Edition - With a Side of Goodies

So it's been awhile since I did one of these, but the big boss man said "Do a TWSS post or else." If you haven't met JRW, just know that you don't want to see what "or else" is. So I'm doing what I'm told, and I'm happy about it! I'm kidding, but let's take a look at what the £'ers have been up to and a glance at the rest of the Spurs world while we're at it.:

That stands for This Week in San Antonio Spurs.... and well you can read the "basketball" part

Game Recap #62: Spurs sizzling, Heat fizzling in 30-point beatdown - Pounding The Rock
Silverandblack_davis takes a little peak at some history and then gives us a great review of the Spurs dismantling of the Heat.

The NEW Odd-Numbered Year Theory - Pounding The Rock
JRW makes some order out of chaos. Where does this season fit in the Spurs' championship series? The answer will surprise and tantalize with one word: symmetry.

Home! Sweet Home! - Pounding The Rock
Hirschof takes a look at the atmosphere of the first @Spurs home game after road trip. 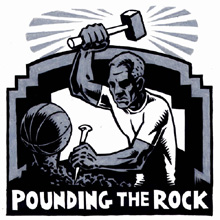 Photos - Spurs' Aces Top Heat's Kings - Pounding The Rock
janieannie gives us a view from the stands of the Heat and Spurs game Friday night.

Spurs International Update: February 2011 - Pounding The Rock
Tim C. gives us an update on all the Spurs draftees and some former Spurs playing around the globe.

BJ Wonders: Final Stretch - Pounding The Rock
bj1ders takes a look at the Spurs and how things shape up after the All-Star break.

Random Thoughts from my Trip to Post-LeBron Cleveland - Pounding The Rock
PtR regular GMac 14 shares his experiences after watching Spurs @ Cavs last night. Lots of great tidbits in this one. And a good ending.

What's in a Name? - Pounding The Rock - What the story behind your username on PtR? Hirschof tells his and wants to hear yours.

King of the Hill, but Storm in the Distance. - Pounding The Rock
Spurs Yoda takes a look at the Mavericks chances of catching the Spurs for the top seed in the West.

Catch Y'all on the Flip Side - Pounding The Rock
AirForceAggie2010 bids us all a fond farewell as he heads off to basic training. 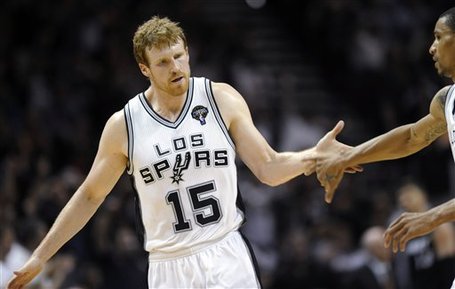 Matt Bonner gives all the £'ers a five for the good stuff
via cdn1.sbnation.com

Other pieces from around the interwebs

HoopsHype.com NBA Blogs - Jorge Sierra " Manu Ginobili: "I would not like to play for another team"

Winners Prosper: The Case For Manu | Hardwood Paroxysm
The shocking exclusion of Reggie Miller from the forthcoming 2011 Hall of Fame ballot left us with a flurry of questions – not the least of which being,

Spurs Stats | The Impact of the Fan
Could it really be that the fans impact home court advantage? Although it seems like a myth, statistics seems to indicate that fan involvement is significant. 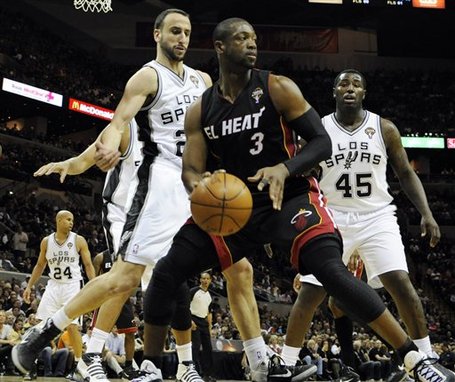 "Black and SIlver" by 15Five Da Army Let's promote this video and song as much as we can! - Pounding The Rock
Your best source for quality San Antonio Spurs news, rumors, analysis, stats and scores from the fan perspective.

Chris Bosh Left In Hot Car For Hours By Heat Teammates | The Onion Sports Network
Full coverage of this story, Tuesday 8/7c on Comedy Central. Heat superstars Dwyane Wade and LeBron James are being accused of neglecting overlooked power forward Chris Bosh by leaving him in a locked car with the windows rolled up while they partied at a nightclub for hours.

As the catalyst, Manu Ginobili offers the Heat a lesson in chemistry
Team chemistry or talent? Catalysts or reactants? Ever since South Beach became the place to take one's talents to, the question facing the Miami Heat has been