Interview with Will and Gloria Drash: #1 Spurs Fans

Share All sharing options for: Interview with Will and Gloria Drash: #1 Spurs Fans

If you have had the fortune of attending a Spurs home game within the last two decades, chances are you witnessed all of the major staples of a Spurs home game - The Coyote, the dot race, the doughnut drop, maybe a bat or two, and Will and Gloria Drash chatting it up court side.

In case you're lost on that last part... take the jump and, more likely than not, you'll know who I am talking about.

Will and Gloria Drash are owners of Eagle Drilling Inc., die-hard Spurs fans, and have been season ticket holders for the last 19 seasons. They love to be involved with the Spurs organization, including going as Mr. and Mrs. Claus for Spurs Christmas events, and are major contributors at Spurs charity events. Well loved by players, staff, and fans, Will and Gloria can easily be seen before every home game talking with just about everybody. George Hill even calls them his grandparents.

I sat down with Mr. and Mrs. Claus Drash before Monday's game against the Portland Trailblazers. 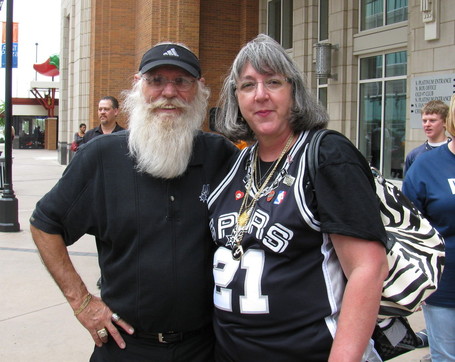 Pounding the Rock: How long have the both of you been Spurs season ticket holders?

PtR: What made you want to become season ticket holders?

Gloria Drash: We have missed some…

Will: When I had my heart attack.

Gloria: Very occasionally. We may miss one or two games but we normally make the majority of the games.

PtR: Do you sometimes go on the road to watch the Spurs?

Will: We’ve been to Washington, Seattle…

PtR: Feels like you’ve been to every arena. What do you think makes the Spurs franchise so unique?

Gloria: Oh, Golden State and L.A. We did the Clippers at L.A. but not the Lakers. (laughs) I think it’s the atmosphere or the people. I find that our fans are very friendly. Even though we have other fans that may come in for their team, depending on who ever we’re playing, and our fans may harass them a little bit but they do it in a jokingly manner and stuff like that to have fun. I think, overall, our fans are wonderful people and enjoy the game of basketball.

PtR: Earlier you told me that George Hill is your grandson.

PtR: Is it safe to say he is your favorite Spurs player of all time?

Will: Not all time.

Gloria: And the reason I am a Tim Duncan fan? He was born on my birthday (April 25th). We do like all the players though. We may have a favorite but normally I wear a Tim Duncan jersey because when we found [that we share birthdays] he just became my player. We love David Robinson and [Will] used to wear Bruce’s [jersey]. We like em’ all.

Will: We have all of the jerseys.

Gloria: I was actually harassed by other family members [because] I always wore Tim Duncan’s jersey and no one else’s. So now I wear a Tony Parker jersey just to please a few people. 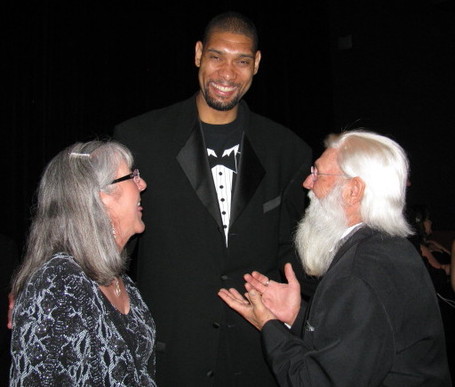 PtR: So the players come over to talk to you quite a bit?

Will: They all know us. But they know also that we don’t intervene when they’re practicing, we just sit there. They’ll come up to us before we can go up to them.

Gloria: We let them do their warm-ups…

Gloria: He has to get his "good luck" warm-up hug.

Will: I shake his hand and get a hug too.

PtR: Ever have the chance to talk to Coach Pop?

Gloria: Yes, we have spoken to Coach Popovich. Actually, a couple years ago… um, actually it was last year. We were high-fiving the players as they were introduced and I just happened to be looking around, not looking for anybody – just looking around. Pop was sitting on the bench and he said, "Gloria, George is over there." And I’m like, "Ok, Pop! Thanks!"

Will: He thinks we’re George’s grandparents too.

Gloria: He thought I was looking for George because he was going to be a starter when normally he wasn’t a starter.

PtR: George coming out to practice, is that the best part of game day for you?

Will: Right now, it’s my favorite.

Gloria: Yeah. We enjoy seeing all the guys warm-up but knowing George is gonna come out, warm-up, get a "good luck" hug. Seeing all these people see that he does this with us, it does brighten up our day.

PtR: In the 19 seasons you have been season ticket holders, what has been your favorite memory?

Will: Well, we took a few trips on their airplane with the players so there is that. Kind of hard to say what is our favorite but that was pretty nice.

Gloria: I guess the first trip we took on the airplane was a package we purchased the package at Tux and Tennies, their annual fund raiser. We were the high bidder on the package which included front row playoff seats and to go the first playoff game, to whatever city, with the players. That was a very nice experience. The first thing I enjoyed, and I know a lot of people say this, but the Memorial Day Miracle to help get us to our first championship. That was my first one.

Will: But my favorite thing, being a season ticket holder and doing all the stuff we do, was last year when we got to swim with the beluga whales at Sea World with Tim Duncan. 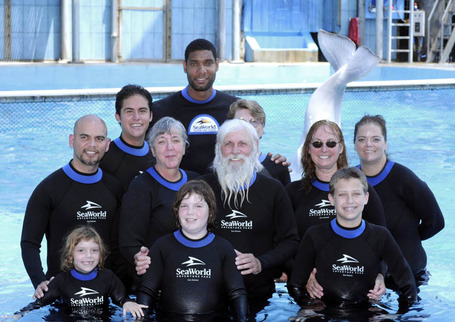 PtR: Did you win that?

Will: We won that.

Gloria: That was something we bid on at Tux and Tennies and we were the high bidder.

Will: We brought 8 people with us.

Gloria: We got to bring people with us and have our own little private swim with the beluga with Tim Duncan joining us.

PtR: The website that I work with is fan driven. By fans, for fans. For those local and worldwide, do you have a message for Spurs fans?

I also had the pleasure of chatting with Will for several minutes after the interview. We covered quite a few topics in relatively short period of time; everything from the professionalism of the players to Gloria's "harassment" for wearing the wrong jersey (if I am not mistaken, by one of Tony Parker's brothers). I later commented that it seemed that they knew everyone in San Antonio. "No, but everyone knows us", said Will. Not too long after that, several members of DeJuan Blair's family took a big detour to lovingly pat Will's shoulders while en route to their seats. Will shook my hand again and left to go join Gloria who was sitting baseline, already talking with several other people.

Beaten to the punch: I discovered this post from the Spurs website (dated April 2009) after my sit down with Will and Gloria.