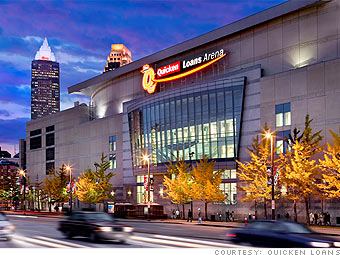 My uncle has season tickets for the Cavs, so before the season I made sure to get this game set aside for me to watch the Silver and Black play. I did this before I realized it was the SEGABABA and that the rest of the week had the Spurs playing the Heat and Lakers. And of course this was before the Cavs lost their entire starting lineup from last season and Tony got hurt. But regardless of how much PT Chris Quinn was going to get, my wife and I made the 40 minute drive up to Cleveland to watch our beloved Spurs play.

This is not going to be a recap (I don't want to take away from the great recap that's already up on the home page), but just some random thoughts I took away from the game. So jump if you want a closer look at the sad story of Cleveland basketball.

- We got to the arena about 45 minutes before gametime. We had good seats. We were right by the Spurs tunnel and were in the 1st row, right behind where all of the floor seats were behind the basket. The first thing we noticed was how many Spurs fans there were. We thought there was a big Spurs section by us, but it was just that all Spurs fans in the lower level had come over to the edge of the tunnel in hopes of getting autographs. But there were still a large amount of Spurs fans all over the arena.

- Bonner and Splitter were the only 2 Spurs still shooting before gametime. Coach Eng was working with Tiago and it was interesting to see all the pregame work he was doing. Bonner left the floor first and signed autographs for a few minutes as he made his way to the locker room, which I thought was pretty cool. Tiago went back a few minutes later, but didn't stop to sign. Funny story about Bonner...as he was coming off the court, there was a reporter filming a segment for the local news. Camera light was on and I don't know if he was live, but it sure looked like it. So Bonner comes strolling over, sees the fans wanting autographs, and just walks up and starts signing. Totally oblivious to the fact he just walked directly in front of the reporter and was basically standing in the shot. All the fans in the area laughed, Bonner realized what he did, turned around and apologized, and everyone had a good laugh. Bonner just seems like a good guy and it was pretty cool to see him stop and acknowledge the Spurs fans who came out for the game. 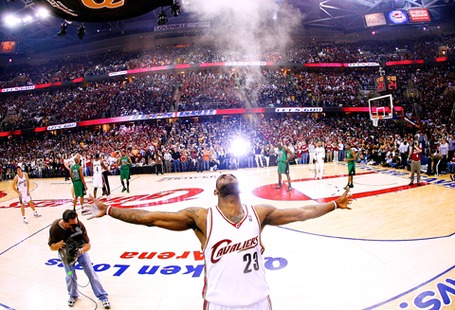 - Pop is hilarious. He was business casual tonight and just looked like he had come from drinking a nice bottle of wine (although that might have actually happened, I mean, it was the Cavs).

- The Cavs introductions were pretty cool. Filled with loud music, fire, and a pretty good MC. I can see how awesome it would have been when LeBron was there. My wife made the comment that it seemed very forced now though. I told her they couldn't change the intro's just because their starting lineup consisted of a guy named Samardo Samuel. Timmy was cheered pretty loudly, Manu was of course boo'd.

Don't see much of this around these parts anymore

- Pretty much just a back and forth for the first quarter of so. Neither team doing anything special. The Spurs looking like they just played last night and the Cavs like they had something to prove. And then it happened......Chris Quinn came in the game. Now I didn't watch the Memphis game, nor have I seen Quinn play a lot other than being the victory cigar with Steve Novak. But let me tell you....he was awful. I have nothing personal against Quinn and I'm sure he is a great guy, but he is just a very poor backup PG. The offense came to a screeching halt when he came in and that's how the Spurs fell behind. He doesn't look to shoot and didn't seem to do a very good job of setting up the offense. Ramon Session's eyes just lit up when he saw Quinn and immediately started driving to the basket every possession. I told my wife I hoped we didn't see him the rest of the game. And truthfully, I can't imagine what this next stretch of games is going to look like with him as the back up. I don't have a good feeling about it.

- Midway through the 2nd quarter DeJuan Blair's family arrived. Since they live in Pittsburgh, it made sense for them to make the trip. I'm honestly not sure what member's of the family were there, but as he was walking back to the locker room at halftime, he blew a kiss up to them and had the biggest Beast smile for them. Another quality guy and Spur.

- With less than a minute left in the 2nd quarter, George was at the line. Timmy looked over at Pop, and flashed 2 fingers at him (like giving him the sideways peace sign) about 3 times. Pop smiled back at him, then shook his head no. So not sure what that was about, but it struck me as interesting.

- Manu was not happy in the 1st half. He was noticeably frustrated with teammates and with the officials. There were several times when he gave teammates angry looks and stares. They were all on the offensive end, and seemed to come after missed cuts, bad picks, or just not flashing when Manu wanted. When Pop took him out of the game with about 30 seconds left to not pick up his 3rd foul, he walked to the bench, dropped a nice set of swear words, and remained standing as he was so angry.

- George and RJ came out of the half being a lot more aggressive, I'm sure at the urging of Coach Pop. I knew Hill was playing well, but had no idea he had as many points as he did until I looked up at the jumbotron and saw he had 20.

- The Spurs pulled away in the 2nd half and pretty much took the crowd and Cavs out of it. The 2nd unit did a really good job of letting them back in the game by not scoring for like 5 minutes. Again, not to bust on Quinn, but Pop had to bring George back in the game with a minute left because the offense was so inept with Quinn at the helm. Awesome.

- Most of the crowd had left by the end of the game, but the remaining were standing and urging the Cavs on, if for the only reason that I think we won a free something if they scored 100 points. They ended with 99. That's how it is to be a Cavs fan.

- Manu was the only Spur to stop after the game for a quick picture. A girl in the crowd had on Manu's Olympic jersey, so he stopped for a photo op with her.

- I have never been to a game in SA unfortunately, so I don't know how it is there, but there was so much arena music being played the entire game it was kind of annoying. I wish they would have just let the players play and crowd react, instead of trying to instruct us what to do all the time. But overall, the Q is a nice arena and the fans support their team, no matter how poor they are playing. Just sad to see the franchise has declined so much in the span of 1 season.

Overall a nice win for the Spurs and a good bounce back from their tough game against Memphis. I am pretty concerned about the games that are ahead with our back up PG situation, but for today, I'm just basking in the glow of a Spurs win and the fact that I got to see my favorite team play. My favorite part of the evening was after the game. My wife and I had stuck around a few minutes just to let the crowd leave and for me to soak up what just happened. As we were making our way out, one of the Cavs ushers saw my 21 jersey I was wearing and congratulated me on the win. "That's a great guy and a Hall of Famer you've got there on your jersey", he said. I nodded and smiled and made my way out of the arena.