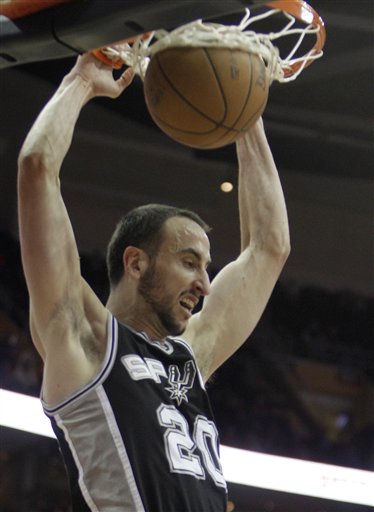 After suffering a blowout loss in Memphis, the San Antonio Spurs managed to get back on track by drubbing the NBA's worst team Cleveland Cavaliers, 109-99. Again starting in place of the injured Tony Parker, George Hill bounced back from a lackluster effort the previous night by displaying an all-around game, scoring 22 points, grabbing 5 rebounds and dishing 5 assists. Hill was ably supported by five other Spurs in double figures. The Silver and Black armada now gets a day off before shuttling to Miami to meet the new Big Three on the block, followed by a third encounter against defending champion Los Angeles Lakers.

Un-cavalier recap, after the jumping jack.

It's late, I just sat through the most boring three-hour class in the history of mankind, I barely got settled in my desk all day due to meetings left and right, and I'm dog tired so pardon me if I don't make much sense. It's the Cavs anyways, so who's paying attention? I kid, I kid. Despite all these obstacles, I shall give it my best effort.

Before anything else, have some homage music to new wave:

It's a little weird that the Spurs are facing LeBron's ex-team before going up against his new one. Nobody expected Cleveland to be playoff-caliber anyway after LBJ left, and this strangely felt like a favorable set up for the Spurs, as if the schedule makers said, "Hey we're giving you the league standard three-games-in-four-nights platter, which includes a home-and-home set against a bruising, playoff team, then fly you off to the other side of the country for a THIGAFONI! But don't worry, it's just the Cavs!"

Just going by vague memory, I would think this THIGAFONI is unlike the past couple of seasons, when the Spurs would go up gassed and get blown out against a tough opponent. Maybe it's a gift, or maybe not after having Miami and the Lakers in consecutive games. I guess it all evens out, eh? But I'd like to think that lady luck continues to smile upon the Spurs. Just imagine if there was no Cavs in the middle of this brutal stretch -- a multiple game losing streak and a few more Spurs fans jumping off the roof is more possible than Charlie Sheen begging to get his spot back on Two And A Half Men or James Franco showing up to the Oscars completely sober.

So... what about them Cavs? Strictly and honestly speaking, their lineup sadly resembles a D-league outfit for this game with Baron "The Hobo" Davis, Antawn Jamison, Boobie(s) Gibson and Sideshow Varejao all sidelined with various injuries. Well, it's not really as if those names strike fear in the hearts of other teams. If you're a bit of a compassionate optimist, you'd be happy for the no-namers getting a significant chance to strut their wares -- unknown rookies in Samardo Samuels, Christian Eyenga and Manny Harris (undrafted), and the perpetually nomadic D-League vet and former Spur Alonzo Gee.

But on the Charlie Sheen zone of things, the serious lack of talent makes the team look somewhat like a bad joke (as I type this, the commentators are interviewing John "Hot Rod" Williams, and then during the 2nd half, Dan Gilbert takes over color commentary duties and speaks in comic sans tone, if ever that font was spoken out loud). I mean, not a lot of people really noticed that the Cavs had awful players when LeBron was there, and now that he's gone, the current players have become fodder for a sad sack game of who's who. I don't know how much basketball cards cost today on average, but I bet the cards of the guys on this team would barely come close to having a value of more than a dollar. Harsh.

Before the start of the game, I was particularly interested on seeing how the Spurs will bounce back after a lethargic showing in their first outing without The Wee Frenchman. As far as I can remember, the team so far this season has regularly bounced back with a vengeance after losses. There's the game against Philadelphia when the team couldn't buy a shot to save their collective behinds, then walked into Washington the next game and hit every shot in sight. There was also the game against the Celtics, coming off a loss to the Knicks in which the Spurs gave up their most points in the Duncan era. Although that Boston visit was a loss, the Spurs hung tough against a hot-shooting team, and even had the chance to steal it, on a SEGABABA to boot. 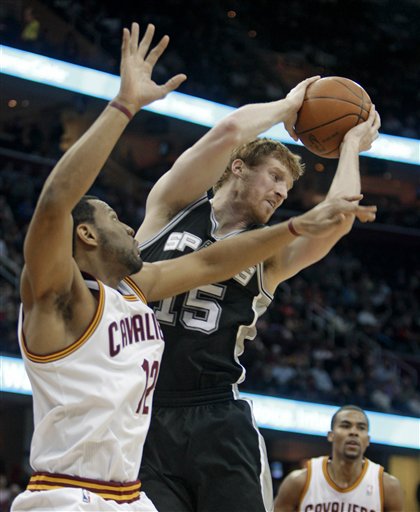 Coach B with Both Hands(TM)

So what did I learn after the game? Well, c'mon now, it's the Cavs so maybe we shouldn't look too much into it, right? Like all the other games before it, this game probably won't carry as much weight right now, but it continues to validate how the Spurs have been operating all season long -- on multiple gear shifts. Surely, having multiple gears is a prerequisite for championship teams, but allow me to elaborate a little.

It's not surprising why the Cavs stayed within striking distance after the first half. The Spurs were on a THIGAFONI (or SEGABABA, if you like that better), still very much tired from the West-to-East flight, and a little bit worse for the wear mentally after last night's loss. Meanwhile, Cleveland, as talent-dry as its lineup is, have hungry young guys wanting to capitalize on the enemy's vulnerability while trying to add the scalp of another quality team to its sparse collection of wins. It's a perfect recipe for a TARP game, by most accounts.

Instead of maybe jumping quickly on the Cavs to quickly erase the sour taste of the previous night's loss, the Spurs were content to start in the first gear during the first quarter, allowing Cleveland to score 25 points and take a slim 1-point lead. In the second quarter, still leaving the defense on first gear while cranking up the offense to second, the Spurs manage to explode for 33 points. But as mentioned, with defense on gear #1, the Cavs managed to keep pace by scoring 27 points.

And then the expected happened. Maybe Pop did some begging again, but this time for the team to shift the defense gear to at least level that of the offense, and the result was a 32-20 third quarter in favor of the Spurs. If you're counting, the 2nd quarter had a +6 differential, and the team doubled that in the next quarter with a +12 to take the fight out of the Cavs (although they did battle back fiercely in the fourth, but the Spurs never really looked threatened). DeJuan Blair was particularly instrumental in leading a telling 14-2 run in the third, scoring 9 straight points off fancy layups. Rage and Matty splashed a three each, and the rout was on.

I don't know for sure how high the Spurs' offensive and defensive gears can go, but as we've seen, even their first gear is probably at par or even better than the average team's second gear. This is good since the team knows it's capable of switching the afterburners to leave opponents in the dust, but it's also bad that sometimes, you let the enemy hang around too much while scrambling and ultimately failing to switch to the next gear. It's also dangerous to stay too long at one level against the better teams. The Spurs have quite a big target on their backs now that they've held the best record in the league for quite some time, and each team will be playing, trying to see how high a gear it can reach against the Spurs, who unfortunately have taken on the role of league measuring stick.

On the brighter side, even with Parker out, I'm pretty sure the team already knows this "we're coming for you, and we'll prove that you're not really that good" mindset opposing teams have when facing the Spurs. In our remaining games, we'll see how the Spurs respond to the challenge -- will they continue to dump a big "eff you" to the rest of the league (and the Sports Guy) and keep on winning, or lay off the gas pedal a little, maybe play mind games just as how CIA Pop likes it, but lose momentum along the way. Which is pretty unconventional for a team that has a habit of finishing strong for the past decade or so.

But then again, with already 50 wins through 61 games, who's still looking for something conventional?

3 - Manu Ginobili -- 13 points (5-10 FG), 9 rebounds, 6 assists, 1 steal, 2 TOs. Didn't go all Supernova on the scoreboard, but played very controlled, often looking to set up his teammates in the absence of Parker.

2 - Tim Duncan -- 16 points (7-12 FG), 4 rebounds, 6 assists, 3 blocks, 3 TOs. Opened up driving lanes and the outside for shooters early by schooling the undersized and inexperienced Cavs frontline.

Up Next: Miami's Modern-Day Big Three take their talents to Texas for a visit FINALLY against the still TP-less Spurs. I'm scared for a blowout loss, but hopefully the Spurs won't let their home fans down.