Since I'm now on "staff" (snicker, snicker), I get to talk regularly with some of the other contributors. Several times the idea has come up for me to post a list of current rantings. The types of points that don't necessarily justify a complete Fanpost or Fanshot, but that require small commentary none-the-less. They see it as a way to keep SiMA from filibustering on the phone. I see it as a way to keep my stress level down, as well as hitting my monthly post quota from JRW; not to mention a way to aimlessly vent. So it's a win-win. Comment as you see fit, persuade if you're able, and contribute. If there's something I'm missing or a point you want to hear addressed, let me know.

(for those of you who love confusing abbreviations, "SiMART." Kind of like KMart, but without any neck tattoos.)

£. I'm getting fed up with all the news on Chauncey Billups and his trade. Living in Colorado I hear all sides... how noble and wonderful Chauncey is, how team-first Chauncey is, how good of a guy Chauncey is, how Chauncey and the Thuggets (can we still call them that?) both wanted him to retire there. Don't know if I'm the only one who sees it, but doesn't anyone else see the hypocrisy and fraud of both Billups and the Denver owners lamenting the trade? First off, we live in an era of PLAYERS calling the shots, not the teams. Especially when that player is so "loved" and so "respected." You're trying to tell me that Chauncey couldn't have prevented himself from being traded?? He couldn't have threatened retirement or gone public, getting his entire fanbase onboard and complicating things for the owners? Second, regarding the tear-filled press conference given by the team (Josh Kroenke and Masai Ujiri -http://www.huffingtonpost.com/2011/02/23/denver-nuggets-executives_n_827051.html) in which both architects lamented that they never wanted to trade Billups, that he's so important to Denver, that they hope their legacy isn't remembered for getting rid of him... REALLY??! An owner and GM apologizing for having to trade an icon in the community?

Guess what... they DIDN'T have to trade him. There are other pieces they could have traded but they simply didn't want to. They're in love with Ty Lawson and he's the PG future of the Denver organization; were he not on the roster, do you believe Billups would have ever been on the block? Absolutely not. All of this talk from both sides seems only to be a PR move to appease the community and maintain post-career opportunities in the area, nothing more. Just stop with the charade and the lies. Of course, I shouldn't be expecting any more from an organization so committed to dysfunction (Yes, JR and Kenyon are still on the roster) and a player so committed to selling himself. The overrated stature of Chauncey "self-proclaimed big shot" Billups should quickly lead me to be unsurprised at this latest con job. Don't think he's overrated? Turn on espn right now and see the constant replays from last night's Heat game. That was a regular season game. No more needs to be said.

But I really WANTED to stay in Denver. Really!

£. So I was reading Sports Illustrated (February 14, 2011 issue) in the doctor's office the other day and came across an interesting story about Amar'e Stoudamire. Normally I wouldn't put the words "Amar'e" and "interesting" in the same sentence, but it was interesting for several quotes that jumped out at me.

1. "He wasn't sure of himself, and when you aren't sure of yourself, you do two things: talk about how good you are and blame somebody else when things go wrong." -Dan D'Antoni, brother of Knicks coach Mike D'Antoni and current Knicks assistant, and former Suns assistant coach during Mike's tenure in Phoenix; talking about how Amar'e was when he was a Sun. Hilariously ironic, hearing a Kleenex Suns alum psycho-analyzing and pontificating about placing blame. Seems Dan might not just be referring to Amar'e in Phoenix. Sounds an awful lot like the entire coaching staff and team during your time in the desert, eh Dan? Somewhere out there, Big Shot Rob is nodding vigorously.

2. 'New York guard Roger Mason Jr. likens Stoudemire's leadership style to that of Tim Duncan, Mason's former teammate in San Antonio." Really Roger? REALLY?! No wonder you quickly became dead weight to us- you're an idiot. Once I supported you, but now you're just dead to me.

[Editor's note: What follows is and imaginary interview from JRW, following up with RoMaJu about the above quote.]

JRW: Roger, would you mind elaborating on you comment about the similarity between the leadership styles of Amar'e and Duncan?

RMJ: Uh, yeah. When coach isn't around, and something happens, somebody's got to say something. (Short pause) That's the way Tim was. He'd say something. Amar'e does too. See?

JRW: Uh huh. Back to you SiMA. 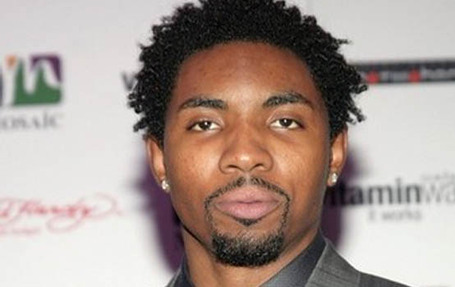 Why, yes. I do happen to have some Grey Poupon.

£. Many of you already know, I've worked tirelessly over the last decade to put together a "Spurs man-cave." Framed pictures, balls, flags and other memorabilia don the walls. To the dismay of Mrs. SiMA, it's a place to watch games and get away from Mrs. SiMA. LatinD called it a sort of "batcave" when he visited. I was internet browsing the other day, just looking for new additions to the cave, and I came across Timmy's Fathead available for purchase. I spent the next 20 minutes laughing out loud and reminiscing on "those days." Remember the 'fro?! 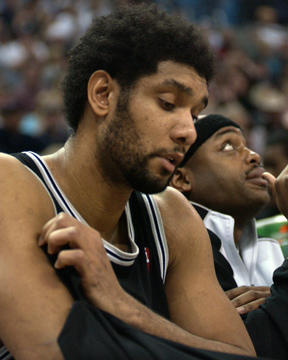 I can see what's happening to Manu. I'd better grow this 'fro while I still can.

£. Aside from the impending potential lock-out, the league is sitting on another powder keg. In the wake of events over the past year, there is a clear potential for massive change in the NBA as stars gravitate to large market teams for limelight and money. We've seen "LeDecision," the "MeloDrama," and the catchy-nameless "Deron jumps from the Jazz and heads to New Jersey Brooklyn." The effect this trend has and will have on smaller market teams is frightening. While the new CBA could change this trend by mandating different rules and allowing 'franchise' tags, it's curious to wonder how a smaller market team can ever truly compete with a Florida, NY, LA or Boston. The Spurs caught lightening in a bottle with the lottery... TWICE!, and likely won't have the same luck again. With the seemingly unlimitted resources of the above-mentioned 4 locations/franchises and with the arrival of the "I wanna play with pals in a big market above everything else" (or, the "athlete who thinks themselves bigger than the game itself") mantra, the league's dynamic of team-building has changed. True, smaller-market teams have always had a more difficult time than the Big 4. They're behind the 8-ball in that they must compete relying more on the draft, developing talent, and overseas imports and less the dollars and the allure of attention. I've always said this very fact alone makes our wins so much more valuable. But this past year has seemed to forecast a trend in the way our athletes perceive themselves and their careers. Athletes are far more "me-focused" and far more concerned about peripheral ventures (off-court endeavors, sponsorships, post-career planning, etc.) than the very game itself. If this pattern continues, how much MORE challenging and difficult will it be for the outlining teams/cities to remain more consistently viable? How hard will it be for the Portlands, the OKCs, the Milwaukees, the San Antonios to pose serious threats to the all-star squads in the media markets when the major stars aren't willing to play there?

[Ed. note: the following are a few pieces SiMA recommends for further reading on this topic.]

Related quote from Bill Simmons' latest NBA article- "EVERYONE WHO CLAIMS THE NBA IS BEING RUINED BECAUSE SUPERSTARS WANT TO CONTROL WHERE THEY PLAY. What a lazy argument. Over the past six decades, the following players pushed their way from a worse situation to a (seemingly) better one either by trade or free agency: Wilt Chamberlain, Oscar Robertson, Shaquille O'Neal, Kareem Abdul-Jabbar, Moses Malone, Rick Barry, Charles Barkley, Scottie Pippen, Bill Walton, Kevin Garnett, Allen Iverson, Gary Payton, Ray Allen, Jason Kidd, Clyde Drexler ... should I keep going? Now this "phenomenon" is endangering the game??? As Kenny Smith said last night, "If [a small-market team] builds the right pieces around the right guy, he will stay." Period. Duncan stayed in San Antonio because it built the right team around him. Stockton and Malone stayed in Utah because they had each other. Durant will stay in Oklahoma City because of Westbrook and everyone else. LeBron left Cleveland mainly because it made bad trades and signed the wrong guys. And Utah never would have thought it might lose Deron Williams if it hadn't screwed up the roster around him. Besides, why is it such a bad thing to have six or seven loaded teams and six or seven terrible ones? Oh crap, I hate seeing the Finals with all these elite players! Give me a break." 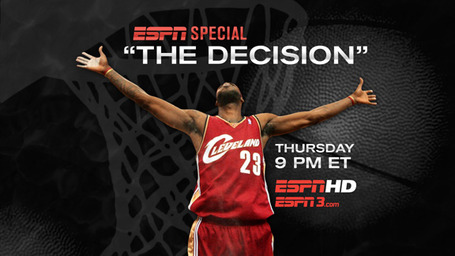 Such showmanship! Such grace! Such humility!

£. A poll I'm curious about : Who among you actually cares about the overall finishing RS record? I've caught myself getting wrapped up in finishing with a record-setting and attention-getting record, but does it really matter and do we really want that? Ask Dallas how debilitating it is to win nearly 70 and get embarrassed so early in the playoffs. Not saying we're falling into that role, but when so much attention is placed on regular season success, doesn't it set you up for failure in the playoffs?

£. Speaking of, are the Mavs coming on strong and do they pose a serious threat? Jason "paper airplane" Terry seems to think so. But check out Marc Stein's comment from today- they "have already played 23 games decided by five or less. That was their season total in Carlisle's first two." Not a good sign if you're a Mavs fan. Point differential is such an important and often overlooked stat, and struggling-to-close-out-games isn't a challenge you want your team to have going into the post season. 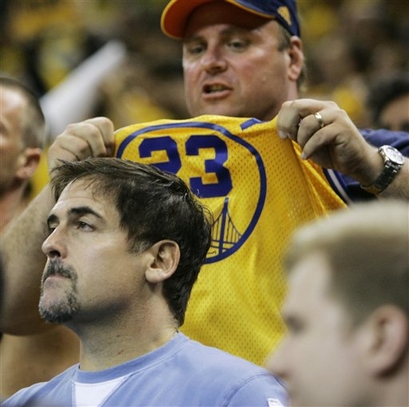 Some things can't be ignored, Mark.

£. You know all these edited commercials in which they digitally plug someone into old footage of a player? I can't wait for the one with Timmy. It's grainy footage of a pool in the tropics, and there's this long, skinny kid doing laps and oblivious to the world around him. Then there's this pretentious old white man dangling his legs in the water and pleading with him to pick up a basketball because those rednecks in Texas are gonna love him. Then he says that Timmy's gonna have fun playing with "Manu Ginobili," and we have to imagine Timmy giggling because he's still underwater and doesn't even hear the comment. 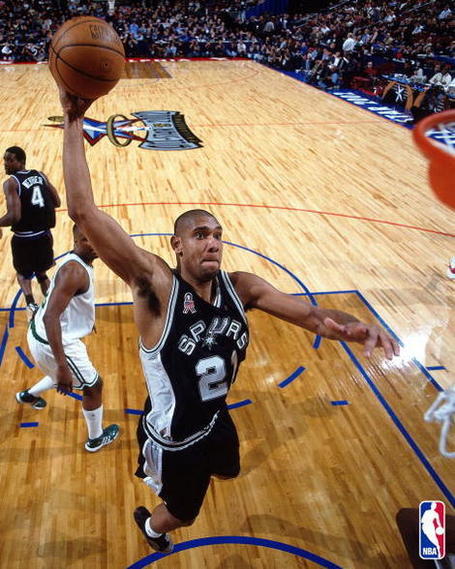