Share All sharing options for: Photos - Spurs JV Gives Us Reason to Cheer

When I left Austin for the game, I knew Manu and Tim would not be playing. Shortly after entering the arena, I got the news that Tony and Dice would also be sitting. I joked with Richard Oliver that I should have made a sign that said "Christus Santa Rosa Hospital: Home of the Spurs". But the Bench Boys put on a show for the crowd, and the fans rewarded them with some of the loudest cheers of the season. Coach Pop's decision seemed to be a wise one. And Zach Zarba, the Gel- Haired Devil who tossed Pop from a game last year, returned to call the game and heard some of the loudest boos of the season. 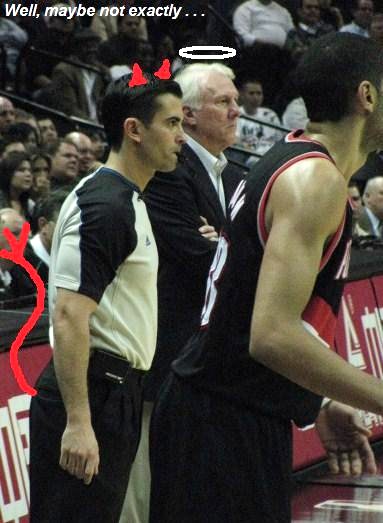 At one point last night, after reading some of the recent posts from the pseudo-coaches and bridge-jumpers on PTR, I had decided that as a form of quiet protest, I would not post photos from this game. But with the light of dawn, I looked at the photos again and realized the Bench Boys deserved their day on PTR, too. And the bridge-jumpers needed something to maybe make them smile while the pseudo-coaches needed to lighten up. And in another thought, those folks probably don't look at my photos anyway. So, for the rest of us, here's a look at some moments from a game that I have to say was one of the more enjoyable ones I have watched at the AT&T Center. No, we didn't win, but to see the guys plays with such heart while the "stars" actively supported them from the bench was special - this is a TEAM, folks. Oh, and it was hard to focus the camera as the joint was literally jumping, especially in the removeable seats where I am located. 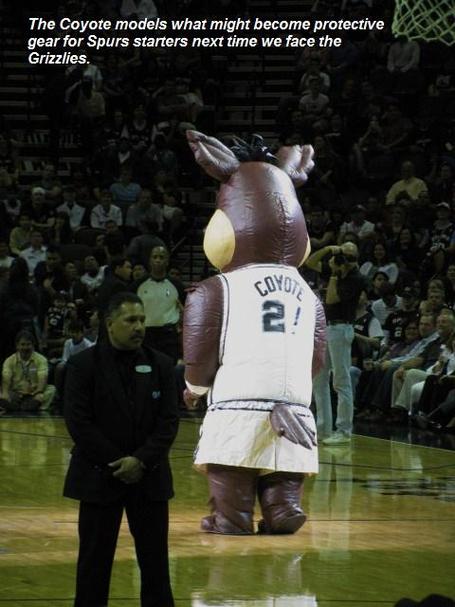 Chris Quinn had a good outing - showing off a tear-drop here. 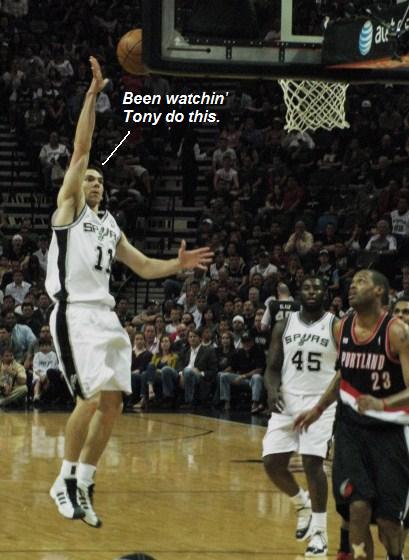 Brandon Roy showed up as the defender in three good shots from the Spurs: 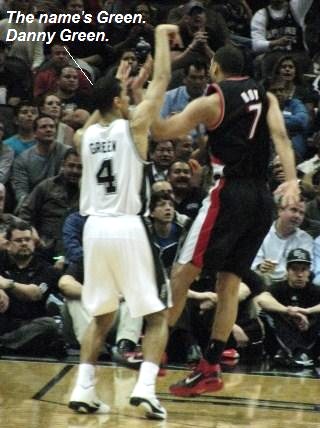 Then Quinn shoots a three over him (well, maybe not OVER him - gotta save what's left of those knees, Roy): 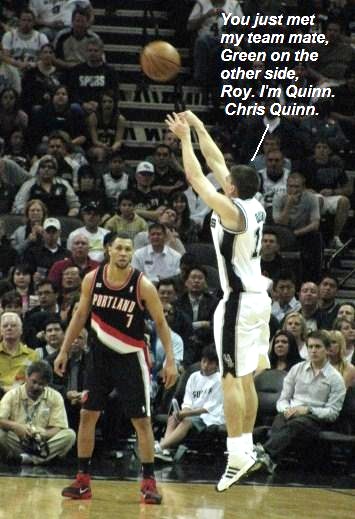 And DeBeast added the exclamation point! 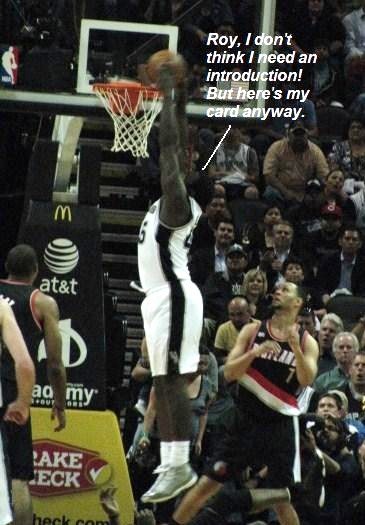 A few times each season I get a shot of two players engaged in what looks like a choreographed basketball ballet: 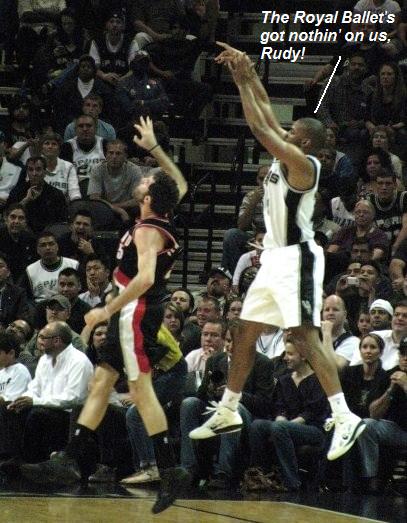 Novak didn't connect as well last night on his shots, but the form is sweet: 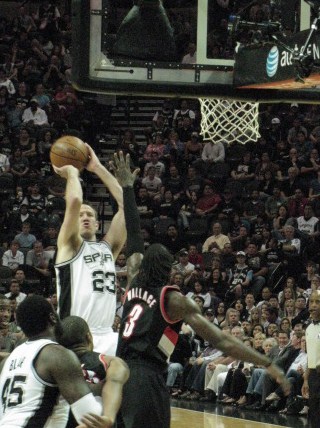 The only "star" in the starting lineup, Jefferson had a lot of frustrating moments in the game: shots not falling, foul calls that he questioned. - here he tugs on his jersey in frustration. 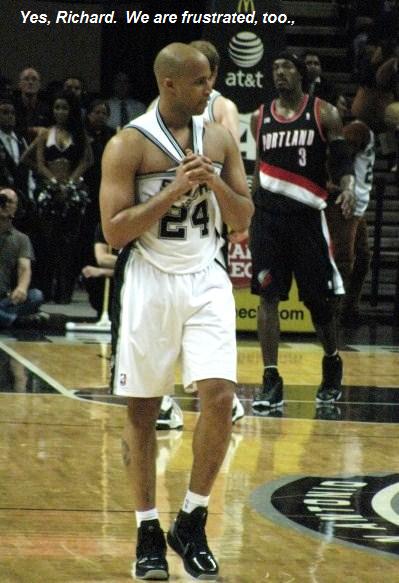 Tiago had both good and bad moments, and you can't forget about those ugly moments at the free throw line either. 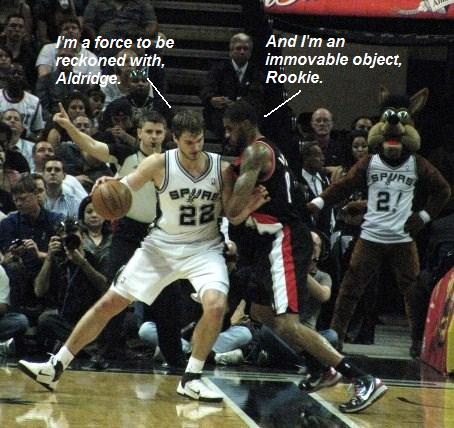 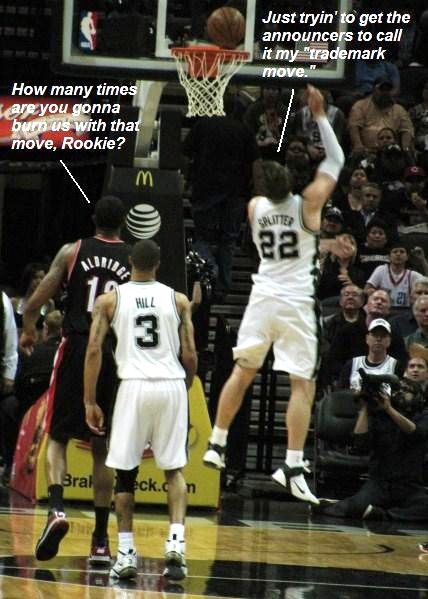 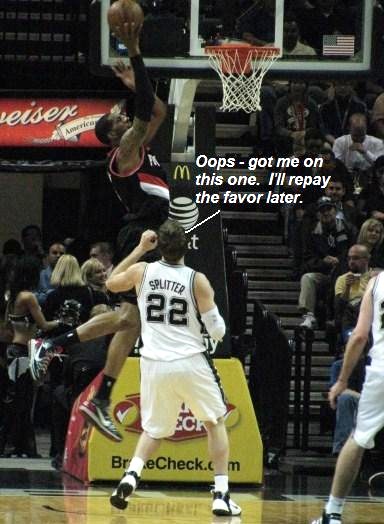 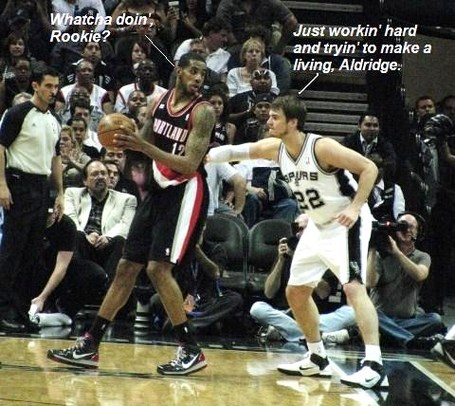 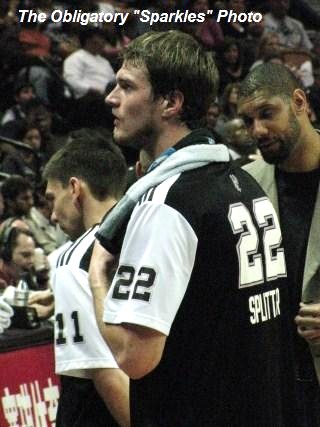 George Hill had his second good game in a row. He seemed to pretty much do what he wanted on the way to the basket tonight. 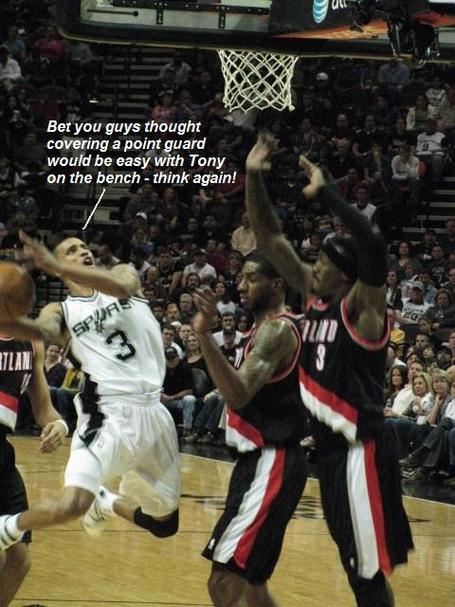 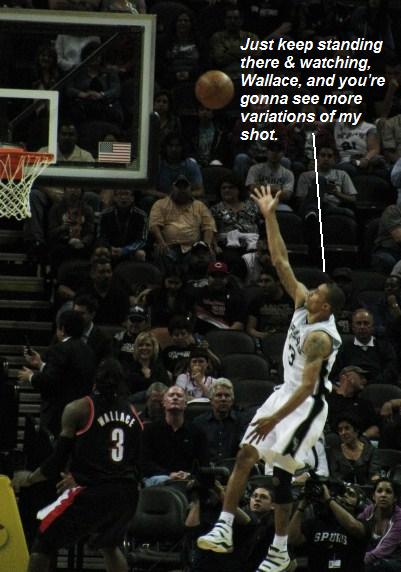 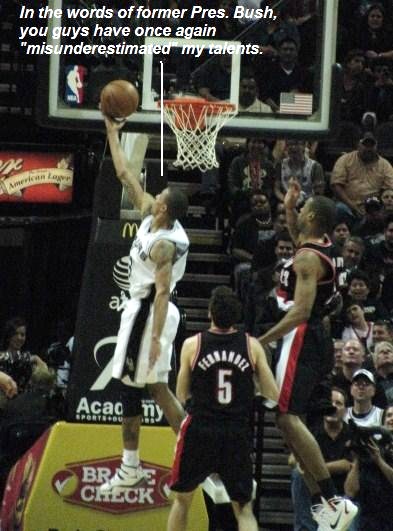 And then there was the fun on the bench -

McDyess came out looking very sharp in a black suit with a Western-cut yoke on the jacket. Timmy, on the other hand - I laughed at Hirschof's tweet about how he hoped Tim was not planning to grow into his jeans upon retirement. My question is how do you get jeans too long for your when you are 6'11" tall? I could not get a good shot of the back of Tony's jacket, but it had a skull with a top hat embellished on it in black velvet. Manu was in his baggy jeans, tan sport coat and window-pane brown and white shirt. And that's your fashion report for the day. 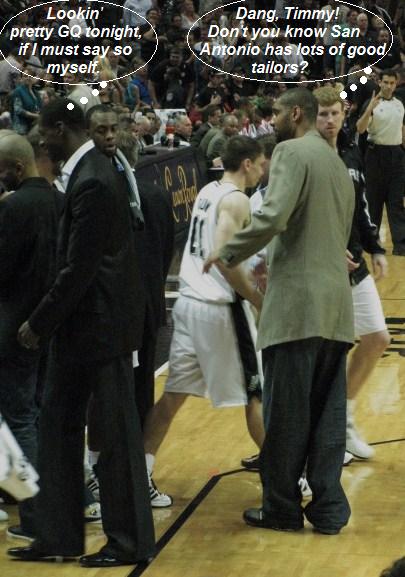 You have to look closely to see the tophat and skull on the back of Tony's jacket. 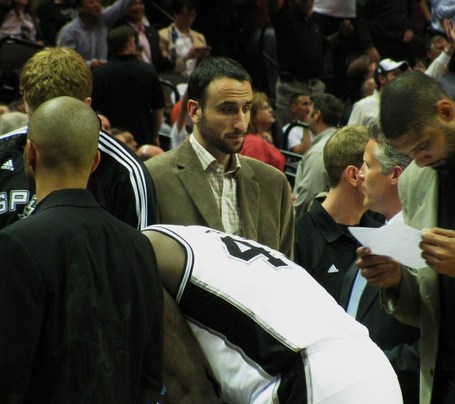 Tim and Tony are definitely buddies: 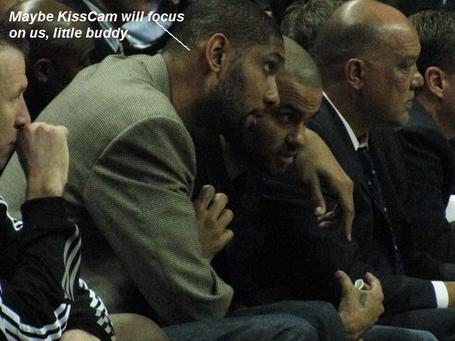 And then there were the officials - a lot of games go by without me noticing them too much, but tonight's game was not one of those.

George Hill was on the floor screaming for a time out and Zarba called jump ball - George was not happy! 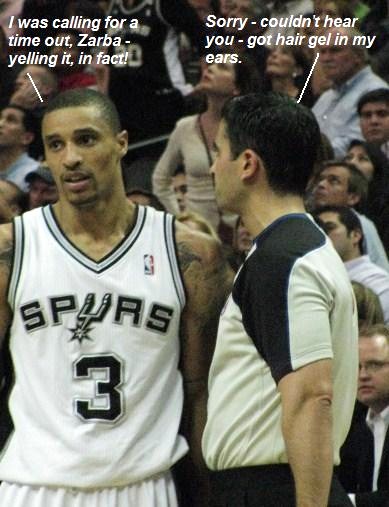 And when Tim and Tony added their opinions on the call, they were told to sit down and hush by Zarba. 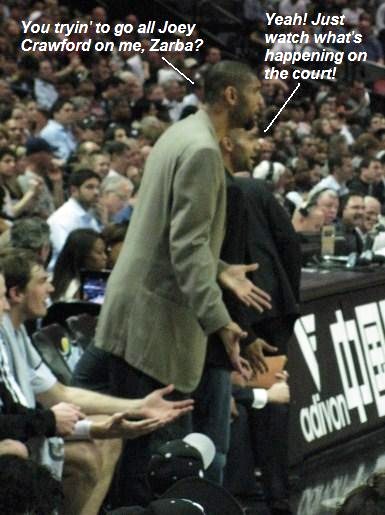 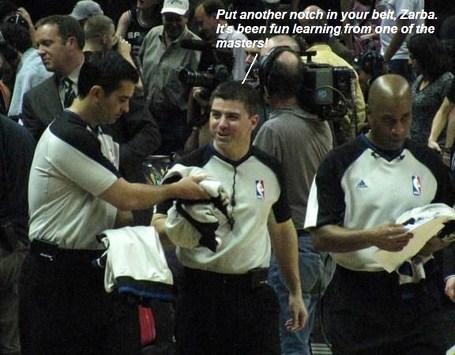 Why is this man smiling as he leaves the court? (But he is a handsome Devil) 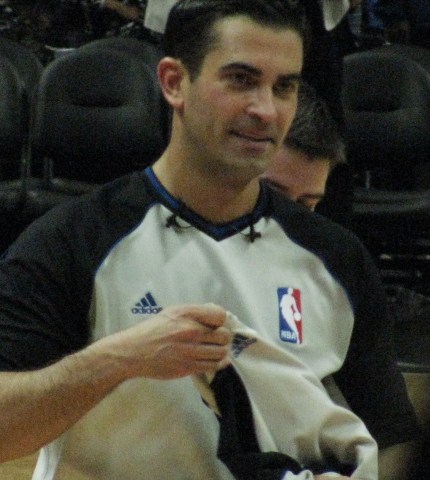