A few days ago, my second-born child (my oldest daughter) caught a lizard in our yard and my wife converted our long-unused aquarium into a reptile habitat. All of the jrwlings love animals, but JO2 (JRW Offspring 2) is crazy about them. For the last year or so, she's insisted that when she grows up, she wants to be a pet shop owner. Nearly every animal she sees, dogs and cats especially, must be petted, hugged, and nurtured to the extent that the creature will sit still for it. Which brings us back to the lizard. She won't be allowed to keep it indefinitely but while it's in her care, she must feed it, which meant the purchase of crickets from the pet store. What does this have to do with Spurs vs Trailblazers? I'll bring it home as quickly as I can, I promise. Thanks for your patience.

This morning, JO2 came into the living room and requested permission to feed Goldie, the name she'd given to the ordinary, green lizard which had recently increased the population of the Wilco household. Feeding consists of several steps: first, the lizard is taken from the aquarium and placed in a small portable cage made of plastic & mesh. Then a few crickets are shaken from their container, and that's when things get intense. Now I've never been involved in falconry, but after this morning I can definitely appreciate the appeal. Everyone crowded around the little container and each movement of the three crickets was closely observed. The slightest tilt of the lizard's head, and multiple children gasped. At any moment there would be a pounce, and no one wanted to miss it.

But the minutes ticked by and though the lizard moved around a good bit, he didn't seem to be very interested in the hunt. The crickets were oblivious to him, and roamed about exploring the walls and testing the corners for an exit. The jrwlings started to lose interest after a while (they've been watching this all week) but this was my first chance to witness feeding time and I sat transfixed, taking in every motion of both prey and predator. Sure that at any moment, -- my concentration was broken by JO2's confession that she HAD fed him quite a few yesterday, and he might not be hungry today. I began to wonder whether the lizard's movements were really pregnant with meaning, or whether I was merely inferring purpose, because of what I expected, where none existed . If the lizard wasn't hungry, he simply wouldn't eat, no matter how much I wanted to see what the little reptile could do.

Just then a cricket passed in front of the lizard, and it was on. For a few seconds, they each moved in turn; first the cricket, then the lizard. Cricket, then lizard. Cricket, lizard -- lizard. And there was the pounce. It was sudden, swift, and perfect. There had been three crickets, and now there were two. Moments before he had begun his pursuit, the insects had been walking all around him, over him, dropping from the roof of the cage right underneath his nose, and I'd have sworn that he wasn't the least bit interested in eating. So what had changed? Why did he suddenly get interested? Where did the desire come from? 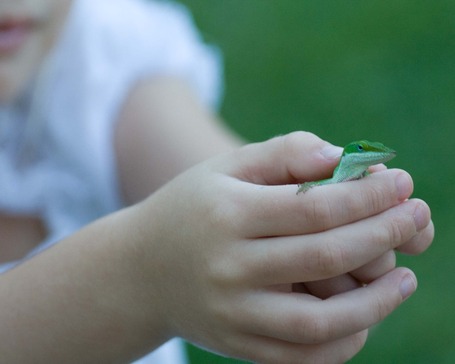 And now, the game

For the last two games the Spurs have played without one Timothy Theodore Duncan, but in each of those contests they have shot out of the gate and built double-digit first half leads. Yes, it takes 48 minutes to win a basketball contest, but this wasn't flukish basketball they were playing. It was two playoff teams in a row that they jumped out on while playing shorthanded. And then, both nights, it seemed as though the team's desire was sated by the lead they'd built, and they relaxed. And the crickets walked all over them.

This is the recap of game 72. There are now 10 games left before the playoffs. Would it be understandable if the Spurs succumbed to the regular season grind and simply played out the string? Could I forgive them if they're not playing with (as Coach Pop loves to call it) the appropriate fear? Yes, it's understandable. Certainly, I can forgive them. And while I tell myself I'm not suffering from what in any other season would have been a heartbreaking loss; as I wallow in my understanding and forgiveness, I realize that these past two games have confirmed a truth that so many regular season victories may have obscured, but could never fully hide: this team needs Tim Duncan.

SiMA said it so well after the Denver game:

The way to see this game is really that we didn't have our star- our foundation, our glue, our floor general ... And we lost... at the buzzer.

Two games out of the season the point is driven home; two roadies in a row the premise that cannot be forgotten is reiterated. This team that we've followed this season is a good one, sometimes a great one, but it's not going to happen this year without the Big Fundamental and his leadership, his post moves, his leadership of the defense, his calming influence during a run by the other team, his passes out of the double-team, his perfectly timed slipped screen, his bank shots, and, yes, even his incredulous look when he's called for a foul he completely deserved.

So, you get no Three Stars for that game last night. You get no quarter by quarter breakdown. No stats analysis and no up next. It was a back and forth affair that saw the Spurs up big, and then down. Up big again, and then an out-of-character crunch-time collapse. A better blogger would be up to the challenge, but I have to admit that I'm not. This week has taken it out of me. Work has been busy and stressful. Duncan was injured. My iPhone went through the wash and died a tragic death, I didn't realize until today that no one had signed up to recap last night's horror. I just can't bring myself to dredge through the game and bring you the tidbits that I normally would. The game was everything that basketball can be to tie you up in knots, but without the satisfying ending of a Spurs victory.

After the game, I walked away from the screen and tried to stop thinking about sports. I played a new game I had just downloaded for my new iPhone (it's called Tiny Wings, and it's awesome) and I caught up on some reading. But the whole time, I couldn't shake a certain feeling I had. There was something at the back of my mind that just wouldn't let me go. And I still feel it now as I type this almost an entire day later. It's the same feeling that I had this morning when the lizard was about to pounce. Duncan's getting healthy and the Spurs will be at full strength. That's enough for me right now.