Game #71 Preview: Spurs @ Nuggets - A taste of life without Duncan

Share All sharing options for: Game #71 Preview: Spurs @ Nuggets - A taste of life without Duncan

So the Spurs beat the Warriors, but managed to lose Tim Duncan for "a while". Not a great trade off at all. In fact the Spurs schedule coming up is packed full of playoff teams. Could there be a worse time to lose the teams defensive anchor and unquestioned leader? Well, yes. It's called the playoffs.

Perhaps this ankle sprain will be a blessing in disguise for the guys in silver and black. Maybe we'll see more of a certain Brazilian Rookie and see the promise he shows. Perhaps Blair will get back on track with his double doubles. Perhaps Manu will go back into video game mode. As somebody famous at some point once said: "That which causes us trials shall yield us triumph, and that which makes our hearts ache shall fill us with gladness. We must pass through the darkness to reach the light."

10 meaningless points for whoever can tell me who said that. As the Spurs brace themselves for a time with out their franchise player, they prepare to play a team who seems to be blossoming without their former franchise player. The Nuggets are now 10-4 after the trade that sent Carmelo Anthony to the Knicks. They've moved up to the 5 spot in the West and are poised to give one of the top 4 teams some trouble in the playoffs.

Denver is playing better team ball now that they aren't all standing around watching Melo do his thing. I've seen parts of several games that they'e played since the trade and they seem to be enjoying the game more. Who wouldn't? Nene, one of the best young big men in the game, is finally showing the potential that he's always had. While Smith, Chandler, Gallinari, Felton and Lawson are all playing lights out in the Mile High City. They lead the NBA in scoring and have a +12 point differential since the Melo deal. Did I mention they are 28-7 at home? They are. 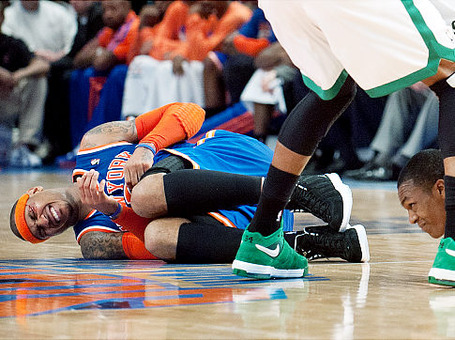 Getting cracked in the head hurts in New York too.

I do not have a good feeling about this game. Denver is big, physical, hungry and finally playing as a team. Sure they still have head cases like K-Mart and Smith, but Nene, Gallinari and Lawson lead this new look Nuggets team and they are looking good. The game tonight will be the 4th in 6 nights for the Spurs who will doubtless be a little worn out having had a short bench the last couple of games with Duncan resting and then getting hurt as well as missing Blair against Golden State.

Denver Stiffs has an article up after the Thuggets wailed on the Raptors and I tend to agree with this thought: "...the Nuggets are damn scary to play against at Pepsi Center. So it should surprise no one that the Nuggets currently possess the Western Conference's second-best home record and the NBA's fourth-best home record."

Here's some tunes for you while you contemplate the Spurs chances tonight:

PG: Parker needs to dominate Fisher and all other comers including Felton and Lawson. Parker's offense will be even more necessary with Duncan out. I look for Tony to have a big game and hopefully a big stretch while Duncan sits out.

SG: Manu is looking better of late and I think he will relish the time to take over with Timmeh sidelined. I really like Afflalo. I wish the Spurs had nabbed him with he was on the market a couple years ago. He's a solid offensive player with a nose for good defense and plays pretty smart basketball. That said, he's not The Sickness and The Sickness gets the Spur.

SF: Rage couldn't hit anything in the Warriors game until he took the rock to the rack. As usual Tiny Ears will need to put pressure on the opposing SF on offense in order to help out his defense. Although Chandler is a top notch scorer, I give the Spur to Jefferson for the overall game.

PF: If Blair plays it will help our rebounding a lot. I look for him to start and match up well with Martin. I keep talking about Duncan being out and I don't mean to beat a dead horse, but Blair and Splitter stand to prove the most with more playing time. Let's hope that DeJuan is upset about Pitt losing in the big dance will come out on fire.

C: McDyess and company will have their hands full with Nene. I've always like Nene's game and I think he's got real potential to be one of the best big men going for awhile. He's strong, fast and fairly quick with a nice jumper and smooth game. If he can keep his anger in check look for a big night from him.

I'm torn on who to pick here. With the way Bonner has been colder than cool (Ice cold!) and our injury issues with Blair and Duncan our bench is looking a lots less deep. I think Denver will push our second unit tonight and we'll see how they respond. J.R. Smith, Chandler, Felton and Harrington can provide a big bunch of scoring. It'll be up to our second unit to make sure they don't run us out of the building.

I really would like to see better play from Gorgous George. He's been missing a lot of open shots and just seems generally less agressive.

Karl must be liking the lack of Melodrama. He even said that all the players they got from the Knicks were better than he thought. High praise. Pop is still better and it will show late if the game if it's close.

I give Denver the edge here. Playing at home, playing well and looking to avenge a bad loss earlier in the year. Spurs are starting a little road trip and will be playing their 4th game in 6 nights with a short bench.

Again, I'm going with the Thuggets here. Team play and strong belief in themselves tends to bring good mojo.

I hope I'm wrong, but I seen Denver handling the Spurs tonight in a game that's kept close by Manu and Parker. In the end I think that Denver is too hot and has too much for the Spurs on this night.

Three Point Shoot - Both teams are really good at shooting it. The Spurs have vastly improved their 3-point defending recently and are all the way up to 22nd in the league, after spending most of the year next to last. Denver's been good at it all year ranking 9th in opponents 3-point percentage. Whoever takes and hits more threes wins this game...or at least has the key to it.