It has fallen on me to do my first recap for a Spurs game. Of course, about 2 minutes after Bossman told me it was available, Duncan collapsed in agony, clutching at his left leg in a manner eerily similar to a previous game against Golden State. It was as if millions of Spurs fans cried out in terror, and were suddenly silenced. I'm betting Pop won't be playing Tim Duncan against the Warriors ever again. Latest theories are that he's out for 1-2 weeks, though with a healthy dose of truffles and foie gras he could be back against the Nuggets on Wednesday.

In my humble opinion, this is a blessing in disguise. It gives Pop the opportunity to rest Duncan without anyone raising eyebrows around the league. It also allows Tiago to play and maybe even contribute in the playoffs. The only problem is no one likes to pass it to him. I counted 7 times where he was in solid position in the post, but the Spurs looked off him and shot a contested 3 pointer.

Game began with solid ball movement and JRW telling me to recap this game. In my hurry to find a pen and paper to scribble notes on, I missed the game until suddenly Duncan crumpled. At this point, it was 16-7 and suddenly we were all worried that a 26-game winning streak over the Warriors in San Antonio had a possibility of being over. Then Tiago checked in, the Spurs realized they were playing the Warriors and rattled off a 13-4 run to put the game out of reach the rest of the way. From here on out, this game felt like a back and forth, except the Spurs were spotted 10 points by the basketball gods because Duncan was out. My best guess for why Duncan got injured was because Dennis Rodman put a voodoo curse on him. I mean, look at the stats. He "ended" the game with 3 rebounds, 1 rebound shy of 21st place in NBA history. And we all know that Rodman would do that too... 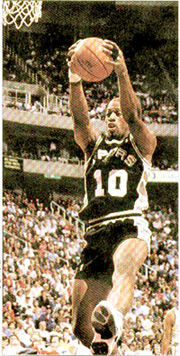 Matt Bonner was getting open looks all night, but all he generated was a bunch of damaged property along the Texas coastline due to his inability to throw it in the ocean. He needs to shoot those shots because there is no one within 30 feet of him. Still in his funk, Bonner needs to just keep shooting to knock all the rust off before the playoffs. Thankfully, Pop has the luxury of continuing to play him through this rough patch without it costing him any games.

Tiago played very well in first quarter when the offense was running through him. He had 8 points and 6 boards in the first quarter: Go, Tiago! The next 3 quarters, he had 2 points and 8 boards: No, Tiago! Of course, it wasn't his fault that the shooters decided to take 30 3's instead of working the ball into the soft rotten-apple interior that passes for the Warriors defense.

As for the Warriors, well... Acie Law decided to make our paint his own personal playground and had 3 acrobatic finishes to help pull the warriors out of their shooting funk. The first quarter ended with the good guys in the lead by 11. The Spurs outscored the Warriors by 4 the rest of the game.

One thing I noticed about Splitter and the offense, is that the ball movement looks so much better when he is in the game vs. when it's Dyess and Novak. It could be someone else's fault rather than Dyess, but it's very interesting. Parker, for example, wouldn't even look at Splitter the whole 2nd quarter. Box Score at the end of the game had Parker with 15 assists. If Bonner had hit his jumpshots and if Parker had even glanced at Splitter, Tony could have had 25 helpers.

We interrupt this broadcast to inform you that the latest demographic McDonald's is attempting to cater to is hipsters. I know this probably isn't groundbreaking news to most of you, but it's very irritating to watch these commercials. Apologies to any hipsters that read this blog. If you don't know what a hipster is, brush up your knowledge on the site that provided Josh with his username. 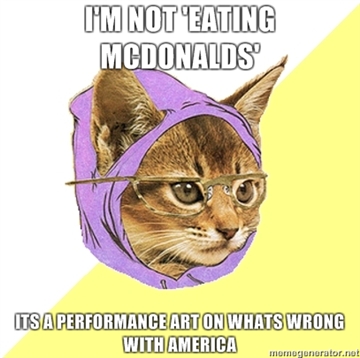 This was a OQC (offensive quarter collapse) for the Spurs, and it wasn't an RQC only because they didn't surrender the lead. There was one of these against Dallas in the second quarter too. The offense just looked absolutely awful in the 2nd quarter with everyone taking their turn trying to show off to their girlfriends/wives/whoever-Richard-is-dating-these-days. About this point, I checked the 3pt % for the team. Everyone except for Bonner was shooting 300%. Unfortunately for the Spurs, Bonner was shooting a -267%. Thus the team's percentage looks like they were only shooting 33%.

Novak was on fire near the end of the 2nd quarter. It's really too bad we can't get him and Bonner going off at the same time. No team in the league would be able to withstand that kind of raw firepower. Interesting stat sidetrack (there will be a lot of these) the Spurs +/- with jrw watching +20; when jrw went to eat dinner and stopped watching -13. Now we know who to blame... [Editor's note: maybe you just need to be thankful that I was watching at all]

For the whole 2nd quarter, Splitter didn't touch the ball on offense. I don't know what kind of plays Pop was running, but Tiago was having a really good game up until that point and he warranted a few more touches. He was making great decisions with the ball, even if he still looks a little unpolished rushed.

During the quarter, the Warriors started hitting their midrange shots. The Spurs at halftime are 6-16 from deep. 8 of those misses were wide open. I can't fault the shots, but if they're not falling, someone needs to attack the basket. At this point, Manu is 3-6 on threes. I think he leads the league in shots missed that I don't remember. I can only remember 1 of his missed 3's. It's very impressive, or it points to how well my mind can block out things I don't like.

I'm pretty sure that the Spurs play poorly leading into halftime so that Pop has something to gripe about in the locker room. I think the guys prefer to maintain a healthy fear of him, and we know he's not exactly intimidating when he's happy.

A happy Pop at halftime is to be avoided at all costs.
via img833.imageshack.us

I'd like to take a second to talk about defense. As of about 5 minutes into the 3rd, Golden State's defense looked better than Dallas'. Yes, I really mean that. I've also noticed how well Splitter was playing on defense. As much as we praise Neal for his offensive capabilities, we should praise Splitter for his defensive IQ. Of course, right when I wrote that down on my paper, he committed one of those silly fouls on a jump-shooter. I call it the defensive heat check. Like when Neal jacks up a 3 in transition without passing, Splitter allows himself a defensive heat-check.

I can just imagine him thinking, "Well, I got that block two possessions ago and they let me get away with that hack last period. Lemme go ahead and try to block this one now. If I happen to knock Wright to the ground, so be it."

Pop gets a technical which seems to awaken the Spurs from their stupor. Which makes me wonder what San Antonio's winning percentage is for games in which Pop got a technical. The teams always seem to come alive when he gets T'd up. He can't use it all the time though, because the novelty would certainly wear off. Right after the technical, Pop puts Hill in and he just freshens up the defense. After this point, the game is no longer in doubt and I started watching individual players instead of looking at the score. I glanced near the end of the 3rd and was surprised to see us up by 20.

The 4th was pretty much the same as the rest of the game. The Warriors hit a few threes to keep it close, but in the end Manu prevailed. We tried to play the Warriors' helter-skelter mode. When Pop got tired of that, he subbed Parker back in and gave Manu the green light to dunk it. They both complied.

Novak - His stroke is pure. He gets it off so quickly too. Unfortunately, his defense is atrocious. His best defensive tactic is to score 3 points so that when his guy scoots by him for the layup, he is still +1. Unfortunately for him he was one of 4 spurs in the negative on +/-.

Splitter - His defense is really really good. Not necessarily individual defense, but his help defense on the ground is fantastic. He stopped so much penetration by overwhelming the Warriors with his body and long arms. I think he's more of a rhythm player. In the two games he's been playing a lot, he's looked much smoother and more comfortable. Now, if only we had a PTR member in Spain, we could send them on a hunt for his free throw stroke. 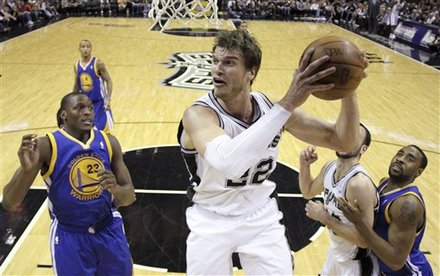 Bonner - I know we see him all the time. I'm just bringing him up because he ended with a +17 +/- score. I don't know how that happened, but he was active on the boards and passed the ball well. It's just weird how much that stat helps him

3. Splitter. His first double double of his career. 10 points, 14 rebounds, 2 assists, 3 steals and just 1 turnover. Things are looking up for the young Brazilian.

2. Parker. He may have had the highest +/- total on the team for this game. But there were too many times where he ignored everyone else to frolic in the paint on his own without help. This nearly always ended badly.

1. Ginobili. Again, I could have sworn that Manu only missed 2 shots the whole game. Then I look at the box-score and I see that he missed 9. I bet the statistician placed some of Bonner's misses on Manu just to make sure that Bonner didn't cry too much. That's the only explanation that makes sense to me.

Wednesday against the Thuggets. I'm not looking forward to this one with Timmy out.