Saturday night's game against the Charlotte Bobcats can be best described as a ho-hum 48 minutes that featured the Spurs bench laying down the hammer on a Charlotte team missing their best player in Stephen Jackson. Game wise, it wasn't all mind numbing. Tiago Splitter revived his first NBA start in place of Tim Duncan (trop vieux) and played pretty well. It isn't like Splitter had any formidable competition though.

But the night also featured an event that was by far more important than anything that took place in those four quarters. Take the jump to take a peek at the San Antonio Spurs military appreciation night.

[Note: I am completely aware of the sensitivity involved with any discussion involving the United States military and all of the politics that inevitably come to surface. Please be respectful when commenting on this post. I am also aware of Pounding the Rock’s members whose homes and national pride reside outside of the United States. My hope is that what I contribute today is understood and respected by all.]

For those of you who hold little knowledge about San Antonio, the Alamo City is home to three military bases; Fort Sam Houston, Lackland Air Force Base, and Randolph Air Force Base. Prior to major base realignments across the nation, Kelly Air Force Base (closed) and Brooks Air Force Base (now a city-base) were also important military installations in San Antonio. Camp Bullis, a large training ground for Air Force, Army, and Marines is also located just north of the city limits. Fort Sam Houston is home to the Brooke Army Medical Center (BAMC), a 30 acre state-of-the-art medical facility, teaching hospital, Army burn treatment center, and Level I trauma center (only one in Army Medical Command). Many of the brave men and women who have been severely injured overseas spend time recuperating and rehabilitating at BAMC. Coming across someone who bears the scars of combat is not an uncommon occurrence in San Antonio. At the moment, Fort Sam Houston is going through major changes due to the Department of Defense’s Base Realignment and Closure program (BRAC). Due to BRAC, over 10,000 military families are currently finding their way to San Antonio, creating one of the biggest economic and social influxes in the city’s history. Upon the completion of BRAC, BAMC will become the largest medical training facility in the world.

The San Antonio Spurs have made honoring the men and women of the United States military a regular occurrence at every home game. "San Antonio is obviously a town that has a significant military emphasis and it’s a big part of our community," Coach Popovich said. "Not just that, but what we have gone through as a country and what the military people have gone through for the last decade, it’s pretty amazing." Each season, the Spurs take one game to completely dedicate to those who serve in the armed forces and those who have served in the past. "Any time they can be honored, it’s not even close to enough to give them the respect that they deserve. So it’s always great to be able to a part of it." 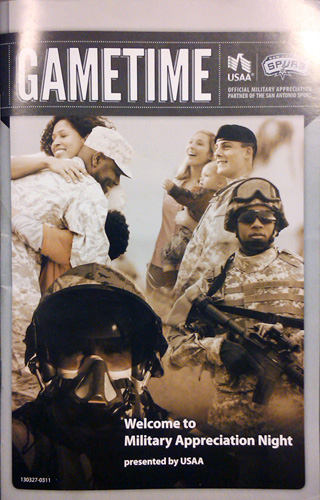 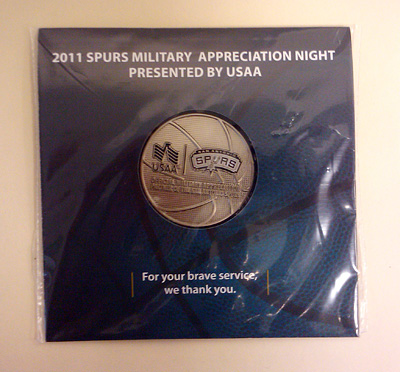 As with their annual custom of honoring the military, the San Antonio Spurs, along with major supporter USAA, asked season ticket holders to donate tickets to Saturday night’s game against the Charlotte Bobcats. I am not certain of the final number but I do know that at least 100 pairs of donated tickets were given away to active duty military personnel in the final week leading up to the game. These donated seats weren’t your typical nose-bleed giveaways. Season ticket holders located all over the AT&T Center, from courtside on up, provided their seats for military appreciation night. Aside from the donated seats, the Spurs also provided discounted tickets for both active and retired military. As usual, the Spurs didn’t hold back on the military dedication. The media parking lot in front of the AT&T Center was converted into a small show room with military vehicles on display, including a Blackhawk helicopter as the main attraction. Fans not only got to gawk at the military hardware but were also able to have their picture taken with military personnel sitting in the machines. Every vehicle basically had the same sight; kids bouncing all around while older gentlemen wearing military ball caps talked the ears off of the soldiers. Waves of spectators wearing uniforms or some other form of military wear marched past as I stopped to check out the display. I spotted everything from Army football jerseys to people draping themselves in flag of the U.S. Marines. I also witnessed a man dressed as a clay-mation horse but that’s another story. 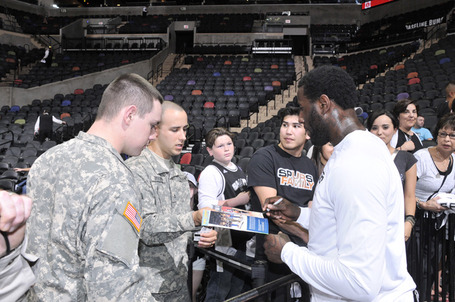 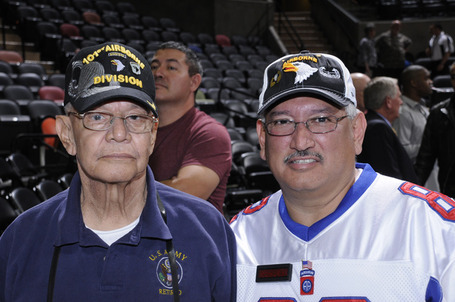 Inside the AT&T, plenty of seats were already filled with groups of enlisted men and women. Several Spurs players took more time than usual during their pre-game practices to sign autographs and take pictures with those in uniform. Every detail that night was centered on the military. The opening ceremony featured a half-court sized American flag and an Army General singing the National Anthem. All of the Spurs Silver Dancers outfits featured green camouflage and every song during their performances was geared towards U.S. patriotism (though I’d argue "American Woman" isn’t exactly patriotic). Most of the participants during the standard timeout games were military; a Staff Sergeant who had served overseas even received a new home, 100% mortgage free, during a break in the first quarter. In the third quarter, the Spurs used one of the game’s breaks to ask all of the active and retired military fans in attendance to stand and be recognized. Players and coaches from both teams stood at their respective bench and applauded as the camera panned around the arena, highlighting those standing. Coach Popovich didn’t stop clapping until the ball was back in play. The only drawback of the night was that the Admiral, David Robinson was not able to attend the game. David normally receives a loud cheer during any on-camera moment - he would have blown the roof off on military appreciation night. 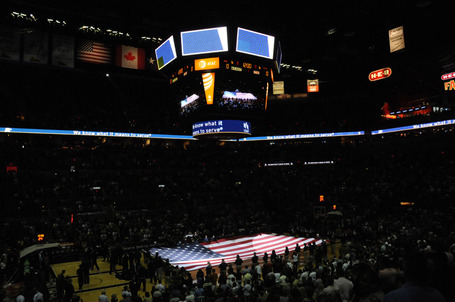 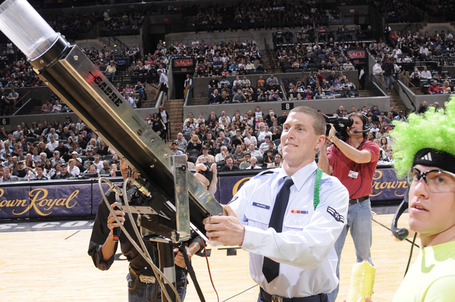 It is nights like these that help make the San Antonio Spurs one of the classiest professional sports teams in the country. As Coach Pop said, there isn’t enough we can do to recognize and honor these brave individuals for the sacrifices they have made only for their country but for the millions of foreign citizens they will ever meet. It is this type of unselfishness and bravery that the San Antonio Spurs strive to highlight and honor each and every game night. It is these types of actions that allow me and millions of others to go about our daily lives unscathed.

To those serving around the world and to the retired back home: