Photos - Sit Back and Take It Easy Against the 'Cats

Share All sharing options for: Photos - Sit Back and Take It Easy Against the 'Cats

Back in the day, when I was a middle school cheerleader, we had a chant that went something like "Texas horses, Texas cactus. We play you, just for practice." This game had the feel of a preseason game for the Spurs. But the Bobcats, who entered the game with a 28 - 40 record, looked at it as a chance to gain a game on the Pacers and possibly get closer to getting the 8th seed in the East - REALLY! Timmy got a rest tonight and Tiago got the start. 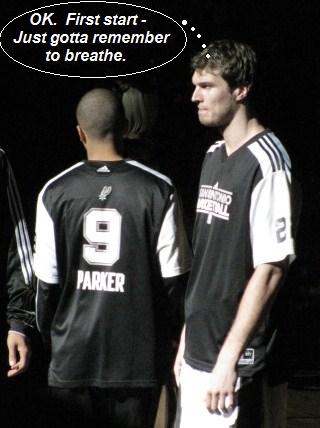 The starters huddled in a darkened arena, undoubtedly each with their own thoughts. 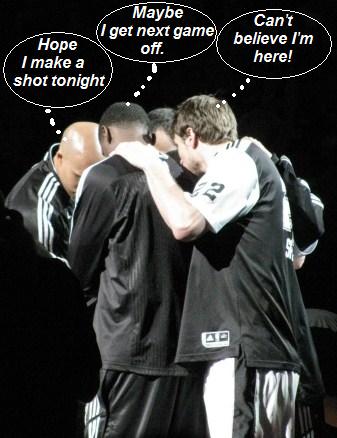 It was military appreciation night, and the National Anthem was sung beautifully by no less than a GENERAL! I was impressed. 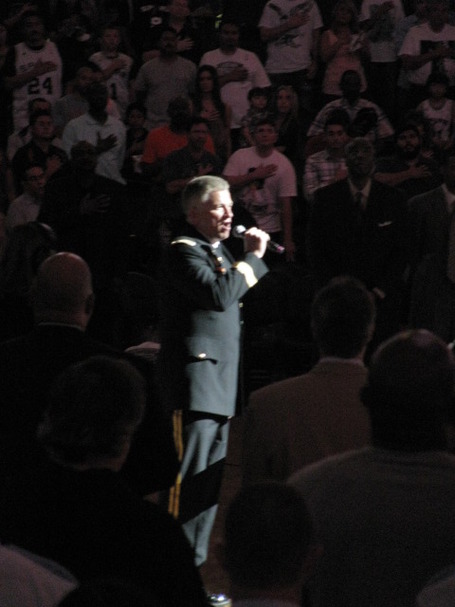 Timmy was getting a rest. But what is making him act so silly? Gotta read through the entire story to find out. 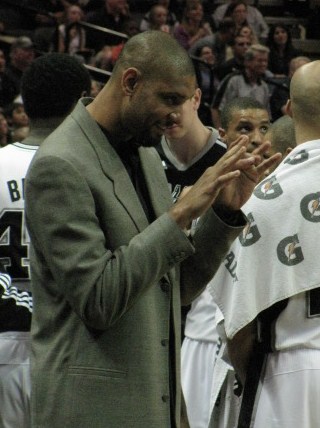 The Coyote posed with children during the game. He looks like he has a new costume, and new eyes. He is still the best mascot in the NBA! 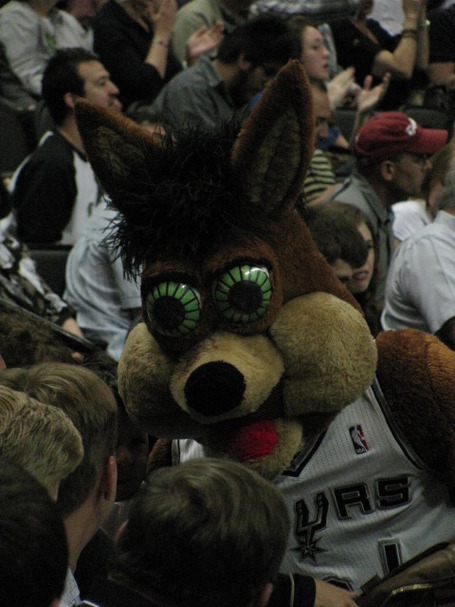 Tiago was fouled early in the first quarter and had to go to the free throw line. His nervousness showed as he airballed the first one and then hit the second one hard off the backboard. Coach Engelland has his work cut out for him this summer. 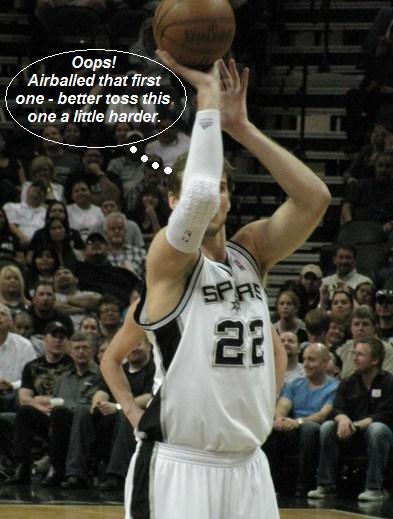 Tiago settled down, going 4 of 6 from the field, grabbing 6 rebounds, a block, and a steal. In the third quarter he sank a pretty fall away jumper and was fouled by Diaw. He missed the free throw. 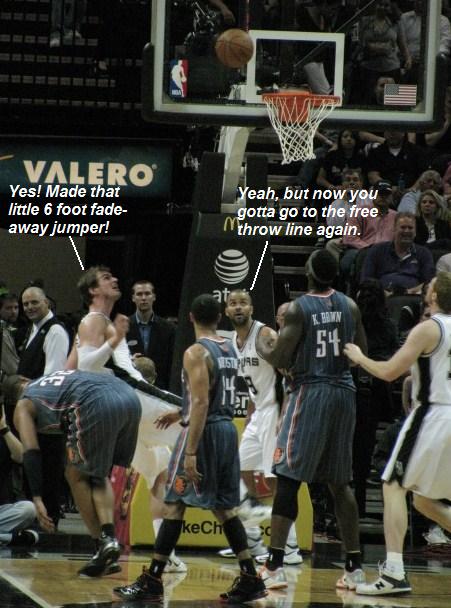 It just wouldn't be a Spurs game if Tony didn't have an animated conversation with a referee. This one was followed by several "if looks could kill" expressions from Tony. 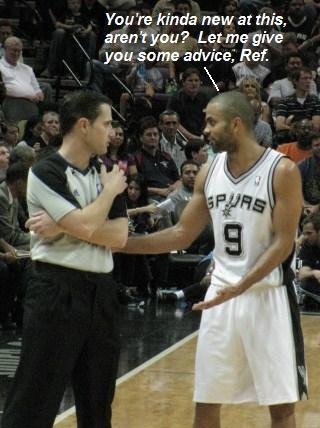 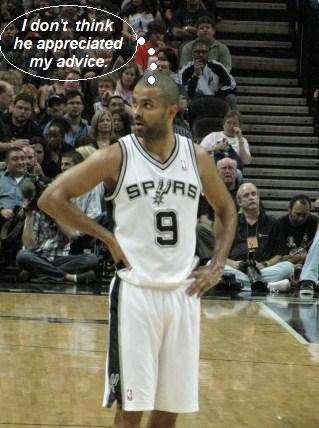 The Red Rocket struggled to land his threes, but this little jump hook was really pretty. 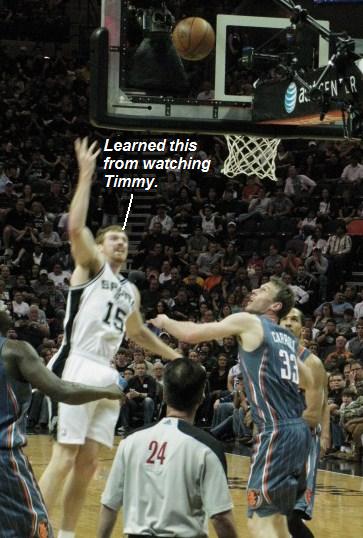 Steve Novak had little problem sinking his threes, going 5 for 8 and leading all Spurs with 19 points. Here he runs back on defense after draining one. 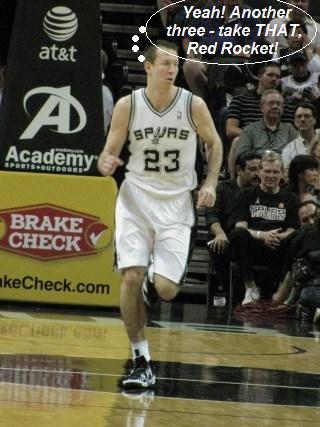 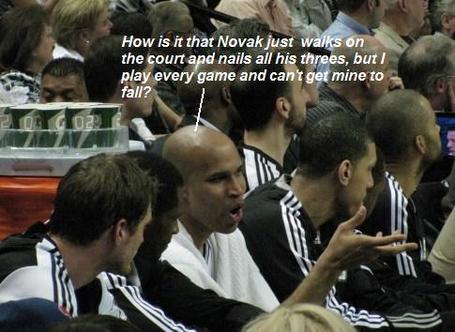 Gary Neal would also find his shooter's touch, going 5 for 7 with 15 points. He and Novak left Charlotte defenders worrying where was the next bomb coming from. 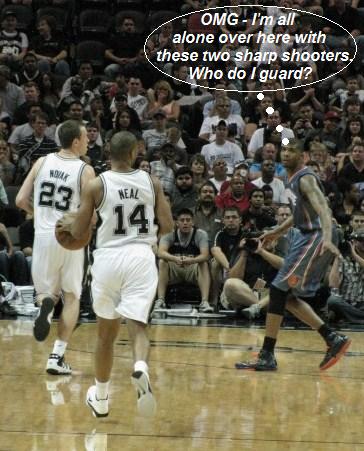 The "young uns" were really enjoying the extended playing time. 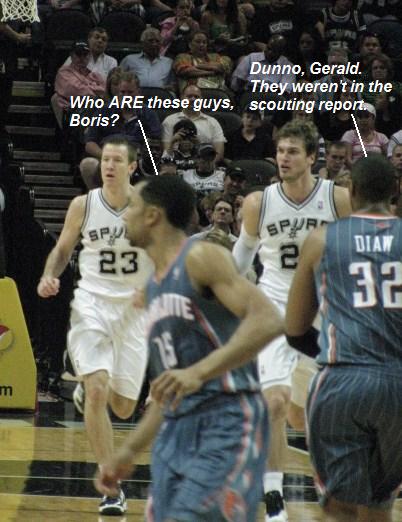 I like the challenge of getting in really close with my camera while not losing the focus. And Manu is still "The Man." I just hope Tiago was watching how he shoots free throws! ( and Manu's parents are still visiting) 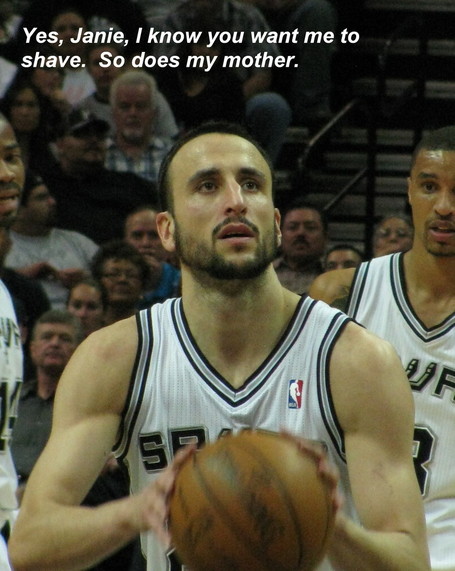 Yes, Steve, your mother would be proud! 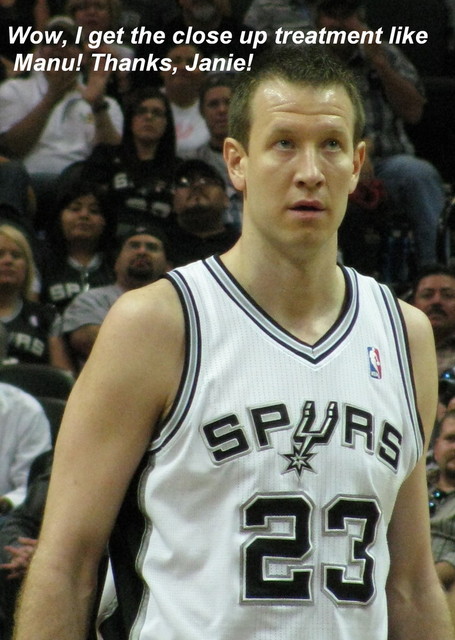 And what had Timmy acting so "goofy" during a timeout? His wife was taking his two kids to the family room and he spotted them about 20 feet away. He blew kisses and waved to all three of them. Later in the game, he and Antonio would laugh and joke on the sidelines during a timeout. 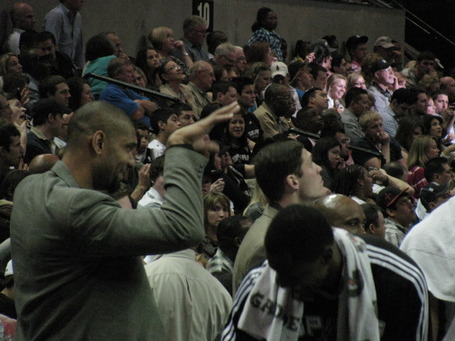