Game #61 Preview: Spurs @ Cavs - Getting back on track

Share All sharing options for: Game #61 Preview: Spurs @ Cavs - Getting back on track

Spurs are back on the court after physical win and an embarrassing loss against Memphis. The Spurs will be looking to add to Cleveland's woes by taking this SEGABABA. The Cavs haven't exactly been have a good year (understatement, I know), but they have beaten the likes of the Lakers, Celtics and the Knicks twice. They are even playing .500 ball over their last 6 games. Meanwhile, the Spurs are really missing Tony Parker. Let's hope they can get some better offensive production going tonight.

I feel bad for the Cavs, I really do. They tried really hard to be good and just didn't make the smartest moves and then they're best player jets on national TV no less. I was thinking if the Spurs had won last night that this team could sneak up on the Spurs tonight. It would have been a bad situation for the Spurs after playing last night and then playing the Cavs, who are probably playing their best basketball of the year.

All of that said, it could still be a trap game.

I'm not sure how many of you have been to Cleveland, but it's really pretty nice, during the summer anyway. They even have a giant stamp near downtown. 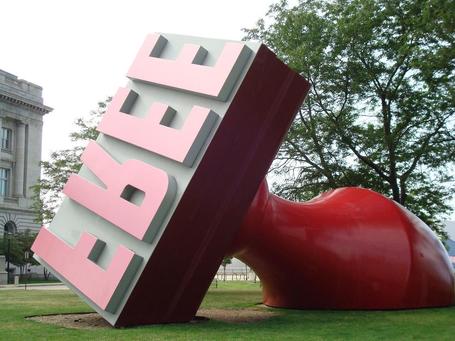 Yeah, so there's that. Here's some music for your enjoyment:

On to the preview:

PG:Parker needs to dominate Fisher with mind tricks. Hill will need to have a better game than he did last night. The good news is that the newly acquired Baron Davis isn't nearly as active and the Grizzlies guards. I think Hill will bounce back and have a nice game.

SG: Manu said "It wasn't that Tony was out, it was that the people in didn't play well." The Sickness is probably the most competitive Spur. I look for him to wear out the Cavs tonight.

SF: Rage didn't play real well last night either. I'd hope he can win the match up with Eyenga, whom I've never heard of. RJ should put as much pressure on the young Cavs as possible.

PF: I thought Blair played well last night, but he didn't get much burn from Pop. I don't know if Blair is wearing down or Pop just wanted to save him for tonight. I think DeBeast should have a very solid game taking advantage of the lack of depth in the front court for Cleveland.

C: If Manu is the most competitive Spur Duncan is not far behind. I'd look for Timmeh to take it right at Hickson and Company. Hopefully, Duncan will get more rest than last night and it will be the good kind of rest.

Former Spur Alonzo Gee should see some playing time as should former Longhorn Daniel "The King of Cleveland" Gibson. There really isn't much going on for Cleveland's bench. The Spurs are playing a little short with Hill in the starting lineup. Splitter looked fairly good in his return last night. I'd look for the Spurs to really press their advantage here.

I seem to remember Pop having some titles and Scott not having any.

The Cavs are really bad. Take a look at those stats up there. Yikes. The Spurs will be angry for only after that really ugly loss last night.

Spurs have been really good at bouncing back from losses.

Spurs, and it's not close.

Key 1 - 3 point shooting - The Cavs are bad at shooting the three and even worse than the Spurs at defending it. Let's see if Bonner, Neal and Co. can get going.

Key 2 - Ball Security - The Spurs had some trouble the last few games with turnovers. Memphis is the best in the NBA at forcing TO's, but the Spurs should be able to do better. I see them improving tonight.