Tony's magic silver sneakers were back, but they weren't the only thing shiny about the Spurs in defeating the Mavericks. Every time the Mavs made an attempt to shine themselves, the Spurs would answer and the Mavs eventually faded. This photo I took of the sidewalk as I walked to the game turned out to be a great predictor - look closely! 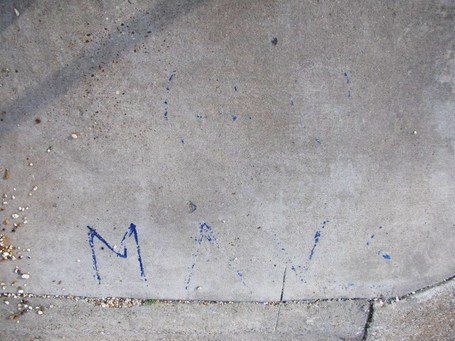 Again, the "Beat the Spurs" signs were out on display. I saw several Spurs fans fold them in half to display just the Spurs portion. 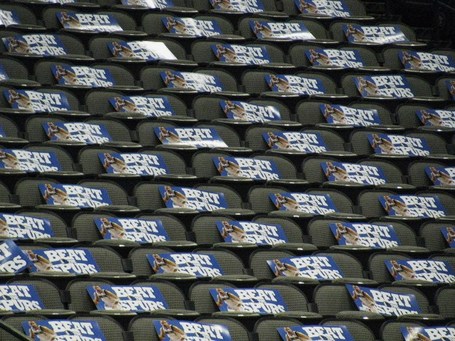 And Champ, the Blue Pony, was posing for photos with the kids before the game. They really need to get him a new costume. And he can't hold a candle to the Coyote when it comes to having personality. 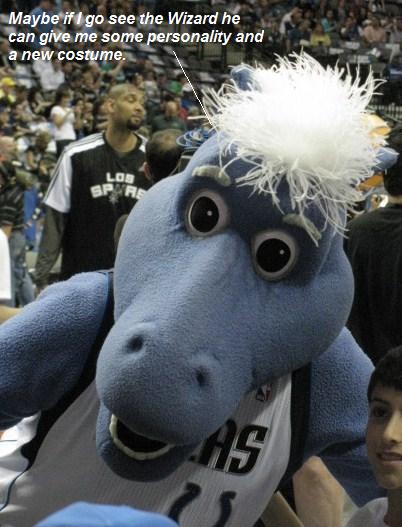 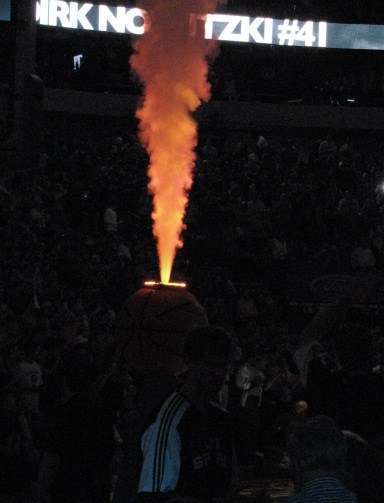 The last photo displayed was this one of Coach Carlisle. In a way, I am glad the Spurs don't put a giant head shot of Pop on our lighthouse. 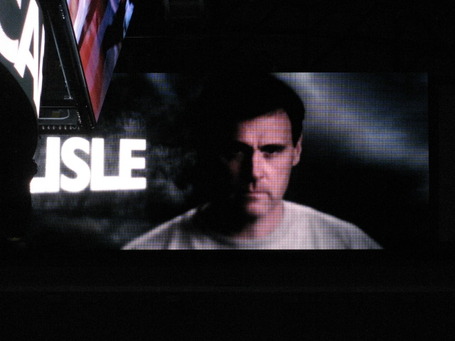 As the teams get ready to take the court, Dirk is all smiles. 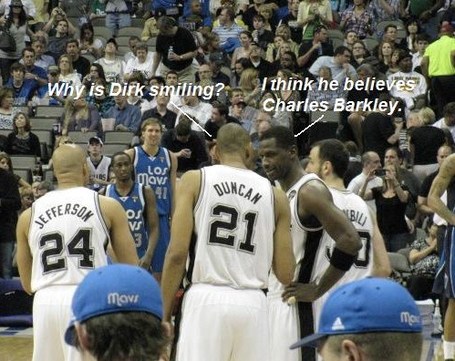 Jason Terry will have to wait a while to catch the Spurs. Here he's just trying to catch up to Tony after a turnover, one of 4 for him and 19 for the team. 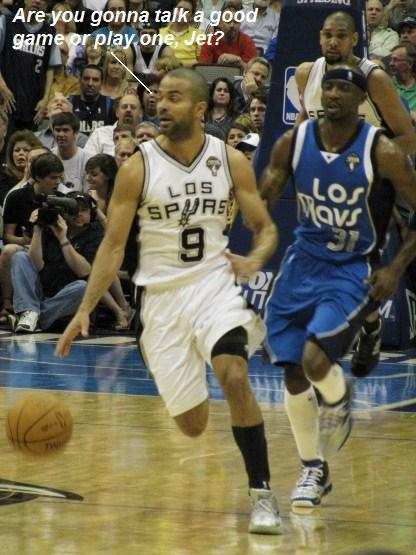 The Spurs Big Three were not going to be denied tonight. Timmy was playing like a kid again, throwing in shots from in and out of the paint. 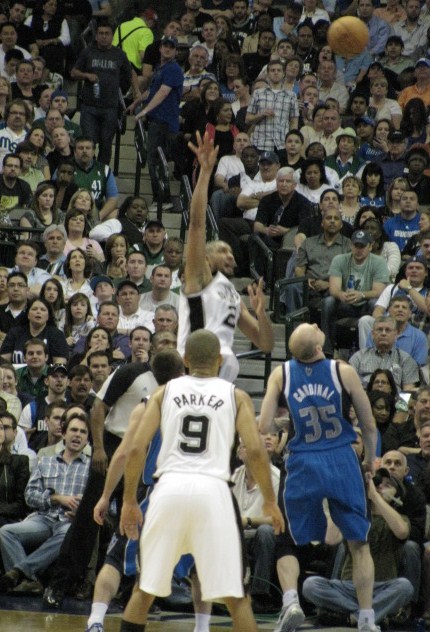 Tony was almost unstoppable in the paint. 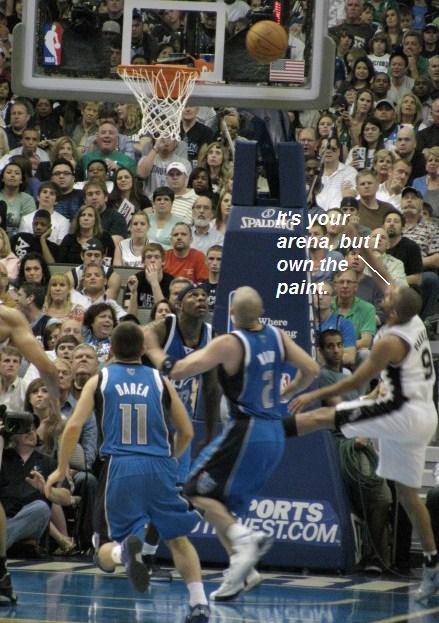 Tony definitely has swagger in this photo! And Timmy, I just want you to bring back the skeleton shoes! 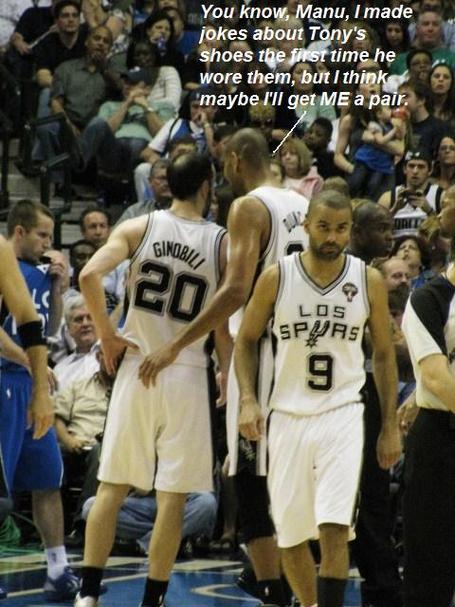 And Manu, well, he was Manu - driving the lane, draining threes, setting up teammates (5 assists), stealing the ball (3), and even a blocked shot. 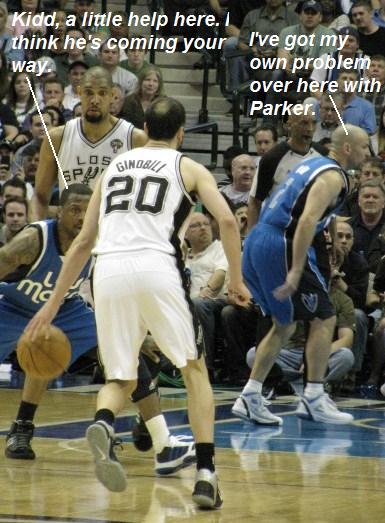 When the Spurs needed key shots to stop runs by the Mavs in the 3rd and 4th quarters, Manu silenced the crowd. 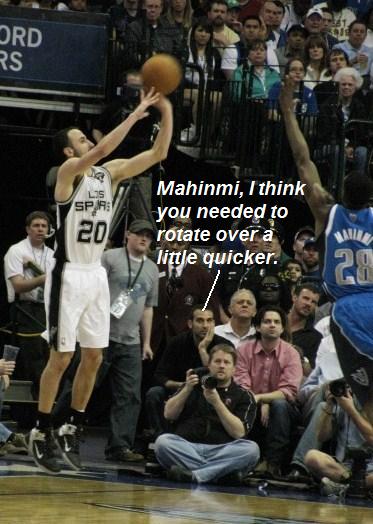 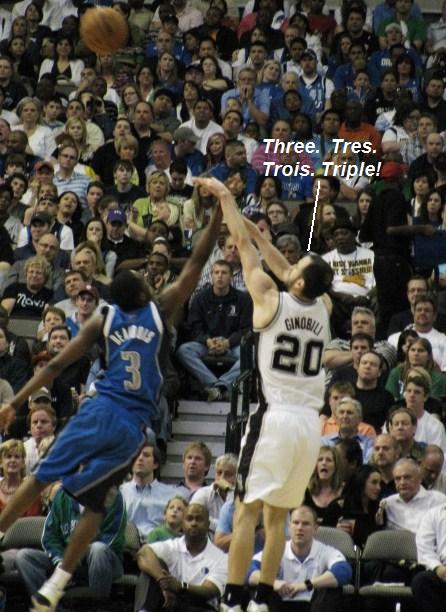 In the first half, Manu was knocked hard to the floor on a fast break by Dirk (flagrant foul), and Coach Carlisle got a technical to go with it. As Manu waited to inbound the ball after making the three free throws, Carlisle was none too happy. 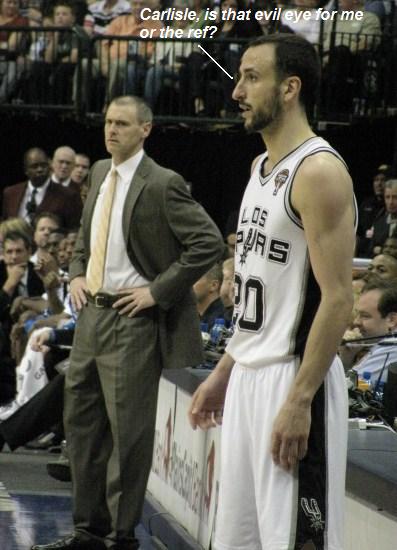 Manu did not let the flagrant foul deter him, and neither did the memory of that broken nose in last year's playoffs. 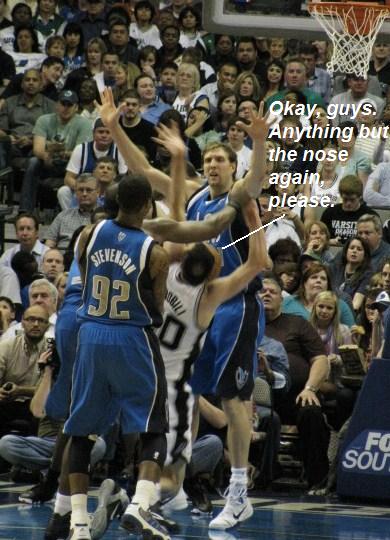 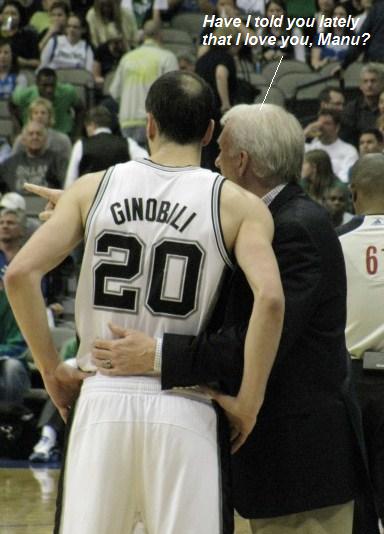 After being called out by Pop in his post game comments in Miami for his lack of defense, Bonner tried valiently to stay with Dirk. 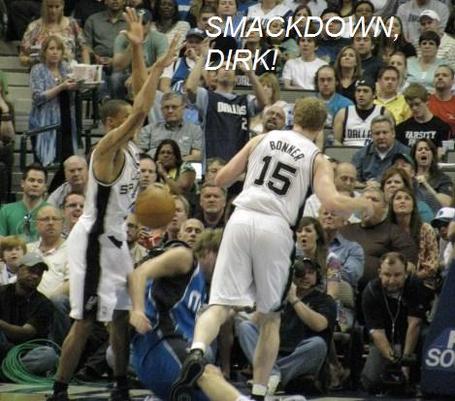 And Pop may have worried that he had created a monster . . . 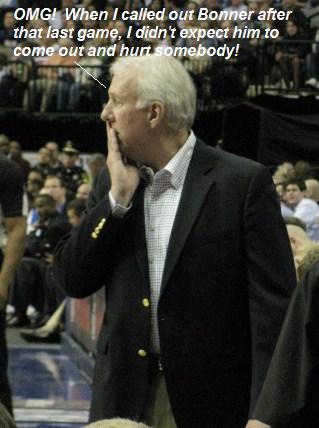 Antonio McDyess would play excellent defense against Dirk, and grabbed 6 rebounds, blocked a shot, and snagged 3 steals. He didn't score, but that wasn't his primary role in this game. 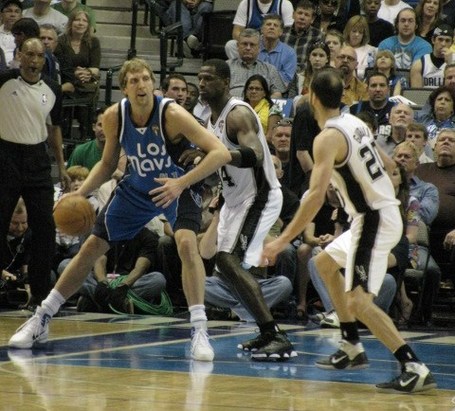 There was no call on this play as the two fought for position for a rebound. 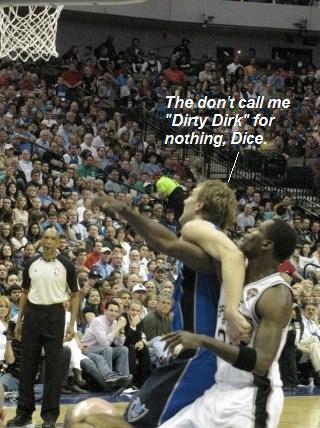 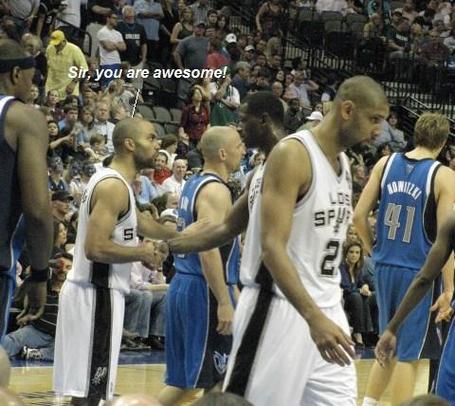 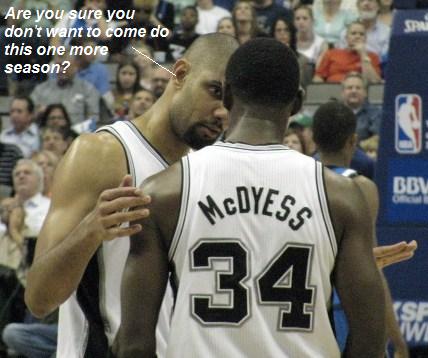 Perhaps the turning point in the game was a McDyess steal followed by a pass to Manu for a dunk with 3:17 left in the game. There's a lot going on in this photo: McDyess is being congratulated for the steal and the pass, Manu is getting high fives for his dunk, The Mavs Maniacs are stunned, the drumline is silenced, and the fans are beginning their exodus. 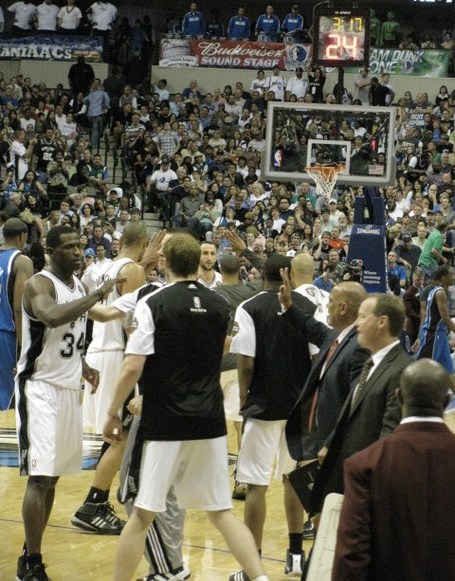 The exodus was going on all over the arena . . . and I don't see anyone texting to have lunch with Jet at Chili's. Ah, the optimism of youth. I actually turned to the Mavs fans beside me and wondered aloud why anyone would leave with that much time left. And the Mavs did close it to four with :38 left. 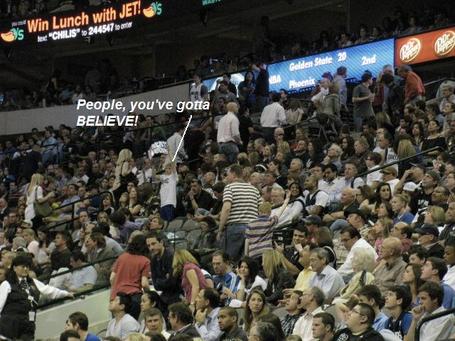 And what did Mavs owner Mark Cuban have to say about all of this? I don't need to add a caption - it's pretty plain to see. 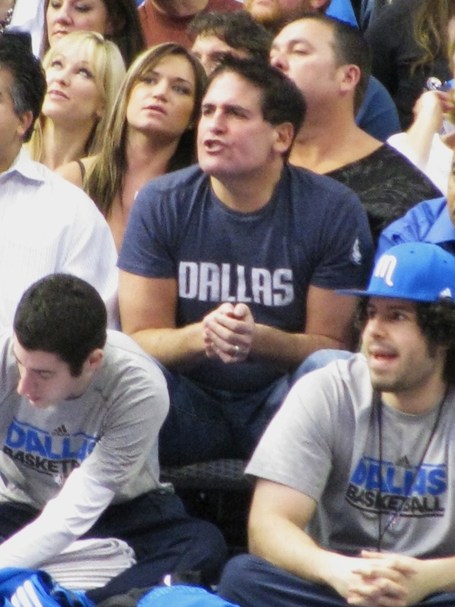 This fan had it all covered. 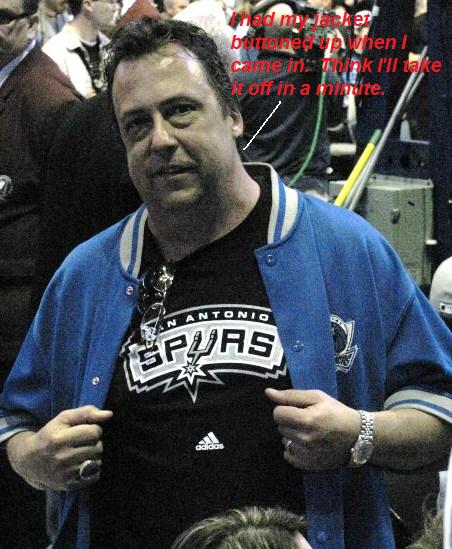 And on my way back to the hotel, I spotted this sign. I just had to mess with the quote from Haywood. 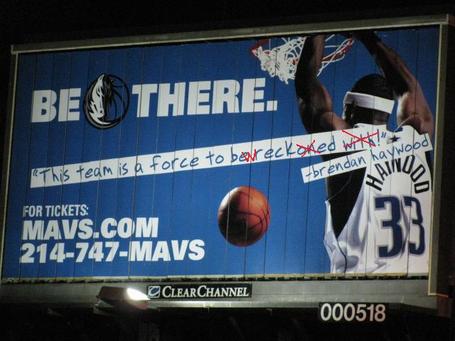 And now, I have to drive back through Austin to San Antonio for tonight's game. Maybe I'll get some photos of Tiago and Anderson tonight!