Oh Maverick, why do I hate thee so? Looking objectively over this intense set of feelings I harbor about you, I have to admit that this animosity is not entirely... rational. Maybe making a little list and examining each entry can help me enter a more enlightened place when it comes to the Mavs. Clarify some things. Won’t you join me? This may be good for both of us.

So there may be something to this. It was the late eighties. I loved the Spurs, she loved the Mavs. For a brief time, we loved each other. Sure, it’s been decades now and I should probably let this go. Is there a part of me that feels that extra thrill of gladness whenever her team loses? Is there a little voice somewhere in the back of my mind that says, "OK, you moved on from me. But your team has never moved on to a championship"? Yes. Yes there is. Am I proud of this? No. No I’m not.

Maybe the Mavericks’ logo is just so fun to look down upon with derision. This is probably just going overboard. Sure, light royal blue and spring green are not the manliest of colors next to black and silver. But, really, I just should not indulge in the childish fantasy of digging my big bad spurs into that tame, whimpering horse. Not when the horse is already this cute and cuddly: 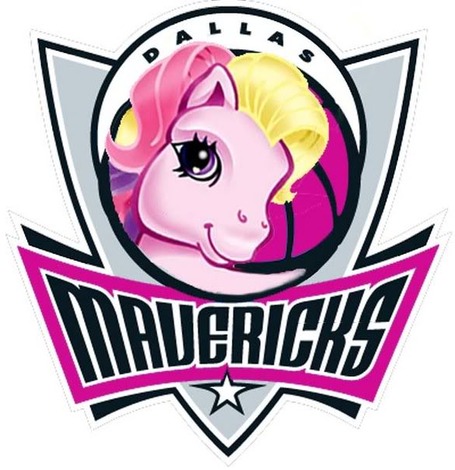 Game seven. Manu hitting the big potential game-winner, then fouling Dirk. Avery Johnson. Some painful twists and turns in that series, no doubt. But that was five years ago. The Mavs went on to make Dwayne Wade look like a champion. We still lead the Mavs in titles, 4 - 0. Dallas is still the only Texas team without a title. Come on, psyche, let’s put this baby to rest, shall we?

The City of Dallas

OK, now I think we’re getting somewhere. Dirk Nowitzki. I have to double check how to spell his name every time I type it, and I think this may be indicative of some deep-seated hostility. Great shooter. Solid rebounder. Runs like a robot. Flops on every shot, whether or not there is a defender anywhere in his vicinity. Defensively... did I mention what a great shooter he is? Let’s just say I am not a fan, and move on.

Why do I let Jason Terry bother me? He has hit some big shots in his career. Perhaps these big shots have never quite been consummate with his big mouth, but I really should look past that. Whatever a player needs to get motivated, right? Self, don't be a hater.

Speaking of childish behavior, there is this guy. Cuban is... well, Cuban is hard for me to look past, I have to admit. But I should be the adult here, and take a more mature approach to the guy. Maybe Mark would have been better off in a simpler time or place. I could see young MC growing up in a tribal culture, away from the encroaching distractions of the modern world. A natural place, a sacred place. When the strapping MC stepped into manhood, he would have done so consciously, perhaps undergoing an ornate and arduous ceremony, then going off on his own to live off the land and choose a name. Fierce Stallion. He would leave the tribe a child, but return a man. Alas, our big little Mark lives in the time of dot-coms, reality television dance shows, Rogaine, and Twitter. Things could have been so different, MC.

To sum it all up, I think it really is me, not you, Maverick. I’ve got some issues, OK? I hope this doesn’t mean that we can’t still be respectful and polite. You’ve got your dreams of glory, as do we all. Best of luck to you tonight, big fella.

Phew, I feel a lot better. On to the game!

So I thought I would place some music here. Never tried this before, but here goes:

If just one person got something from that video, I'm happy. The song is "Horses," my tribute to the Mavs. If you aren't familiar with Patti Smith, that's a shame. She is kind of the Godmother of punk, a double reverse David Bowie, and she is still an incredible musician, poet and performer, thirty-five years after this video was shot. Artistry and longevity, you can coexist.

OK Spurs fans, let's do this!

PG: Parker needs to dominate Fisher. Kidd just keeps playing, at a high level and with a lot of fire. Parker is having, in my opinion, his best season ever.

SG: Beaubois has been back for a short time, and the Mavs are still working to incorporate him into their lineup.Looks like he's doing pretty well. Manu is Manu.

SF: Brewer started the other night, but only played five minutes. Perhaps Marion starts in his place? Nod goes to Jefferson.

PF: Nowitzki looks like he is back to his old self. Tim is still searching for some offensive consistency, but anchors the defense. Come on, Timmy!

C: Chandler has been great for the Mavs this season, bringing a lot of things they can use come playoff time. The Spurs center position is a bit enigmatic right now, with the lineup change. I think things shake out well long term, but right now the Spurs are figuring things out.

Although our bench has been a strength this season, it is in a bit of a slump right now. On paper we have superior depth. But our boys have to play. Matty, George: I'm talking to you.

Rick Carlisle is a solid coach. Pop is still the master.

It's Spurs and Mavs. Lot's of rivalry here, plus we ended their season last year. Should be fun.

The Mavericks are 6-4 over their past ten games, and the losses have been close. I'd say they are feeling pretty good about themselves. The Spurs are unhappy with recent trends and looking to recharge and build towards a playoff run. Does that start tonight?

48 Minutes of Hell - Find out all about THE GAME over here.

Spurs Nation - Lots of excellent reporting on all things Spurs.