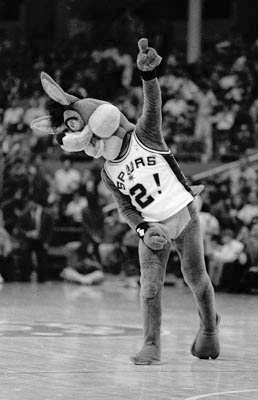 What? You really expected me to open with a photo of David Robinson slamming a dunk on Karl Malone!? Wellll,... it isn't officially a Spurs home game until the Coyote appears on the court.

Unless I was waiting in line to use the men's room and missed it: the announcer hasn't introduced the starting lineups, the National Anthem has yet to play and the refs are still in a pre-game huddle nowhere near ready for an opening toss.

Granted: While the Coyote has made the craziest, most acrobatic dunks making Blake Griffin look like a schoolyard amateur, he has never officially scored a single point, been credited with a rebound or made an assist; and he certainly has never blocked a shot. On the bright side, neither has he turned the ball over or been called for a foul, team or personal, during a game. Not to mention, there is at least an outside possibility he has created enough subtle (or not) distraction to keep an opponent from making a foul shot.

The Coyote was, however, officially ejected from a game once in 2005 for "arguing" with a ref on the baseline. I personally know how he must have felt about that call!

But that is NOT all there is to basketball. When it comes to intangibles and mojo, no one is better at creating them than the Coyote. In other words, the Coyote brings an unparalleled level of chemistry to the Spurs team and to the fans. He has received countless accolades both locally and nationally.

With all the changes in ownership, front office, coaching staff and players in the twenty-eight years since the Coyote first appeared in the Hemisfair Arena, he has been a constant. He has become the most recognized representative of the team, not only during their home games, but also in the Spurs organization's many community activities.

While I was photographing the Spurs, I occasionally had encounters with the Coyote but never knew the true soul that brought him to life. That soul's human identity remained anonymous to the public and the media for twenty plus years. As a matter of fact, his (her?) identity was such a well-guarded secret it seemed entirely possible few of the Spurs' employees knew it. I often wondered if the payroll office knew, and imagined the paychecks made out: "Pay to the order of The Coyote." I heard rumors he was actually paid with sheep instead of dollars.

The Coyote first made an appearance at a Spurs game on April 13, 1983. On February 13, 2004, the soul of the Coyote, Tim Derk, suffered a massive stroke. Tim's wife, Colleen, and the Spurs publicly revealed his true identity for the first time. Following intensive medical care and rehabilitation, Derk was able to return to the Spurs front office as the Director of Mascot Development.

Since recovering from the stroke, Tim has published a memoir that is highly inspirational: Hi Mom, Send Sheep: My Life as the Coyote and After (Trinity University Press, 2006, available from Amazon.com* and other sources). If you want to understand what really makes the Spurs tick as a team and as an indispensable part of San Antonio, read this book.

I could be greatly mistaken because I am a relative newbie to Pounding the Rock, but the accomplishments of the Coyote have largely been overlooked on this site. It is time he receive the level of PtR recognition he deserves.

Without further ado, and with the total lack of authority vested in me, I hereby award Tim Derk and The Coyote:

The PtR Award for Mascot Excellence 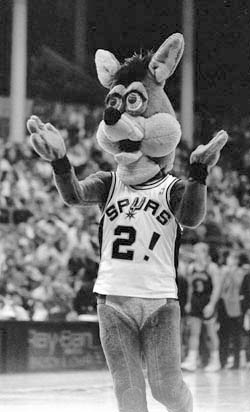 A Photo Tribute to The Coyote in his Natural Environment 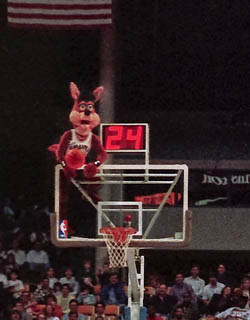 The Coyote's acrobatic skill is legendary.

Anyone can throw chalk dust in the air. A back flip off the scorer's table is far more impressive. 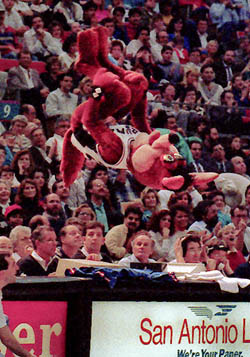 And the Coyote has ball handling capabilities (using all four paws, no less) unmatched by any other NBA mascot. 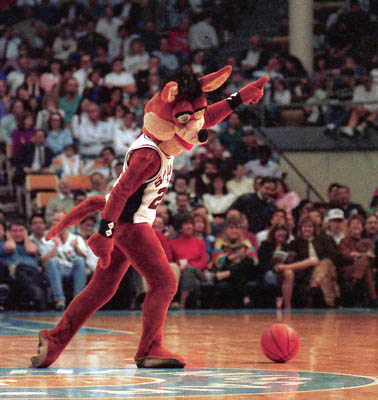 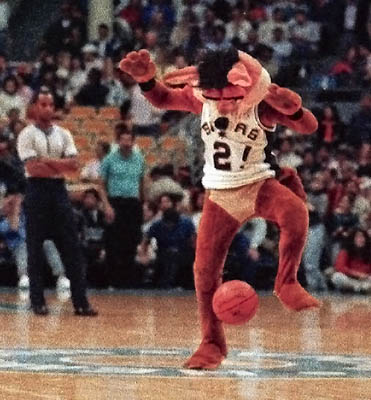 (See how impressed the ref is!?) 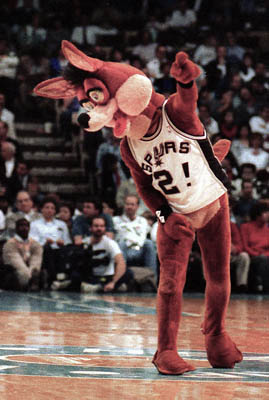 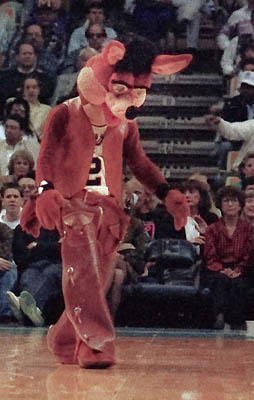 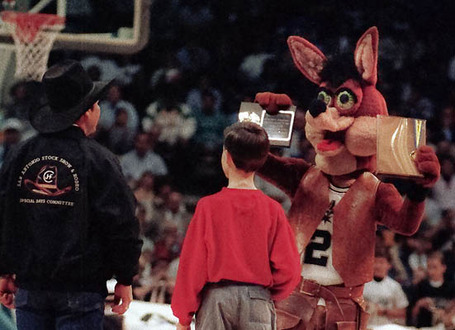 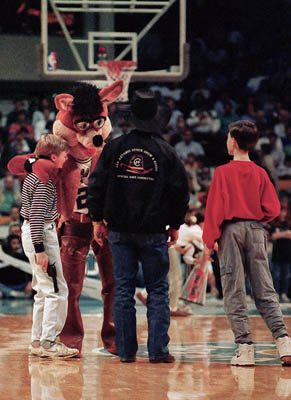 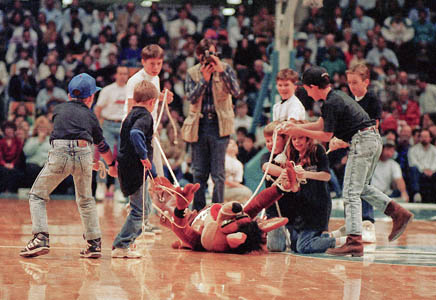 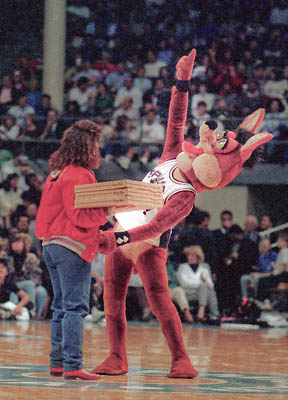 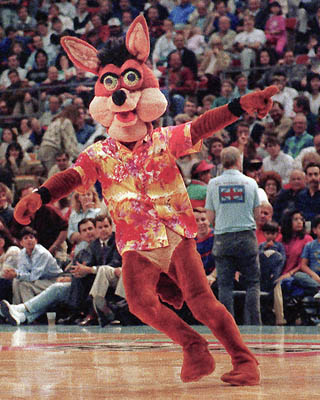 The key to making any character come to life is believability. You must have the complete package and capture the imagination of the public. Tim definitely had that. No one ever thought about the guy behind the mask, because the Coyote had enough personality of his own. To this day, the thought of the Spurs without their beloved Coyote is something most Spurs fans could not fathom. He is an integral part of the San Antonio community.
- David Robinson (from the introduction to Hi Mom, Send Sheep.) 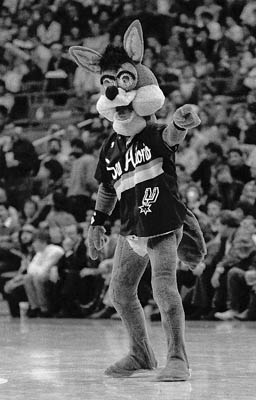 Author's Note: My plan is to post a new story with photos from the '89 - '90 Spurs season about every four to six weeks. Theses stories will be about the Spurs team and its history, and about individual players. Unless otherwise credited, all of the photos are my own.

* Amazon.com has been showing "Only 1 left in stock--order soon (more on the way)" for Tim's book for almost a year. I don't think they ever updated that.