While driving back from the Spurs' game in Houston last Sunday, I noticed a small sign along the edge of highway 290 in tiny Carmine, Texas: "Texas Basketball Museum." My curiosity was piqued, so I turned around and followed the arrow to a small brick building one block off the highway. A woman emerged from a second car parked in front, and we discovered that the museum was closed, but a sign on the door gave a phone number to call with a promise that someone might be able to open the door. She called, and owner Bob Springer drove right over and let us in. I spent a delightful half hour or so talking with Mr. Springer and viewing the exhibits. Join me on a mini-tour. 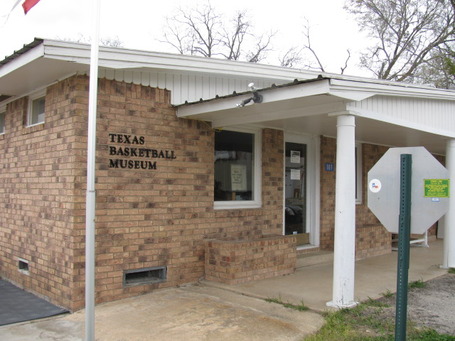 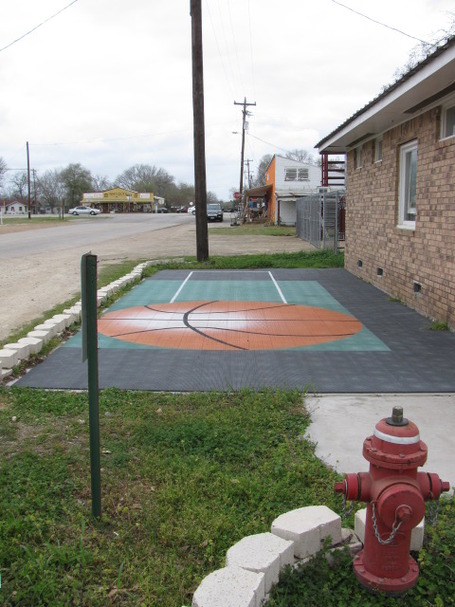 The museum presently occupies two rooms: an exhibit room and the Texas High School Basketball Hall of Fame Room. The Hall of Fame is sponsored by the Texas Association of Basketball Coaches, and inducted its first group of honorees in 1971. It honors both coaches and players (eligible 15 years after they graduate). The Hall was formerly housed in the Texas Sports Hall of Fame in Waco, but moved to Carmine several years ago when fees to keep the exhibit in Waco became too expensive.

Outside the entrance to the Hall of Fame room are plaques displaying Mr. and Miss Basketball for the state of Texas. You will recognize several of the Mr. Basketball honorees as NBA stars: 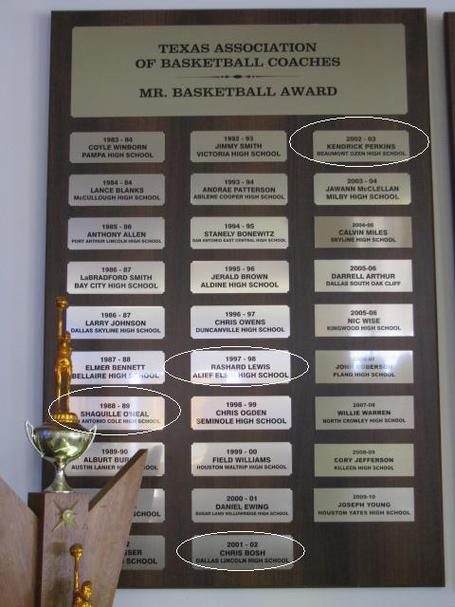 Each year, 5 to 7 new inductees are added to the Hall of Fame. Having worked with boys basketball teams in Austin for much of my teaching career (videotaping games and keeping the official book), I recognized many of the names on the wall.

Bill DeWitt worked for the same oil company as my father and sister in Midland, Texas. I baby-sat his two children. After starring in high school in Waco, he went on to a career at Baylor, being on the Bears team that made the NCAA Finals in 1948. 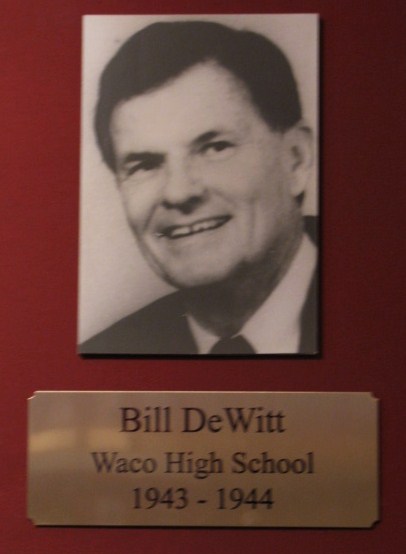 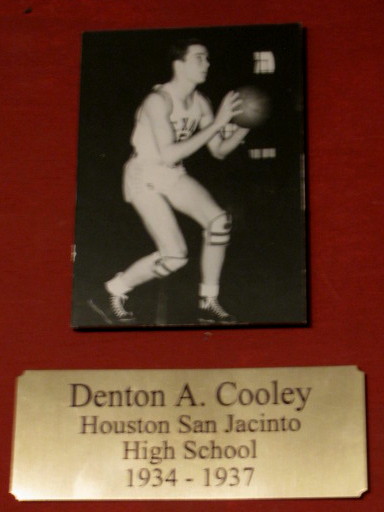 Clyde "The Glide" Drexler was a star at Houston Sterling High School. 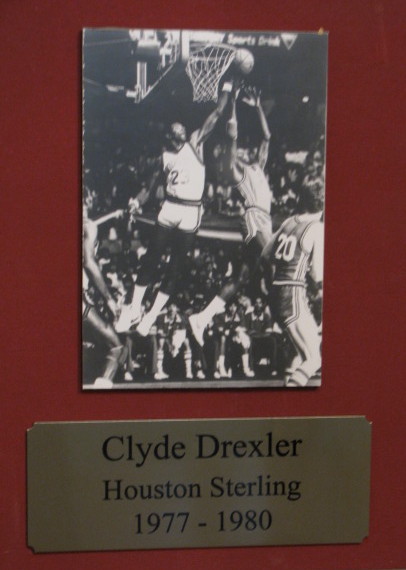 I also found the names of several coaches with whom I was familiar, another star from Odessa who regularly beat up on Midland High School, and a plaque for an old beau, Larry Franks, who played for UT.

A large glass case in the center of the Hall of Fame room houses memorabilia of Rashard Lewis and Shaquille O'Neal. Lewis played his high school ball at Alief Elsik, and Shaq played for San Antonio Cole. 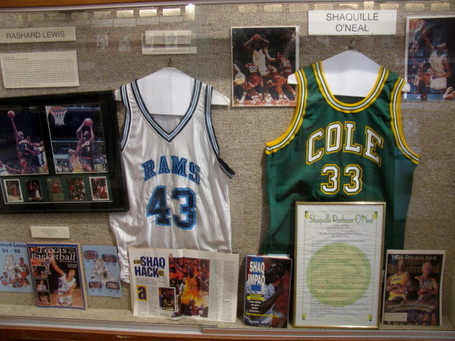 A large framed display honors Snook High School. Competing in the classfication for the smallest schools in Texas, Snook won 90 games in a row and reeled off a string of 7 consecutive state championships beginning in 1978. 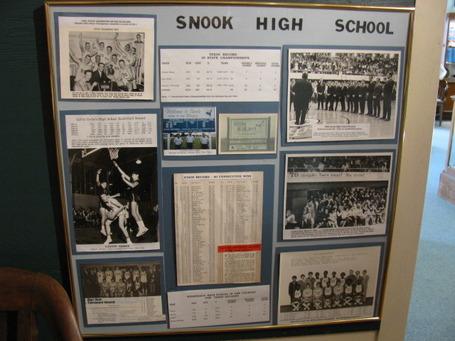 For information about this year's Hall of Fame inductees, as well as a list of all past honorees, visit the website of the TABC: TABC Hall of Fame.

The other room of the museum houses some of Coach Springer's 40-year collection of basketball memorabilia. He has plans to expand the museum to display more items, but what he has on display is amazing.

One case holds Spud Webb items. Webb, born in Dallas, was one of the shorter NBA players at 5'7", but he won the Slam Dunk Contest in 1986. 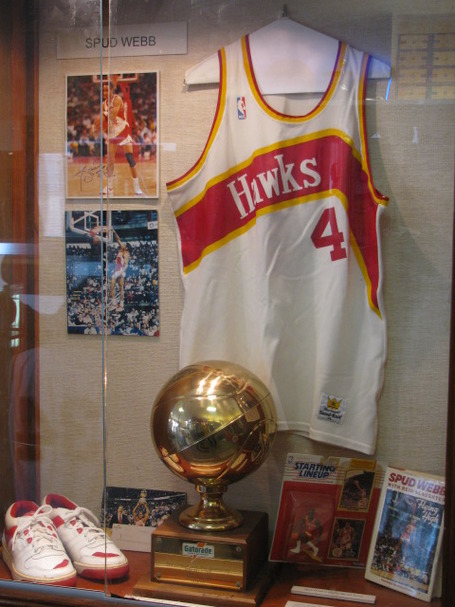 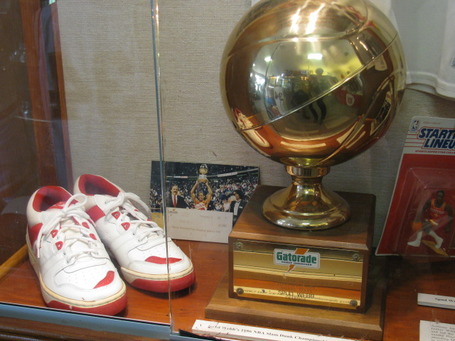 Old basketballs, with laces, are on display. The old ones were made of leather with a cloth liner and had a rubber bladder inside to inflate. This first one bears the signature of Red Auerbach. 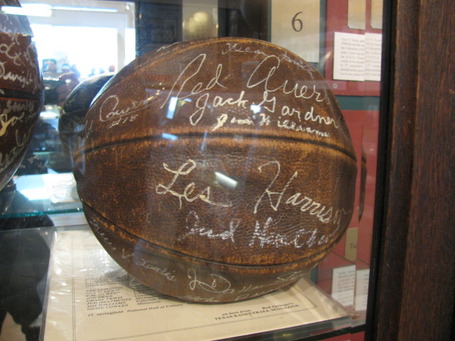 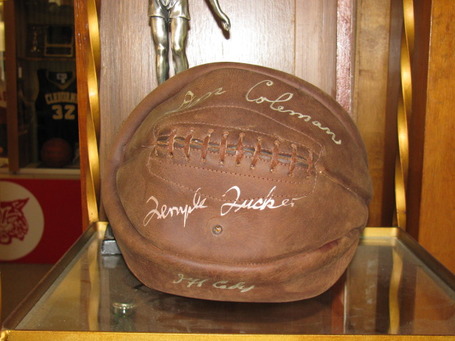 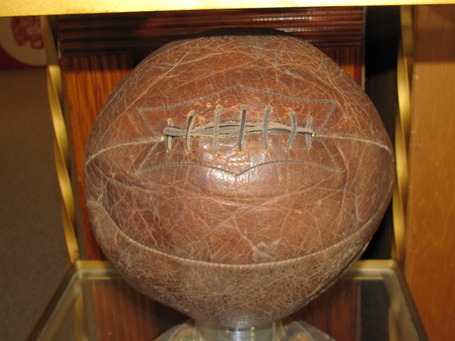 This one appears to be made of something other than leather - 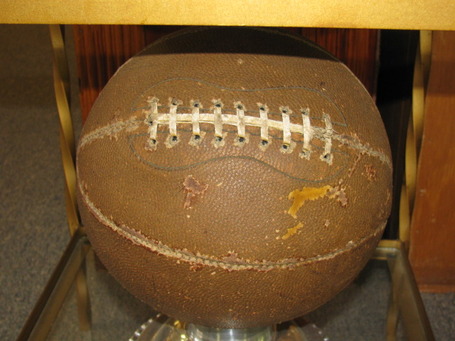 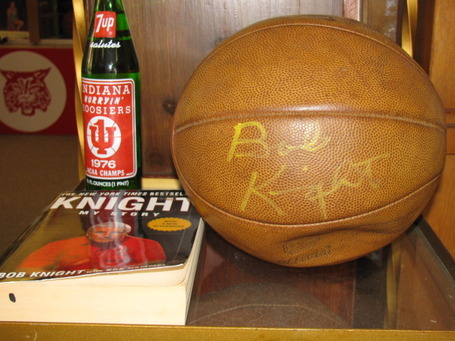 One case holds a display of 150 whistles and other referee items. Sure Joey Crawford would want a special plaque for his! 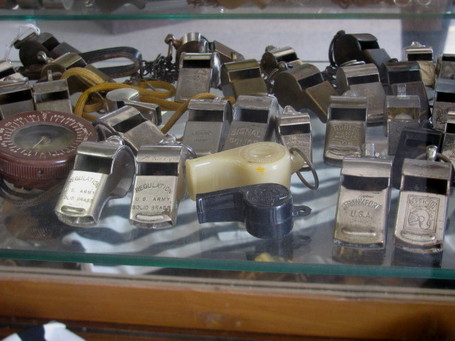 Basketball games are displayed in another case. 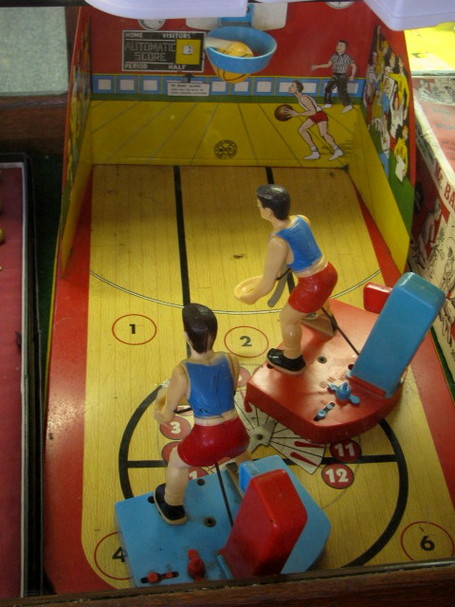 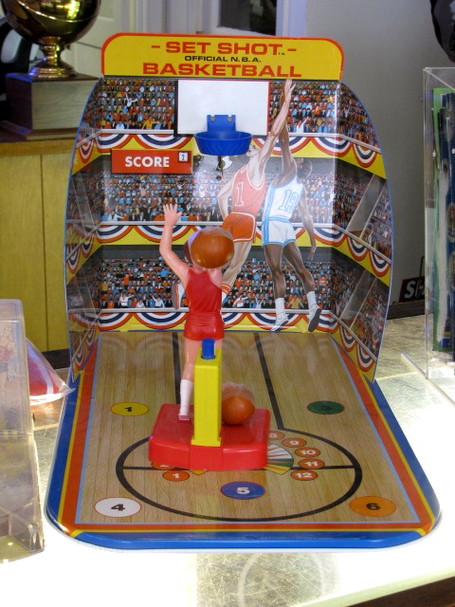 If you've ever wondered how to play the game, this old instruction manual by Spalding should help. 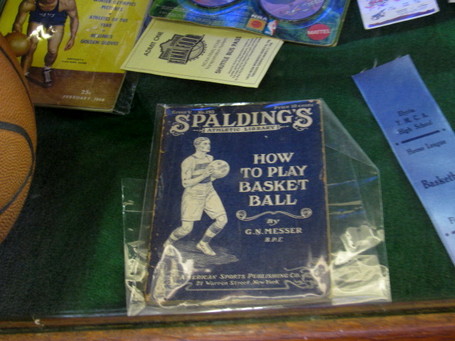 I drooled over the collection of basketball charms. I have a few old ones myself and wear them on bracelets to Spurs games. These share a case with an old iron rim. 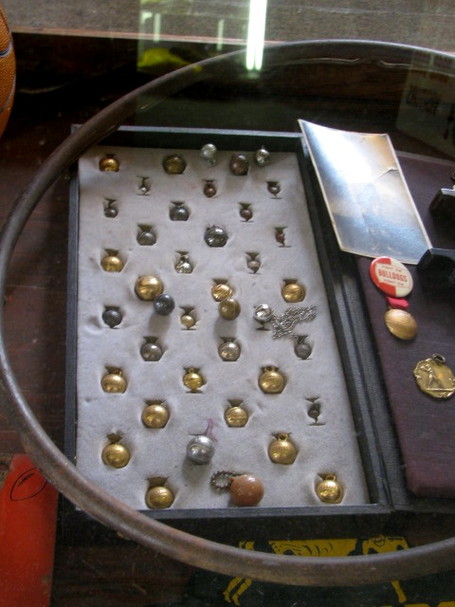 If you ever owned a pair of Chuck Taylor Converse All Stars, this neon sign will bring back memories. 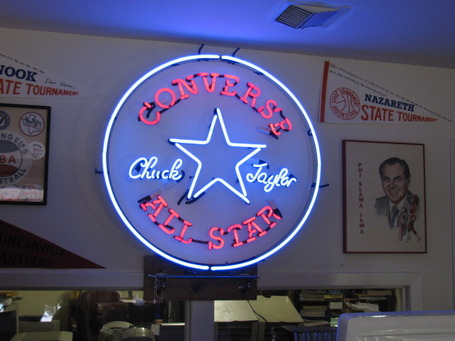 Uniforms have changed through the years. Aside from the shorts becoming longer, the early ones were made of shiny satin (this one probably from the 50's). 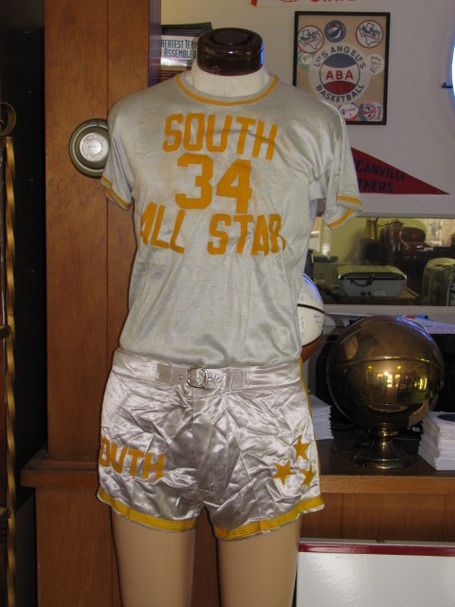 A later All Star uniform when the fabric switched to polyester. The synthetic, engineered-to-be-cool, jerseys of the NBA today are a far cry from these, which did not breathe much. 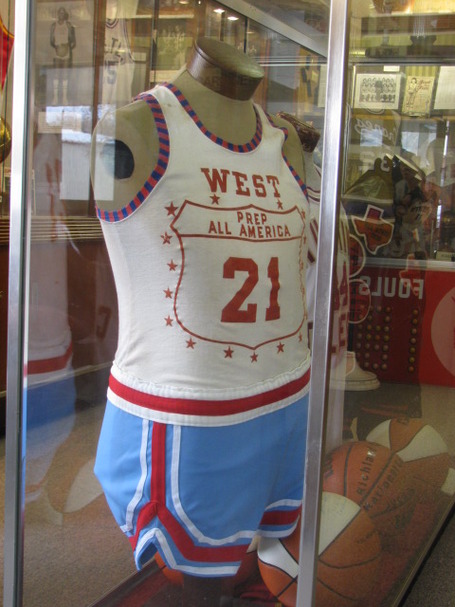 This calendar towel is imprinted with the names of NBA teams - no Spurs yet, as they are not in the league in 1972. The Cincinnati Royals were in the league from 1957-72 (before that they were in Rochester) before moving to Kansas City and eventually becoming the Sacramento Kings. The Buffalo Braves (1970-78) moved to San Diego, becoming the Clippers (1978-84) before settling into Los Angeles in 1984-85. The Seattle Super Sonics (1967-2008) relocated to Oklahoma City and become the Thunder in 2008-09. 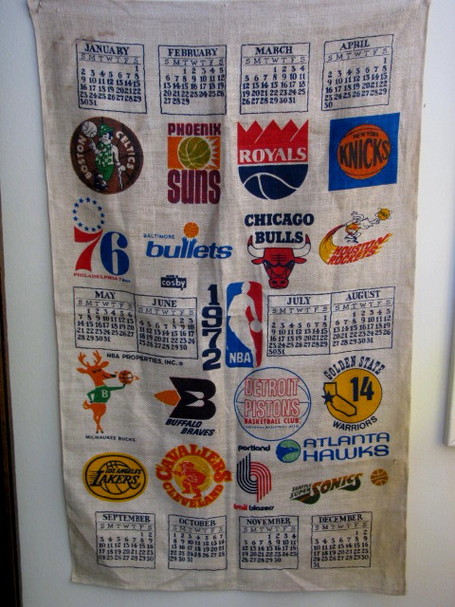 Springer publishes Texas Basketball Magazine, devoted to coverage of high school ball in the state. His website has a page devoted to the museum. Texas basketball

If you want to visit, the museum is located in Carmine, Texas, at the corner of Augsberg Avenue and Haupstrasse Street one block south of Highway 290. Carmine is half way between Austin and Houston, halfway between Brenham and Giddings, and precisely halfway between Ledbetter and Burton. Carmine is a tiny town known best for its antique shops, so if you guys take your wife, also take your money!

Presently, the museum doesn't maintain regular hours, but you can call ahead for an appointment, or just call Bob Springer when you get there: (979) 278-4222. I intend to go back soon - there's a lot to see and many stories to be told by Coach Springer.