An Avatar is worth a thousand words

Share All sharing options for: An Avatar is worth a thousand words

In the spirit of our previous navel-gazing post about usernames, I have decided to do a follow-up on the images each of us has chosen to associate ourselves with. From The Augustus's regal and ancient bust of Caesar, to the bemused koala bear of greyberger, there's something for (and from) everybody, and a story behind each image. Here's mine.

A few years ago I had the pleasure of working with a man named Sameh, who was one of the most natural salesmen I've ever met. He was originally from Egypt and, boy, was he a worker. One of those people who seems to be naturally driven, he was always on the phone, and we eventually became good friends. He was warm and approachable, and he had a way of continuously complimenting you, yet without it ever seeming forced or artificial. We worked accounts together and there was a particular deal that we lost, so he sent me an encouraging email with a picture from the latest Superman movie in it. Ever ironic, I replied with an image from Arthur Miller's, Death of a Salesman. We had, after all, lost the sale, which is decidedly un-super. 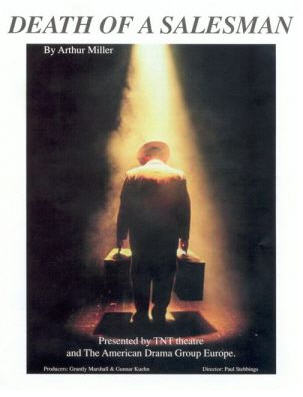 We had a laugh about it and went on with our day, but whenever we wanted to needle each other, or mourn the loss of a sale, or pretend that there was just too much pressure to go on, we would send that image to each other.
You may not be familiar with the plot of this particular play, but it's incredibly bleak. The main character (I can't bring myself to call him a protagonist) has continually deluded himself to the point that he's completely out of touch with reality. He has brow-beaten his wife, alienated his younger son, and idolized his older son to the point of ruining him nearly beyond repair. He eventually decides that all he's worth is the insurance money he would leave his family upon his death. It's a grim statement on the American Dream and, because the kind of people who give out awards like to wallow in material that makes them feel depressed, it won Miller the Pulitzer Prize in 1949. So you can see how the image could have encouraged a bit of melodramatic humor.
About the time the Spurs won their fourth championship, another friend of mine would constantly accost me with tales of San Antonio's new acquisitions. While I had no great love for the NBA off-season, I did want to learn what I could about the new guys that would be joining the team, and so I started lurking on PtR, among other sites. By the end of the 2007-'08 regular season I could resist no longer, and I decided to write my first fanpost on my lunch hour. When it came time to create my account, I already knew what my username would be, but when I thought of posting it without an avatar, the salesman image came to mind. Once he was cropped to remove him from his depressing context, he didn't seem morbid to me anymore. He was almost moody and mysterious. Regardless, I'd come to like the image and always figured I could switch to another if I ever felt like it. That has turned out to be exceptionally difficult to do. As often as I've tried to test out other avatars (as recently as last summer) I just can't seem to let the old guy go.

So, now that you know why you've come to identify that little suitcase-carrying guy with jrw, it's time to share your story, £ers. Let us know what's with that avatar, and why you chose it.