As good as things seemed after the San Antonio Spurs' previous win over the Miami Heat, that's as bad as they can appear now after being blown out in Miami. But neither the Heat nor the Spurs are as good or as bad as they were in their respective wins and losses. It's a good thing that there are three off days for the Spurs after this game. Coach Pop is sure to make every single point that he wants to; about defense, about execution, and about intensity - and be sure to have plenty of time to make it, and all the attention he requires. With the playoffs looming, there couldn't be a better time for the proverbial wake-up call. If there's anything we know about one Gregg Popovich, it's that he knows the Spurs' number.

What's that you say? Each team won on their home court by the same amount, whose 30 points are more important anyway? The Spurs have the league's best record and this was just another regular season game, so we shouldn't read too much into it? Ok, then explain away the fact that the Spurs were just blown out for the 2nd time in 8 days. Explain why the Spurs allowed the Heat's tight defense, their own missed shots, and the calls going against them, to take them out of their game to the point they did. Explain why Pop didn't do what he's done all season, and pull the starters when the game got out of hand. It's more than just having Tue-Thur off.

Now I'm not trying to tell you that the sky is falling. That would be ridiculous. But it's certain that the team didn't respond well to Miami's surge. They didn't circle the wagons and defend with energy and sharp rotations. They didn't run their offense as they have all season. When they did, they got open looks. Sure, they didn't all drop, but they were there. This loss wasn't an X's and O's triumph for Miami. It wasn't a testament to their superior athleticism or younger legs. No. This game was about drive, passion, and the willingness to play all out.

Maybe you'd say that's what the playoffs are for. Well, I'll concede that point. This game doesn't mean more than a single tick in the Loss column, but I guarantee you that anything Coach Pop wants to communicate will be absorbed by willing ears between now and the Mavericks game on Friday. And if there's one thing this team has done after every big loss they've suffered, it's bounce back. I'm sure you'll see a different team at the end of the week. Bring on Dallas.

If it was up to me, that's all you'd get. But because Hirschof is awesome, you have the following breakdown of the game to peruse and enjoy. Please be sure to thank the Colonel for me the next time you see him.

San Antonio started the game off with great ball movement and aggressive cuts towards the basket. The Spurs didn't settle for on one-on-one matchups and every shot was an open one. The Spurs had 8 assists on 9 field goals. Defensively, the Spurs didn't give the Heat any easy looks and did a great job shutting off lanes to the basket and cleaning up the boards. Bosh got some open jumpers off of collapsed defense. The Heat tried to get cute on a few passes, such as a James tap back pass to a misplaced Wade. 4 TO

The Spurs stopped moving the ball with about 4:00 minutes remaining in the quarter and it showed. The Heat's defense really glued themselves to one-on-one matchups and hustled to all of the rebounds. Miami also began to move the ball much better which opened up looks in the lane. The Heat went on a 11-0 run before Jefferson hit a corner 3PT for the final made make of the quarter.

The Spurs defense has still yet to return to the game - Miami Heat are the aggressors and it shows in the FT stat line. Heat are a 14-15 at the line while the Spurs (2-3) didn't even sniff the charity stripe until 2:17 remaining in the half. Spurs defenders couldn't keep up with the multitude of pick-and-rolls by Miami and often found themselves late rushing to an open shooter or trying to shut down a path to the basket. On the offensive end, the Spurs couldn't get many looks they were comfortable with. The rhythm that was flowing so smoothly early in the game disappeared thanks to excellent defensive work by the Heat. Miami defenders jumped numerous screen attempts, blocking both passing lanes and paths to the basket. Players were either tossing up last second contest jumpers or taking shots they don't normally take. The Spurs did have several open 3PT looks but, unlike the first go-round with Miami (17 3PT), are only made one of 10 from deep. 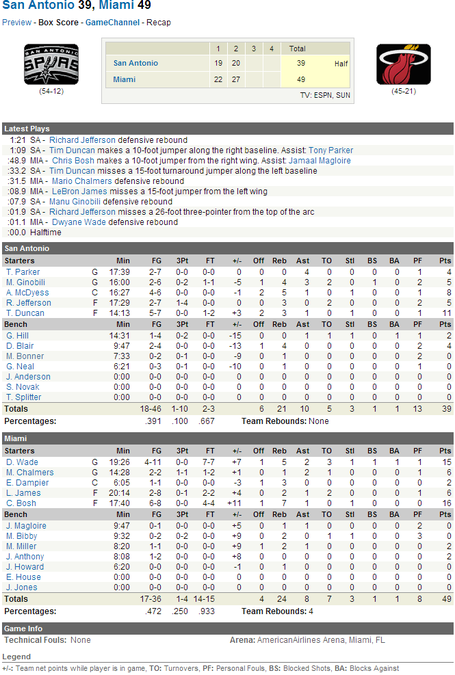 Second half, same as the first: The home team continued to dominate with aggressive ball movement and strong screens leading to making 3 of their first 4 shots, plus 3 trips to the line. San Antonio, unable to develop any rhythm, only managed to score in spurts until Tony Parker began to heat up near the end of the quarter. Parker was able to find his way to the basket on a couple of occasions, and even knocked down his 2nd 3PT shot of night, to give the Spurs a little 6-2 run before the teams traded baskets to close the 3rd. Tony scored 14 of his game total 18 PTS in the 3rd quarter, keeping the Heat within striking distance.

Remember those 14 points Parker scored in the 3rd quarter? Well, he managed exactly 0 the rest of the way, and the entire team only posted 17. Miami's defense kept up the hustle they had displayed all night. There were no open looks to the basket, passing lanes were nearly shut down completely, and the Spurs couldn't hit a shot, contested or not, to save their lives. About half way through the quarter, it had become apparent which team still had energy and a willingness to play. Coach Popovich finally pulled the plug on this abomination and cleared the bench with 3:46 remaining in the game. It is my hope that Pop left his starters in a bit longer than usual in this kind of situation in order to put a chip on the team's shoulder. 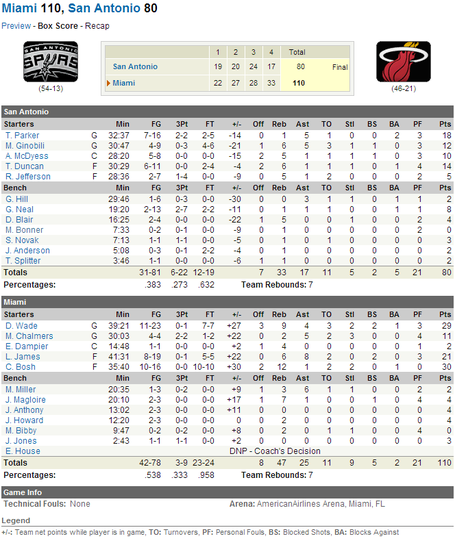