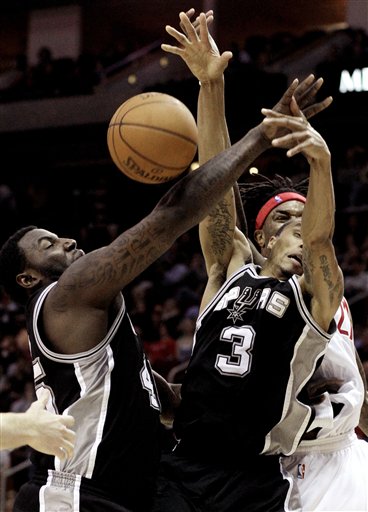 'Twas a mighty struggle for Texas.

If you want to be all neat and OC about it, you can probably divide basketball games into separate categories such as blowouts, nailbiters, unwatchable, bizarre, etc. And then there's also the throw-everything-out-the-window-including-the-stat sheet games. For the San Antonio Spurs, these usually come against their Texas co-habitants such as the Dallas Mavericks and in this case, the Houston Rockets.

While the previous night's match against a young Sacramento team came down to the final minutes yet proved to be painful to watch, the equally youthful Rockets squad promised more of a challenge owing to its roster filled with players who are wired to play hard every night. They may have presented a stark contrast to an organized, methodical Spurs unit, but these Rockets have their own style that masked their immaturity relative to the Silver & Black's championship experience. After all, who's afraid of a Yao-less team whose starting center is just about as tall as a small forward and have no All-Stars on the roster? Yet just like the Spurs' tried and tested lying in the weeds strategy, the Rockets possess deceivingly good talent to take down unsuspecting teams coming down to Houston expecting a cakewalk.

I'm feeling like the effects of a SEGABABA too after recapping the last game, but first, here's a tune to set the mood (if you hate Kanye, watch it for Zach):

(as a prelude to more mindless drivel in the actual 'cap)

I've been thinking about something during pre-game. Has there been any team who has won an NBA title without getting a franchise-type player through the draft? In the last decade, the Lakers won multiple rings with Kobe as their draftee and added Shaq in the mix via free agency. The Spurs, of course, had Tim Duncan. The 90s Houston team had Hakeem Olajuwon. The Boston Celtics had Paul Pierce before bringing in Kevin Garnett and Ray Allen via Kevin McHale's generosity and Celtic-green blood. The only exception to that list would have to be the Detroit Pistons, with Joe Dumars hitting the jackpot after mix-and-matching a bunch of league misfits into one cohesive unit.

The still fairly young MIT Sloan Sports Analytics Conference, an annual meeting of statistical sports junkies in a "dorkapalooza", passed by the PtR community about a week or two ago without nary a word. It's surprising for me mainly because of two things: 1) the Spurs are one of the early teams who've managed to successfully harness the usefulness of stats as a way to build its team; and 2) as much as the use of stats has been the Spurs' past and present, I expect it have a much bigger role in the future as well, as the team's reliance on numbers should increase after Tim Duncan retires.

Houston Rockets GM Daryl Morey is widely considered as today's NBA poster child for statistical obsession in finding the right players, while his team has served as a model for a few years now of how to stay competitive without having a franchise player or a high draft pick. Without Yao Ming to anchor the Rockets' smart, hardworking collection of complementary players, the team has been largely mired in league purgatory -- on the outside looking in when the time to discuss contenders surface as the season winds down.

I know it's still too early to talk about Tim Duncan retiring, but the Rockets somehow present a peek into the Spurs' future should the GOATPUFF retire, and if RC Buford insists that tanking for a high draft pick -- as the team has done before to nab Duncan -- is not an option. We have a great team of role players and still two stars in Manu Ginobili and Tony Parker that ensures playoff contention until they retire as well. But after that? Even statistics might be hard-pressed to predict when the Spurs' next championship will come. 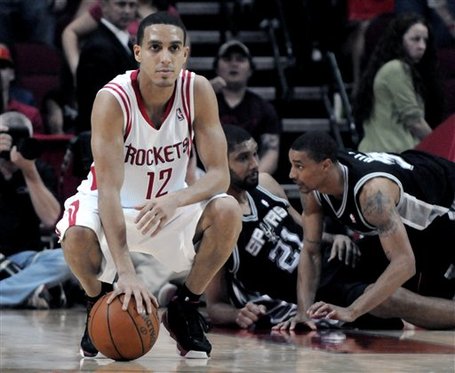 The Timbo Point: The Ice for Dyess Movement Marches On

As for THE game, our team somehow felt a little uneasy about themselves after playing such a dud versus Sacramento that they got out of the gates promising a return to early season, fast breaking, free-wheeling, LOL-bounding, defense-forgetting basketball. The Rockets, meanwhile, knew what to expect -- Parker and Ginobili slicing and dicing into the lane to create havoc -- and prepared for it by letting someone else beat them. The lucky man for the job? Antonio McDyess.

The veteran with serious mileage and even more serious injury history has been only three games into his newfound starter's role, and there are still a lot of watchers who feel that the move might be damaging to the confidence of a young sophomore DeJuan Blair, who has held the spot all season long until the Lakers beatdown. If Pop starting Blair for the most part of the season has been called as a bluff and finally exposed by the better teams, then choosing McDyess to accompany Duncan upfront could possibly be the real hand that the coach will stick to up to the every end. Which means, sorry old timer, but you probably won't have a lot of DNPs from here on out.

But as unique a player Blair is -- arguably the shortest center in the league who plays much bigger and taller than his height suggests -- SAM's skills also bring a different look to the table. Jordan Hill insisted on leaving Dice open to help on defenders, and the old man made hay by knocking down jumper after jumper. The man is so nice, he just wanted to keep the defense honest, just like him. Dice's outside shooting forced the Rockets to finally open up the lane, and his board work, together with Duncan, revived the fast break. It's surprising to see that the Spurs only had 10 fast break scores (compared to Houston's 13), since the game's pace made it seem a lot more.

It didn't matter as Rockets defenders were content in letting the Spurs score and score easily inside, ending the 1st quarter with 36 points -- the most allowed by Houston in a quarter this season. The offensive brilliance would continue until the second quarter, as the Spurs erected a 10-point lead, 59-49, at the half. The possibility of cruise control beckons, as the Spurs went along with and beat the Rockets at their go-go-go style. What else can the Silver & Black do wrong except maybe play Steve Novak and Chris Quinn together?

Daryl Morey does not pick his players for no particular reason. Tim Duncan is a player who is as efficient as they come -- every shoulder rotation, each sway of the hip, and every movement of a joint all seem to have a purpose. Similarly, every Morey drafting, trade, signing or acquisition has its own purpose. Provider of offense? Check. Cover areas for toughness and defense? Check. Heart, hustle and grit? Check. Underdog mentality? Check. Will always play hard for 48 minutes? Check!

And that's why even when the lead got to as high as 13, we all knew the Rockets were never out of it. After a blazing surge left the Spurs players coughing and choking from the smoke, Houston found itself atop by 1 at the end of the third quarter thanks to Kyle Lowry's buzzer-beating three. It wasn't just a ball game now, it was a dogfight. It wasn't about their places in the standings nor who has the gaudier statistics nor who has the more expansive wine collection at home. At this point, it was, as cliche as this may sound, about who wanted to win more. Three quarters in, it looked like the Rockets were the hungrier team. As I said earlier, just throw the damn stat sheet out of that window. 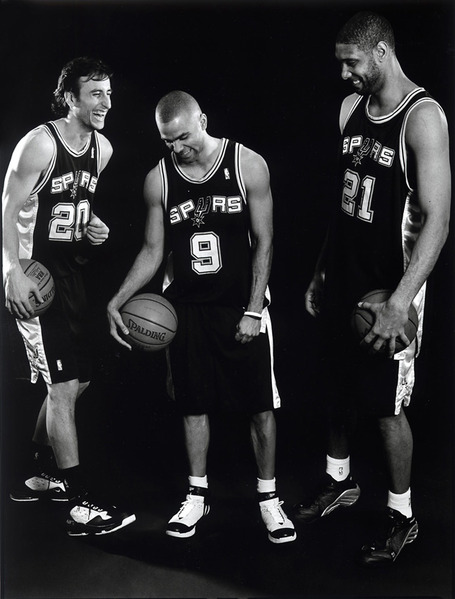 I like this picture. Very much. That is all.

The Sultans of Swag?

How do you define the word "swagger"? In today's mostly posing and preening league of young stars, the word embodies bravado, confidence and whatever synonym you can think of that makes a man feel as if he is king of the world and Gulliver aught nothing but a weak-minded traveller. Do the Spurs, as humble and professional as they like to present themselves to the world, have any trace of this swagger concept? PtR founder Matthew Powell/sungo has brilliantly written that our flashiest player, Manu Ginobili, is ironically bereft of this trait. But the Spurs as a team? I probably wouldn't say the same thing.

San Antonio knew that the Rockets don't fold like a Jason Terry paper airplane. Morey made sure to assemble fighters, not quitters. But the Spurs also have enough confidence that they can always will themselves to win, not because they are more talented or have more veterans, but because this season, they have been winning personified. Call it Charlie Sheen-ic to an extent minus the hashtag, drugs and hookers, but when excellence has become a habit, finding the extra gear to put yourself over the top becomes easier and easier to find. This, perhaps, is swagger in its purest, most unadulterated and non-media hyped form -- one that does not need to be shown, but rather borne out of reflex and genuine self-belief.

After a crazy tough fadeaway jumper by Manu Ginobili to tie the ball game that made even the incredibly homer-ous Clyde Drexler shake his head in disbelief, the old rookie Gary Neal confidently burned the net on a jumper to push the Spurs into the lead for good, 91-89. Even a first-year NBA player has caught on to the team's cold-blooded winning ways.

But perhaps the personification of this surprisingly and exceedingly consistent Spurs season has been Richard Jefferson, whose athletic talents have been reduced to mere role player status in his short tenure with San Antonio. Rage has learned how to pick his spots at the right times, showing it in the fourth quarter by calmly sinking a jumper and two clutch free throws to keep the hard-fighting Rockets at arm's length. He hasn't scored much nor had the ball in his hands for a reasonable period up to that point, and still nobody saw a guy of his caliber whine about it. And yet, his play, especially his defense, was as every bit as important to the team's success tonight. I guess winning begets winners, no matter the circumstances.

3 -- BAM. Yeah, what a cop out, I know. But George Hill played well and again scored timely buckets when we needed them the most. Blair also had a good time against an undersized Rockets front line, while Gary Neal still remains a big free agent steal. Also, Steve Novak played meaningful minutes. Enough said.

2 -- The Big Three. I cheated and made them into one entity. After all, they are "the core". They played up to expectations and did what they had to do to let us earn the W.

Up Next: @Miami Heat. The Heatles will be out for revenge. Will real, team basketball prevail once again over its mutant, iso-filled version? For the sake of the sport's future, I hope so.