Share All sharing options for: Game #65 Recap: Spurs shake off Kings behind Parker and Ginobili, 108-103 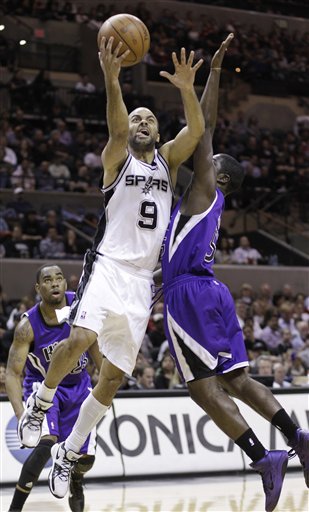 In a 24-hour period when an unexpected tsunami caused horrific tragedy in Japan; "The" Jimmer Fredette scores a career-high 52 points for BYU in a conference tournament; the NFLPA de-certifies to signal the beginnings of a lockout; and the Boston Celtics, the team with the second-best record in the league, loses to giant killers the Philadelphia 76ers, there was a similarly bizarre game going on in the confines of the AT&T Center in San Antonio, Texas.

No, this did not rival the more pertinent issues that the world is struggling at hand to cope with, but nevertheless, it served as a fitting curtain call to the San Antonio Spurs' four-game home-stand that saw the team rise up to the highest of emotional highs, suddenly come crashing down after a good ol' fashioned basketball mugging, and still struggle against an inferior opponent despite burning the hoop with fiery, unprecedented accuracy. The Spurs' narrow win over a perhaps distracted Sacramento Kings team -- beset with a cloud of Stern-ian uncertainty threatening to uproot the team in Seattle-like fashion -- failed to elicit a lot of positivity heading into a three-game road trip against very stiff competition.

Before I breeze through a recap of a forgettable win, if it isn't such a crime to describe it that, something a little old and mainstream from the AAR:

Pounding the rock can get boring sometimes

If competitive people preach that "winning is everything", why does it sometimes happen that winners get tired of winning? Maybe it's not because the fun is completely lost out of notching these wins, but more comparable to the effect of a routine wearing out someone who yearns for something different.

The Spurs are now at 53 wins (3 wins above last season's total) with still 17 more games to go -- an impressive turnaround. As much as people have praised the organization for being business-like and almost ruthlessly robotic in its approach to posting one winning season after another, it's still good to know that they are human and prone to faltering and slowing down once in awhile. However, the die-hard fans in us that can't get enough of victories (and actually seek more blood after every scalp collected) will often scoff at the thought of dips in performance. I wouldn't be surprised if some of us were expecting another but more spectacular highlight of Manu Ginobili taking out yet another wayward bat that dared to wreak havoc in yet another a Spurs-Kings game. But alas, not only is it human to err, but also mortal to covet in excess.

The game did not expose new facets of the team, as much as it proved that an 82-game season is not only a lengthy grind, but also an exercise in patience and retrospective consideration. The first three quarters played are largely forgettable, and can be easily summarized on the Spurs' end with two adjectives: sloppy and unfocused. The Kings, meanwhile, were reckless yet free-spiritedly determined -- qualities which are often found in a young team struggling to put talent and discipline together as if each player looks like a multi-cornered puzzle piece. 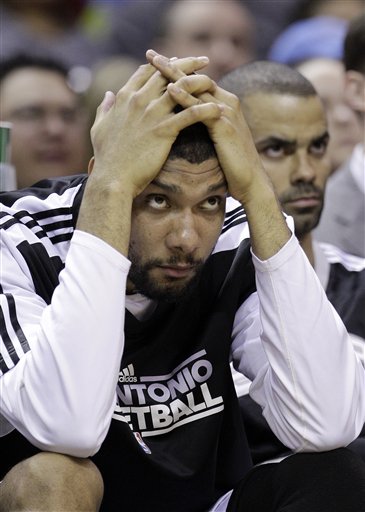 Timmeh wanted to hide from the spate of turnovers.

You Are What Your Stars Are

The all-over-the-place nature of this game, along with (inter- alert!) intermittent interruptions in my internet connection, admittedly caused my attention to drift at times, but for all the distractions, games like these continue to enforce a long-known belief: our stars are really good. Not exactly the mind-blowing conclusion one would normally expect after such blather in the previous paragraphs, but it is one that's probably equally etched in my mind as hard Jacob Riis's legendary rock.

Despite scoring 27 points on 11-18 shooting, this was NOT one of Tony Parker's better games. Nor was it representative of how he's grown this season. It was more of a testament to how unique of a player he is in today's guard-glutted NBA -- probably the number one or two player in the league who can get to the rim and finish shots with big man-like efficiency. The fact that he is only 6'2" and not exactly blessed with a stodgy, Deron Williams-like physique makes him even more impressive. TP did a lot of dribbling in this match, which killed a the kind of beautiful ball movement the Spurs have been known for. And he missed a wide open Gary Neal on a couple of drive-and-draws. I would've accused him of selfishness were it not for his effective scoring forays, including a scorching night from downtown. And while he did have six assists, the more telling stats are the team-high five turnovers he committed as a result of needlessly prolonging his floor probing.

The disjointed feel of this game could also have obscured Manu Ginobili's brilliance, but with that herky-jerky style and propensity to come up big in the clutch, how can you miss it? It seems as if every quarter Manu provides a highlight -- in the first, he faked pass TWO Kings defenders and shot a three, but knowing that it was short after the ball left his hands, he immediately tracked down the offensive rebound and floated up a beauty. The team coasted for most of the game, but as has been the hallmark of this year's team, in the fourth quarter, the "turn it up" key was held by The Sickness as he took over. First, he swished home a three to tie the game; then he made a smart zip pass underneath to Timmy for the hoop and the lead, and then he spilled another three ball to effectively douse the youthful petulance of the Kings. If only he made an encore of his swashbuckling bat-swat, then this game would've made the national media think more than twice about putting the aftermath of this game on their front pages.

At the end of it all, there was Tim Duncan. Perhaps secretly frustrated about his team's inability to put away a non-playoff squad, he showed the talented but mercurial rookie big man DeMarcus Cousins a thing or two about performing in the clutch on both ends. Captain Duncan steered the defensive sails into forcing the Kings to tough, contested and hurried long shots, and then on the other end, unleashed a tough, fall-away bank shot on an unsuspecting Cousins. I guess even the 82-game grind cannot match the game-in, game-out consistency of The Big Fundamental. 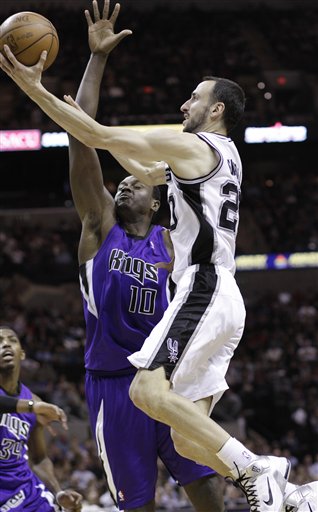 Thank god for Manu Ginobili. For these sloppy games, not so much.
via cdn1.sbnation.com

My contribution to Kings fans -- Let The Team Stay!

Before I end this and move on to other things, credit has to be given to the Kings squad for playing hard. Cousins again did not play his best, but he battled. Their bench were stellar as well, led by Omri Casspi, who is as talented as they come. Largely unknown Pooh Jeter and Jermaine Taylor shot with abandon, but showed they could play more in this league, if only the currently M.I.A. Tyreke Evans wasn't such a ball-dominating talent. The team has good pieces, and hopefully the Maloofs aren't blind to this as their surname might playfully suggest.

At the end of the day, this game will be filed as just another W and the game tape not probably used too much. Still, this is probably representative the Spurs' season more than other games -- the coasting for three quarters followed by a violent surge in the fourth to put the enemy away, the offensive strength but defensive deficiencies of the bench, Pop's season-long stubbornness to keep Tiago Splitter glued to the bench, and the camera paying homage again and again to janieannie admirably repping PtR. Pop's move of starting Antonio McDyess again at center may be the only wrinkle that spelled a difference, and can draw out words and words of debate as the schedule plows on.

Sure, this one might be a bit forgettable, but we need a few more of these to build the crescendo towards a hopefully memorable finish.

Up Next: @Houston Rockets. It's a SEGABABA and the Rockets are a fast-paced, high scoring team that remain dangerous to anyone in the league. In the Twitter words of George Hill -- LET'S GET IT!!!